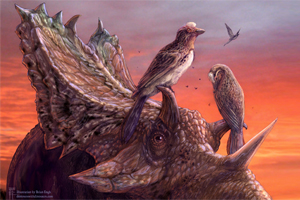 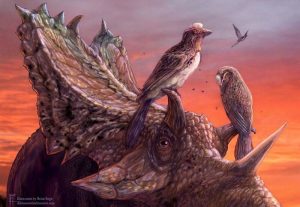 Reconstruction of a living Mirarce eatoni perched on the horns of the ceratopsian dinosaur Utahceratops gettyi, animals that were alive in Utah during the Late Cretaceous (75 million years ago). Paleoart by Brian Engh (dontmesswithdinosaurs.com)

A 75-million-year-old bird skeleton from a threatened national monument in Utah represents the most complete example ever found in North America of a long-extinct group of birds called enantiornithines. This large, fossilized bird provides important new insight into the evolution of flight. It has several advanced adaptations for flying, which show that the Enantiornithes evolved these features separately from living birds.

“The most complete enantiornithine from North America and a phylogenetic analysis of the Avisauridae” by Jessie Atterholt, J. Howard Hutchinson and Jingmai K. O’Connor, was published today, Nov. 13, 2018, in PeerJ. Western University of Health Sciences Graduate College of Biomedical Sciences Assistant Professor Jessie Atterholt, PhD, is the lead author.

Click here to read the article at PeerJ: https://peerj.com/articles/5910

Enantiornithine birds (“opposite birds”) existed during the Cretaceous. They were very successful — enantiornithine fossils have been found on every continent except Antarctica — and are known from rocks as old as 130 million years right up to the end of the Cretaceous 65 million years ago. In many ways, they looked similar to modern birds and are closely related to modern birds. They were fully feathered and flew by flapping their wings, like modern birds.

In North America, the enantiornithine fossil record is restricted to the Late Cretaceous (about 100 million to 65 million years ago). Nearly all of these fossils are single bones from the feet, so what the birds looked like is not known. In the new paper, the authors describe a special enantiornithine fossil from the Kaiparowits Formation in Utah (~75 million years old), which was named Mirarce eatoni (Meer-ark-ee). Mirarce pays homage to the detailed, three-dimensional preservation of the fossil (“mirus” means “wonderful” in Latin) and the anatomical evidence that it was an advanced flyer (Arce was the winged messenger of the Titans in Greek mythology). The species name honors Dr. Jeffrey Eaton for his decades of work as a paleontologist on fossils from the Kaiparowits Formation.

“Mirarce is unique and important for several reasons. First, it is by far the most complete enantiornithine bird fossil ever discovered in North America. We have bones from almost all regions of the skeleton, except the skull,” Atterholt said. “It is also one of the largest birds known from North America from the entire Age of Dinosaurs. Most Cretaceous birds were the size of chickadees or crows, but Mirarce was about the size of a turkey vulture.” 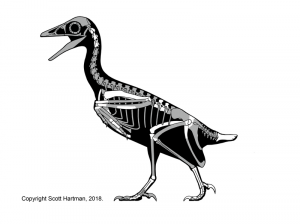 Skeletal reconstruction of Mirarce eatoni, an extinct bird that lived in Utah about 75 million years ago. Mirarce was a very large, strong flier. Illustration by paleoartist Scott Hartman (skeletaldrawing.com).

The fossil is critical to helping to understand trends in enantiornithine evolution, and bird evolution in general. Though they superficially look like modern birds, enantiornithines have many anatomical differences. Most enantiornithines had a sternum (breast bone) with a low keel and a wide wishbone. Though they could fly, they weren’t as well-adapted for flight as modern birds. Mirarce, however, reveals that by the Late Cretaceous, opposite birds had separately evolved adaptations for advanced flight, similar to what is seen in modern birds. The wishbone is narrower, and the sternum has a deeper keel for bigger flight muscles.

“What is most exciting, however, are large patches on the forearm bones. These rough patches are quill knobs, and in modern birds they anchor the wing feathers to the skeleton to help strengthen them for active flight,” Atterholt said. “This is the first discovery of quill knobs in any enantiornithine bird. Thus, we know that Mirarce was a very strong flier.”

This important fossil was found in Grand Staircase Escalante National Monument in Utah, a monument under threat of severe size reduction by the federal government. Originally discovered in the early 1990s, this find (among many others) contributed to the original establishment of the monument in 1996. Mirarce is one of thousands of fossils discovered from Grand Staircase. The rocks of the Kaiparowits Formation contain some of the best Cretaceous fossil records in the entire world, underscoring the critical importance of protecting and preserving these parts of our natural heritage. Reducing the size of the protected area puts some of the nation’s most valuable natural and scientific resources at risk.