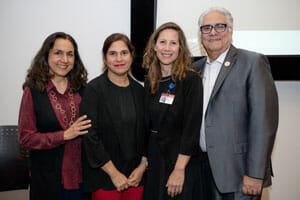 More than 55,000 people are homeless in Southern California each year, including 32,000 children. The stress of unstable housing on these children may lead to lower life expectancy and greater instances of substance abuse, depression and learning and behavioral problems.

The nonprofit Illumination Foundation provides targeted, interdisciplinary services for the most vulnerable homeless adults and children in order to disrupt the cycle of homelessness. Three representatives from the foundation served as keynote speakers at Western University of Health Sciences’ sixth Dr. Robert L. Austin Endowed Lectureship on Thursday, Feb. 13, 2020 in Pomona, California.

Grover focused on the impact childhood adversity has on development. Healthy development requires a stable and responsive relationship with at least one primary caregiver. The lack of a healthy relationship is the basis of toxic stress, which is what then leads to adversity, she said.

“When a child babbles or cries or gestures and a caregiver responds in kind, this is that important ‘serve and return’ interaction where a child really learns to develop their sense of self and learns to understand that ‘I matter. I exist. I’m important to someone.’ Very, very important in healthy development,” Grover said. “We know that early childhood experiences shape our neurologic development. We know early childhood development can have a strong impact on multiple body systems including our neuroendocrine, our autonomic, metabolic and inflammatory systems. In the first few years of life, thousands of neural connections are being formed every second. Learning occurs when certain connections are strengthened, while unused ones are pruned away. We know that healthy brain development can be disrupted or impaired by prolonged pathologic stress with significant lifelong implications.”

Adverse Childhood Experiences (ACEs) are stressful and traumatic life events experienced before the age of 18. An ACE score (0-10) provides a way to measure that adversity. The 10 ACEs are divided into three categories: abuse, neglect, and household dysfunction.

“We know that ACEs are strongly related to the development of a wide range of health problems throughout a person’s lifespan, even into future generations,” Grover said. “The toxic stress that can potentially be caused by ACEs explains profound impact on long-term development. The more ACEs they have, the more likely they are to have adversity throughout their lifespan.”

Adults who have experienced four or more ACEs significantly increase their risk for seven out of the 10 adult leading causes of death, Grover said. Heart disease doubles once you have four ACEs as compared to someone who has none. Risk of depression is five times greater for someone with four ACEs than it is for someone with none. The life expectancy of a person who has six or more ACEs may be lowered by over 20 years as compared to someone with no ACEs, Grover said.

In the U.S., 46 percent of children – 34 million – experience at least one ACE, and 22 percent have two or more, Grover said. For the population of unstably-housed children that the Illumination Foundation serves, the average ACE score at age 8 or 9 is seven, she said.

“That really takes my breath away,” Grover said. “We know children living in poverty, especially those experiencing homelessness in addition, are absolutely more likely to have higher ACEs. We know kids living below the federal poverty level are five times more likely to experience that critical number of four or more ACEs.”

The early research of California Surgeon General Nadine Burke Harris, MD, MPH, FAAP, shows that children who have four or more ACEs are 32 times more likely to have learning and behavioral problems than children who have no ACEs. Children with two or more ACEs are almost three times more likely to repeat a grade in school as a child who has none. Even having just one ACE increases your risk of lifetime asthma by almost 28 percent because of the effect ACEs have on the inflammatory system, Grover said.

Bhalla next talked about the population of children served by the Illumination Foundation in Orange County. One in five children has a diagnosable mental illness, 150,000 children have a diagnosable mental health disorder, one in five children in Orange County goes hungry and/or suffers from a mental health illness, and suicide is the second-leading cause of death of young people ages 10-24.

The Illumination Foundation has cared for thousands of children. It operates three family shelters and serves 500 children at any given time.

Leon, a public-health nurse, started the Illumination Foundation in his garage 13 years ago. Now it is a $25-million nonprofit with 250 employees.

“We felt it was our responsibility to take care of these individuals that can’t take care of themselves, as health care professionals and leaders,” Leon said. “We wanted to break the cycle of homelessness. We knew there were two things that were preventing people from moving on – one was health and the other was housing.”

The foundation provides recuperative care to homeless patients, giving them a safe place to recover after hospital discharge rather than returning to the streets. Micro communities of shared housing provide specialized supportive services such as case management, counseling and medical oversight.

He encouraged the students in the audience to join in these efforts.

“Don’t underestimate the impact you have on children and the homeless. The myths that you hear about people not wanting help is not true,” Leon said. “We have thousands of people that are now in permanent supportive housing, and certainly the children need our help in all facets.”

Grover encouraged future clinicians in the audience to break away from the traditional health care model of figuring out “what’s wrong” and then “fixing” a patient.

“When we’re looking at traumatized individuals, we really need to be looking for the story,” Grover said. “Tell me what has happened to you. What has brought you to this point? Share your story with me and let me try and understand you so that I can partner with you.”

The Dr. Robert L. Austin Endowed Lectureship in Pediatric Medicine and Pediatric Health Care Policy is made possible by a generous donation from Mrs. Gloria L. Austin of La Mirada, California in memory of her husband, Robert, a pediatrician and early supporter of the University. In addition to the lecture, the endowment provides funds for annual scholarships for both an osteopathic medical student and a pharmacy student.