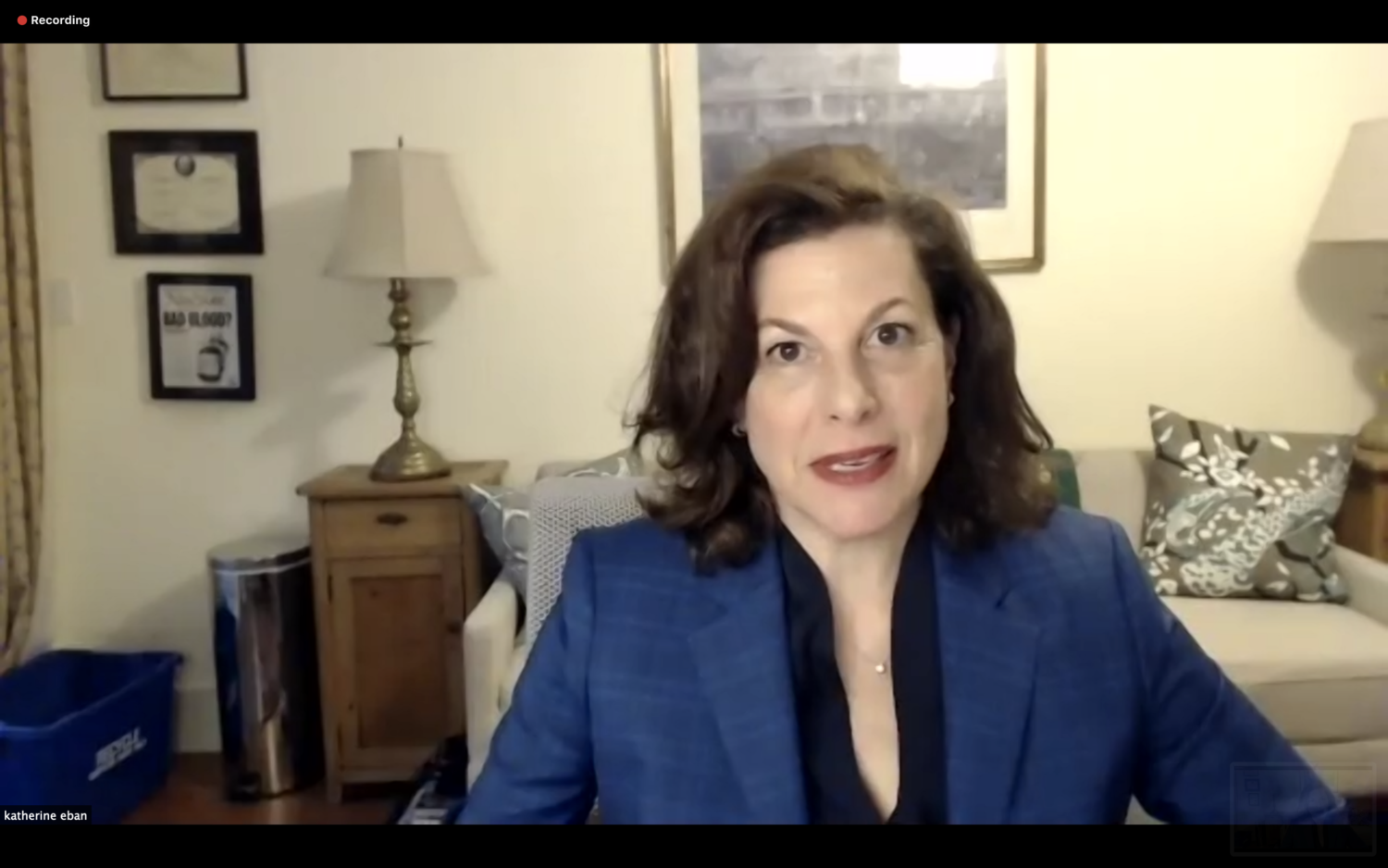 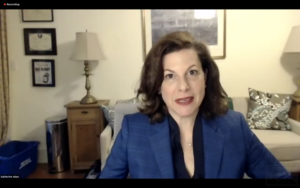 As the bulk of generic drug manufacturing moved overseas, lack of oversight and companies that placed profit over safety resulted in widespread cases of data manipulation, fraud, and dangerous conditions.

Investigative journalist Katherine Eban presented “The Hidden World Behind America’s Low-Cost Drugs” at Western University of Health Sciences’ Ray Symposium April 30, 2020. The event was held as a virtual Zoom presentation for the first time due to the COVID-19 pandemic, drawing a peak online viewership of 672.

Eban’s book, Bottle of Lies: The Inside Story of the Generic Drug Boom, represents 10 years of investigative reporting on four continents. She interviewed more than 240 people, reviewed more than 20,000 pages of internal U.S. Food and Drug Administration (FDA) documents and submitted 16 Freedom of Information Act requests.

A global supply has made drug plants harder to police, she said. Eban found major flaws in how the FDA inspected drug manufacturing plants overseas, which led to widespread fraud and dangerous conditions. The FDA would announce it was coming months in advance and ask the plants to arrange ground transportation and hotels for the inspectors. These manufacturing plants would upgrade inspectors’ hotel rooms, arrange entertainment and shopping trips and offer gold coins. The FDA investigators were the invited guests of the plant, resulting in the inspection to be nothing more than “regulatory tourism.”

“So what was happening in those plants, according to sources I began to develop, is those inspections were essentially staged and that the plants were operating data falsification teams that would arrive weeks in advance of the FDA’s visit and start altering documents,” Eban said. “They would backdate inspection records. They would invent data. They would shred incriminating documents. The system of overseas inspections was having a corrupting effect on the FDA inspector.” 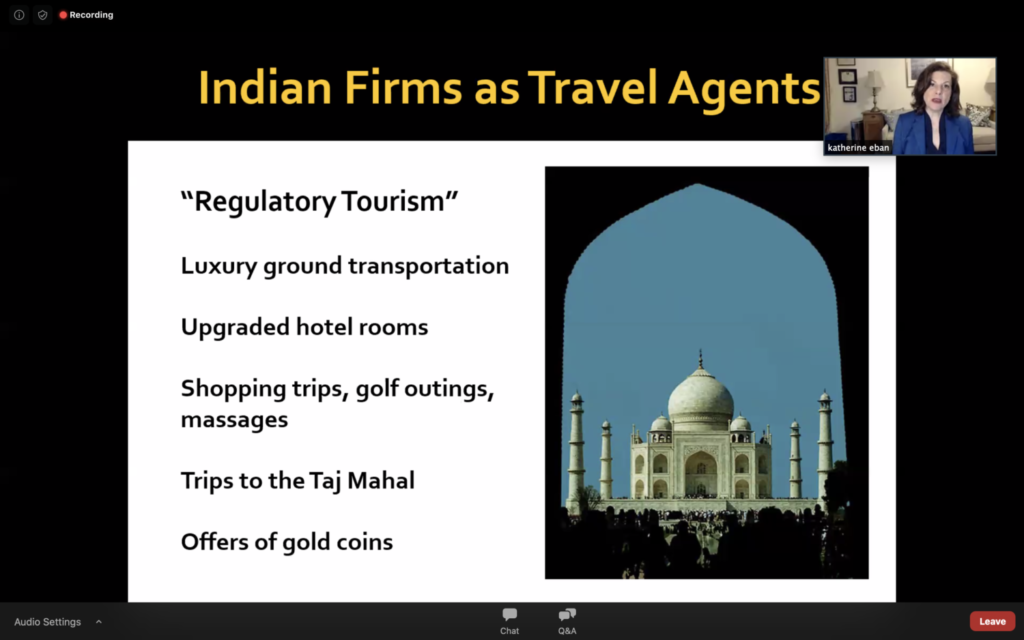 The FDA ran a pilot program from January 2014 to July 2015 under leadership of a new director of the FDA’s India office. Unannounced inspections became the norm. The FDA made all travel arrangements through the U.S. Embassy rather than being hosted by the plants.

“In that time period the FDA’s most serious findings of official action indicated…increased by almost 60 percent,” Eban said. “What this tells you is that the FDA was not previously seeing true conditions. Once they did unannounced inspections, they began to see what was really going on.”

One FDA inspection found a snake in a supposed sterile laboratory. A retiree in New Jersey found a live bug in a blood pressure medication capsule.

“We know that generic drugs with toxic impurities, unapproved ingredients, dangerous particulates like glass and metallic fragments, or that are not bioequivalent have reached American patients,” Eban said.

In 2013, a Cleveland Clinic study found heart transplant patients who responded fine to brand-name Prograf, an immunosuppressant, but had symptoms of organ rejection when switched to a particular brand of generic tacrolimus.

“This really leads me to the conclusion that even though there is such a huge demand for these low-cost drugs, I think we need to contemplate whether there is a hidden cost to these drugs,” Eban said. “You have patients with relapses, readmission, organ failure after transplants and all of that comes with a huge cost, both for the patients and financial cost as well.” 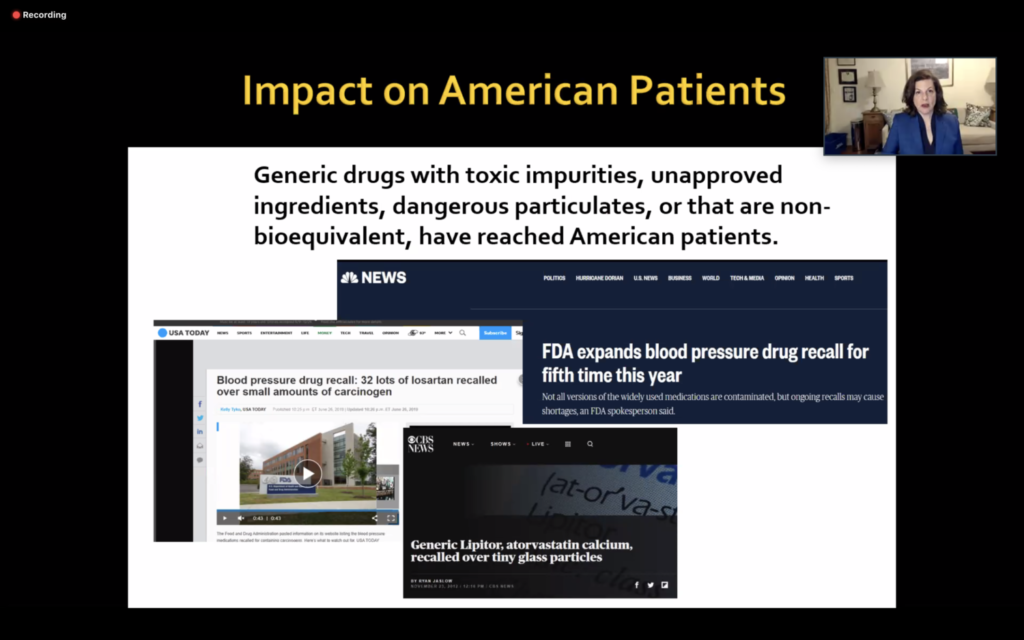 The COVID-19 pandemic has exposed the United States’ profound dependence on overseas drug manufacturers and the national security risks of that, Eban said.

“I just reported the FDA is actually approving drugs from Pakistan,” she said. “They are basically allowing drugs to come in through emergency waivers, from plants they never set foot in, from countries where they never inspected.”

Her recommendations moving forward are to make surprise inspections the world norm; to test all drugs at both the FDA and pharmacy level; establish procurement guidelines that prioritize and incentivize quality; train a global cadre of investigators to detect fraud; create a global treat to codify and enforce drug quality.

“Ultimately, which is what may be starting to happen, bring back U.S. manufacturing for critical drugs, which is so important right now when we find ourselves in this crisis,” Eban said.

The Ray Symposium is an interprofessional program presented by the WesternU College of Pharmacy. The symposium honors College of Pharmacy Dean Emeritus Max Ray, MS, PharmD, who created a stimulating educational environment that fostered excellence and professionalism while serving as a professor and dean from 1996 to 2006.

“Our 2020 Ray Symposium was a great success. Katherine Eban certainly lived up to her billing. Max Ray commented that Ms. Eban represents investigative journalism at its best. Definitely in the ‘tour de force’ category,” said College of Pharmacy Dean Daniel Robinson, PharmD, FASHP. “The subject matter couldn’t have been more timely given the demands for ‘rush-to-market’ drugs for COVID-19 and regulatory systems ill equipped to ensure public safety. Ms. Eban has alerted us all to the challenges in maintaining the quality of both our brand and generic drug supply.”