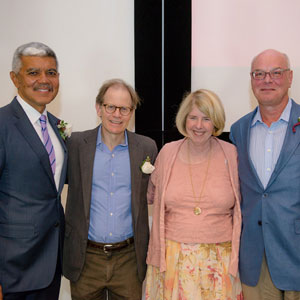 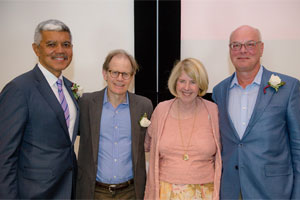 Medicine is much more than scientific knowledge and textbook definitions of disease. It’s reaching out to a patient who feels isolated. It’s developing relationships and thereby growing the mind. It’s finding solace in poetry and art amid madness.

WesternU President Daniel R. Wilson, MD, PhD, invited three renowned authors and academic leaders – and decades-long friends and colleagues – to speak at his Presidential Symposium on August 11, 2017. The symposium, “Health, Science and Humanism,” was one of the premier events leading up to Wilson’s inauguration on August 12.

Kay Redfield Jamison, PhD, talked about “Healing the Mind” by examining the life and art of Pulitzer Prize-winning poet Robert Lowell. Jamison is a leading expert on manic-depressive (bipolar) illness. She is the Dalio Family Professor in Mood Disorders, Professor of Psychiatry at the Johns Hopkins University School of Medicine, and co-director of the Johns Hopkins Mood Disorders Center. Her book Robert Lowell: Setting the River on Fire was published by Knopf earlier this year.

Lowell had great character and courage, but also had a severe form of what we now call biopolar illness, Jamison said. Psychotherapy and medication can help many, but not all.

“For Robert Lowell, his relentless psychotic attacks of mania ripped his life apart and ripped apart the lives of everyone he knew,” Jamison said. “Psychotherapy helped, he said, and lithium was essential. But only writing healed. Writing, he told a friend, takes the ache away. So I wanted to talk a little about what patients can do, but also what doctors can encourage patients to do.”

Lowell, in a letter to Frank Bidard, wrote, “How often writing takes the ache away, takes time away. You start in the morning, and you look up to see the windows darkening … I think the ambition of art, the feeding of one’s soul, memory, mind, etc. gives a mixture of glory and exhaustion.”

Lowell’s psychiatrist encouraged him to write autobiographically. Lowell wrote, “I am writing my autobiography literally to pass the time. I almost doubt if the time would pass otherwise. However, I also hope the result will supply me with swaddling clothes, with a sort of immense bandage of grace and ambergris for my hurt nerves.”

Lowell was hospitalized 20 times for acute psychotic mania before he was put on lithium. It kept coming back, and he knew he had no control over it, Jamison said. Lowell found solace in writing, which serves as a valuable lesson to encourage others to get back to whatever it is they love.

“Writing has the capacity to allow you to dip in to memory and to nightmare and to experience at a rather more controlled rate than you would otherwise be able to do, so it doesn’t just overwhelm you,” Jamison said. “You could control the experience by writing about it. And it also keeps depression at bay. It doesn’t keep you from getting depressed but you keep it a little bit more at a distance. It structures disorder. It gives meaning and it resurrects. It allows you to come back into life again.”

Wayne State University President M. Roy Wilson, MD, MS, also turned to literature in his talk, “Humanism: Personal and Institutional Reflections.” He referenced Franz Kafka’s The Metamorphosis, in which a man named Gregor Samsa wakes up to find himself transformed into a large insect. He compared the character’s plight with that of patients dealing with terminal illnesses.

“It’s one of the best examples of alienation made symbolic in literature,” Wilson said. “Like Gregor, who suffered doubly by the attitude of his supposed loved ones who made clear they would be better off without him, many suffer in isolation. As health care professionals, we can do better in caring for those who need us the most.”

Medical education requires a scientific foundation and a social and behavioral foundation. Humanism in medicine mandates the inclusion of the arts and humanities as a critical third foundation, Wilson said. He thanked WesternU’s Wilson for inviting him to speak at the symposium, which prompted him to think deeply about humanism.

“Giving considerable thought to this topic and reading a lot over the past several weeks provided me an opportunity to revisit why I became a physician and what I hoped to accomplish by becoming a physician,” M. Roy Wilson said. “I also realized that some of the same characteristics that define humanism in medicine are operational in educating young students as they evolve and sometimes even transform into the next stage of their lives. And I believe I can better serve our students and be a better university president by always valuing the basic tenets of humanism.”

UCLA School of Medicine Clinical Professor of Psychiatry and Founding Co-director of the Mindful Awareness Research Center Dan Siegel, MD, examined how mindful awareness – paying attention to present moment experiences with openness, curiosity and a willingness to be with what is — can improve connections between the mind, the body and relationships.

In mathematics, complex systems have three characteristics: they are nonlinear, chaotic and open. A complex system has something called emergent properties, where the interaction of the elements gives rise to something that cannot be reduced to its elements. When a complex system is optimally self-organizing, it goes in one pathway. When you block that optimal self-organization, it goes either to chaos or rigidity.

The mind is an emergent, self-organizing, embodied and relational process that regulates energy and information flow. People with serious trauma can have intrusions of chaotic memories and feelings in their body or they can be shut down and socially isolated in rigidity.

Secure attachment, which has been associated with optimal well-being, is an integrated relationship. Parents honor differences and promote linkages with their children.

“You increase the growth of an area called the insula, which we’ve shown at UCLA is the pathway toward not only insight but empathy and compassionate action,” Siegel said. “So if we could train young clinicians to be more empathic, you would be teaching them these mindfulness techniques.

“When we think about humanism in medicine, it means bringing the mind into medicine so that you could see how relationships between the clinician and the patient can be optimally integrated,” Siegel said. “When we talk about healing the mind, I think what we’re doing is having the mind go from states of chaos or rigidity and toward harmony, because healing is making whole and making whole comes from integration.”