WesternU technology leader named finalist for CIO of the Year

WesternU technology leader named finalist for CIO of the Year

Cornish is one of five Nonprofit/Public Sector Finalists. The winners of the SoCal CIO of the Year ORBIE Awards will be announced Nov. 12, 2021. 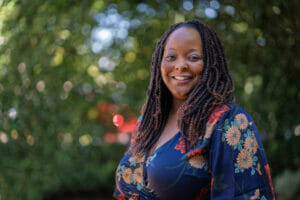 WesternU Associate Vice President of IT & Deputy COO Denise (NeeCee) Cornish was selected as one of this year’s five Nonprofit/Public Sector finalists for the SoCal CIO of the Year ORBIE Award. (Jeff Malet, WesternU)

Cornish said her nomination was unexpected and humbling. She is grateful for the support from her mentor, WesternU Senior Vice President and Chief Operating Officer Clive Houston-Brown, EdD, and other senior leaders at the University.

“They have all reached out to me on various occasions when I first moved into this role to provide their support and guidance,” Cornish said. “To me, that’s the true definition of our mission of being humanistic. I have a lot of people in my corner here. I feel very grateful and very blessed.”

Cornish has worked at WesternU for 20 years, starting as an Oracle database programmer developing customized databases for finance and human resources. She took on more responsibilities and was promoted to project manager, then Director of Information Systems, and then Senior Director of Enterprise Applications and Databases. She was promoted to her current position in July 2020. WesternU’s Information Technology department has about 55 employees overseeing about 500 applications.

Cornish is one of those unique IT leaders who has the ability to effectively bridge the IT and business/academic worlds, Houston-Brown said. She has a deep knowledge of technology, a clear understanding of how it can be used to support, enhance, and advance the core functions of the University, and the ability to communicate effectively with both technical and non-technical audiences. She also has solid interpersonal relationship skills that foster a strong sense of community with everyone she deals with.

“Her leadership of IT personnel has resulted in increased morale and job satisfaction and her leadership of IT initiatives have helped advance the mission of the institution,” Houston-Brown said. “Her breadth and depth of technology and institutional knowledge, combined with the high level of trust and confidence she has built up with campus leadership, made her a natural to lead the IT department and take on a broader role within the Operations Division.”

Cornish said her leadership style has evolved through the years. She used to think she needed to be the one with all the answers, but she discovered that would instead just discourage others from offering their own solutions.