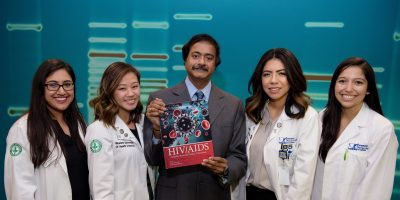 They gathered around the book excitedly, flipping through the pages until, on page 135, the result of a year of late-night revisions and lab work paid dividends: their names in print as authors of a textbook chapter on HIV/AIDS.

Parveen Hussain and Alexis Alejandre were Master of Science in Medical Sciences students in the Graduate College of Biomedical Sciences (GCBS) when they worked on their chapter during the 2015-16 academic year. Leslie Gonzalez and Judy Ly were students in GCBS’s Master of Science in Biomedical Sciences program. All four are now second-year COMP students. They expressed interest in becoming DOs, and Venketaraman encouraged them to publish in order to help them attain their goals. 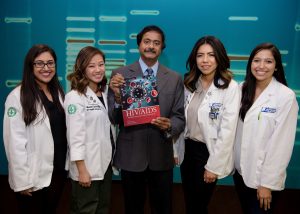 “I thought it would be nice to involve them for the simple reason that if the publication comes out, it’s going to benefit them in terms of getting into residency programs,” Venketaraman said. “Having a research publication is looked at with great respect by the program directors of residency programs.”

The team created a Google doc that everyone contributed to. They would message each other and ask for others to read over their work.

“We would keep giving each other deadlines,” Ly said. “We just kept reading it over and over again, working with everyone’s schedule.”

“It really taught us how to work effectively in a team and to have critical thinking skills,” Hussain said. “People have different styles of approaching the topic, so ensuring that we are presenting this one cohesive message is something that can be challenging. I’m happy to see it turned out well, but it was a lot of hard work.”

The students said they were inspired by Venketaraman’s dedication to his research, and said his mentorship went beyond helping with the book chapter.

“He told us, ‘If in the middle of the night you have questions, call me. If you have issues, call me. If you’re feeling anxiety and you feel like you’re going to break down and cry right now, call me,’” Ly said.

And his support continues to this day. “One weekend before every exam, he wishes us the best of luck,” Ly said.

The book chapters are based on research Venketaraman’s lab has been working on for decades.

“Our previous research publications have been recognized and the scientific community has been getting in touch with us either to contribute a research article, a review article or a book chapter,” Venketaraman said. “It is exciting to be part of this big project that involved world-renowned researchers. I feel very humbled about it.”