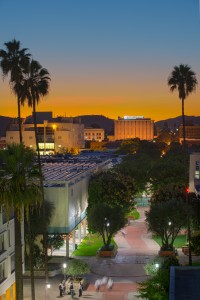 The sun sets at WesternU, showing the Esplanada and the Anderson Tower with newly lighted signs. (Jeff Malet, WesternU)

Western University of Health Sciences placed two highly visible signs on the roof of the Anderson Tower on the southwest corner of Garey Avenue and Second Street in downtown Pomona this week. The first sign was placed on the east side of the building’s roof Monday, Oct. 27, 2014 and the second sign was placed on the south side of the building’s roof Thursday, Oct. 30.

WesternU acquired the 70,000-square-foot, seven-story Chase Bank building in 2013 primarily for office space and named it the Anderson Tower, in honor of Don A. Anderson, DO, an alumnus of WesternU’s College of Osteopathic Medicine of the Pacific (COMP), who died in 2011. A $4.2 million gift to WesternU from Dr. Anderson’s estate was used to purchase the Chase building.