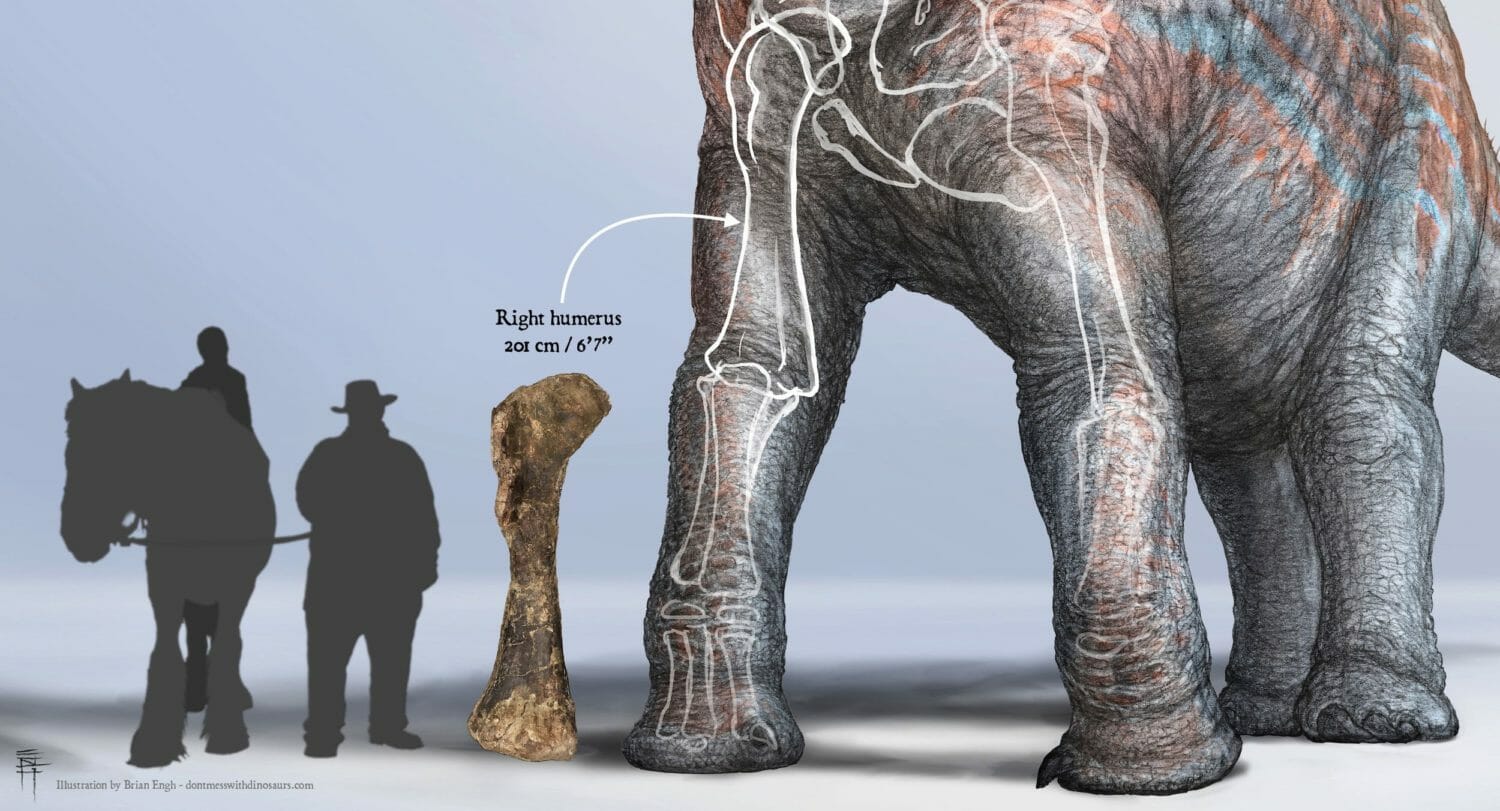 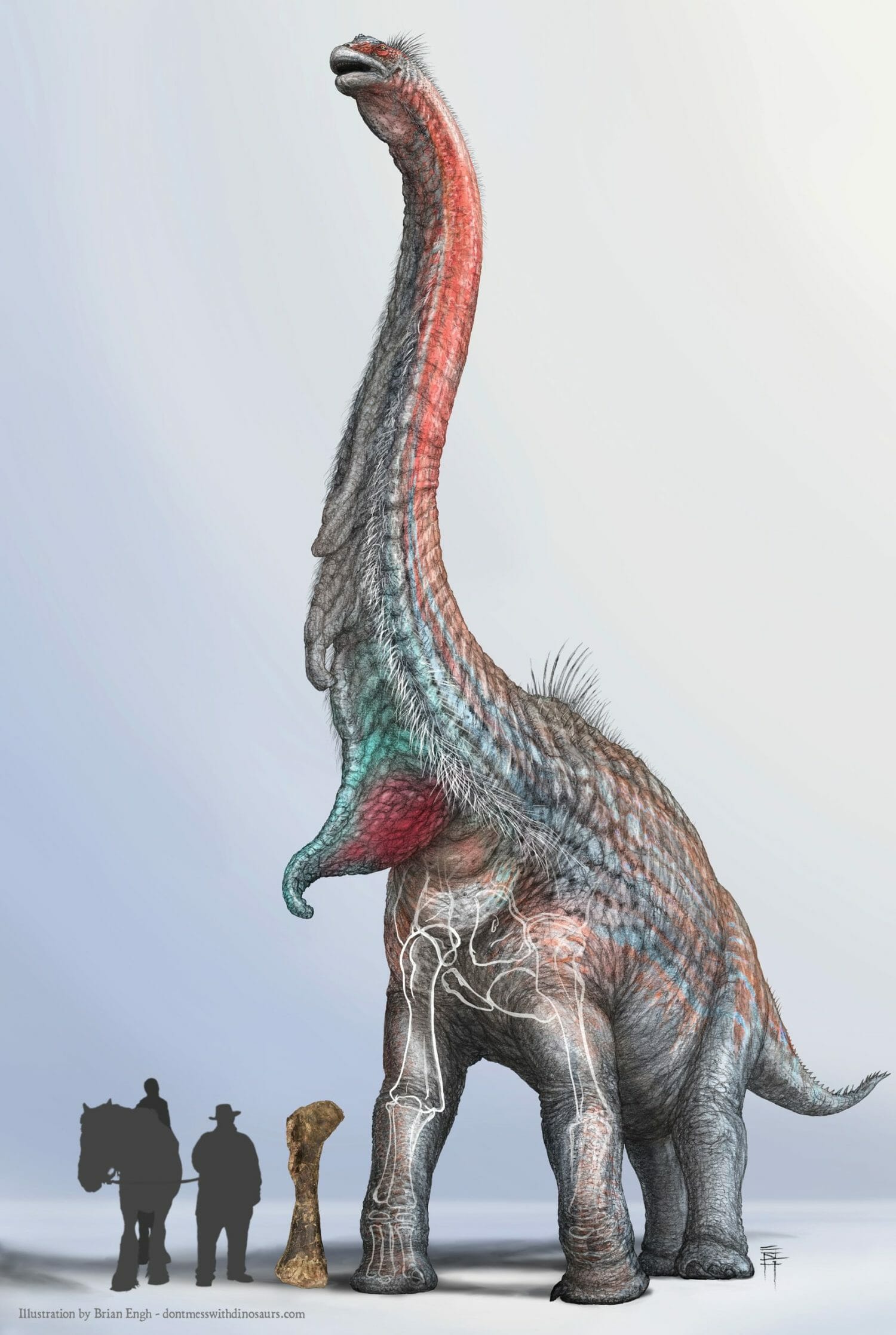 A team of paleontologists from Western University of Health Sciences in Pomona, California, and the Utah Field House of Natural History State Park Museum in Vernal, Utah, has recovered a 6-foot, 7-inch humerus (upper arm bone) belonging to the rare, 30-plus-ton dinosaur Brachiosaurus from the desert of southern Utah.

The giraffe-like Brachiosaurus is distinguished by its long front legs, deep chest, and long neck. This is only the third humerus of a Brachiosaurus ever found – and the first in Utah. The bone and its surrounding rock, enclosing plaster and burlap “field jacket” weighed more than 1,000 pounds and were removed with the assistance of two Clydesdale horses.

The humerus will make its first public appearance at an unveiling in the lobby of the Utah Field House of Natural History State Park Museum, 496 East Main St., Vernal, Utah, at 11 a.m. Thursday, Jan. 30, 2020. The discovery is also the subject of a documentary, Jurassic Reimagined, created by Brian Engh. Part 1 is available to view below or visit his YouTube channel, Brian Engh Paleoart: https://www.youtube.com/user/DinosaursReanimated/videos.

The site was found in May 2019 by Engh, a paleoartist. The humerus was removed in October after permits were cleared and after securing the assistance of a horse team. After the bone was covered in plaster and burlap to immobilize it within sand, soil, and mudstone, it was dragged to a utility wagon that hauled it out of the remote site across rugged terrain by the horse team of Darla and Molly the Clydesdales, led by Wes and Resha Bartlett of Naples, Utah.

Despite being one of the most famous dinosaurs from the Late Jurassic-age Morrison Formation of the western United States, Brachiosaurus is a particularly rare dinosaur, outnumbered by an up to 20-to-1 ration by specimens of other species of dinosaurs. Team member John Foster of the Utah Field House of Natural History, a veteran of 29 seasons working in the Morrison Formation, said, “This is the first time I’ve even seen a Brachiosaurus in the field. Collecting one is a rare treat!” 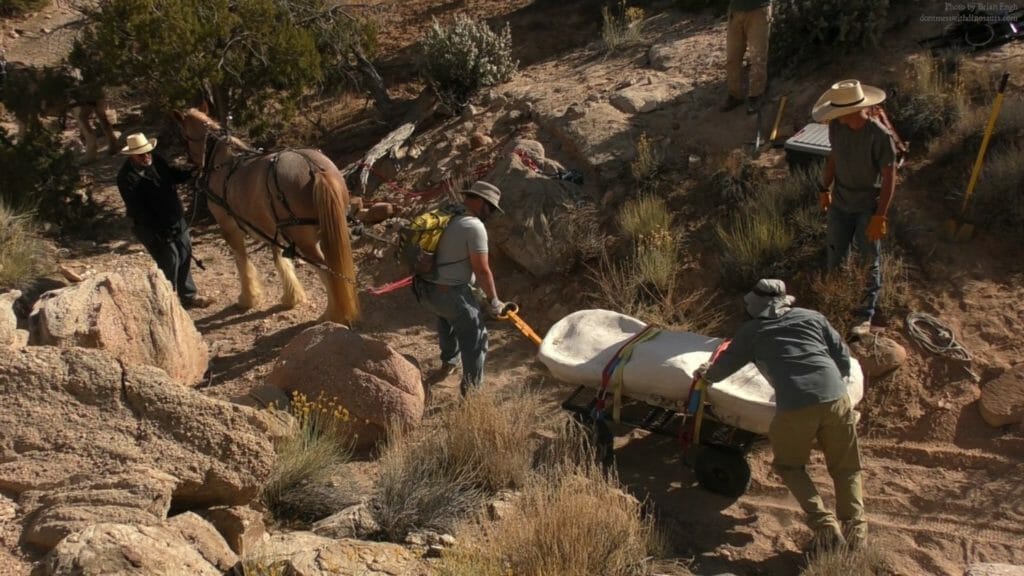 WesternU anatomist Mathew Wedel, PhD, and his collaborators hauled the Brachiosaurus humerus from its excavation site with the help of Clydesdales. Photo by Brian Engh, dontmesswithdinosaurs.com.

WesternU College of Osteopathic Medicine of the Pacific and College of Podiatric Medicine Associate Professor Mathew Wedel, PhD, assisted with the discovery and excavation of the giant bones. Wedel has loved dinosaurs since he was 3 years old, and started working with dinosaur fossils in 1996. The team first visited this site in 2014, and after five years of work found not only the humerus but also several fossil plants in the surrounding area, which will tell them more about the Brachiosaurus’ environment.

“We are excited about the progress we’ve made so far, and we’re excited to now have a place to go back to where hopefully more big bones are waiting for us,” Wedel said. “The plants are almost as exciting to me as the brachiosaur because we’re not just headhunting. We’re not stamp collecting. We want to understand the world these animals lived in. We’re trying to be biologists of the past.”

The Brachiosaurus humerus found in the Utah desert. Photo by Brian Engh, dontmesswithdinosaurs.com.

The large bone is being prepared in the paleontology lab at the Utah Field House of Natural History State Park Museum in Vernal, Utah, and will be visible to the public during this process.

The project was funded by the Friends of the Utah Field House, Western University of Health Sciences, and Engh/dontmesswithdinosaurs.com. Permitting partners included the Utah Geological Survey, Natural History Museum of Utah, and Bureau of Land Management.