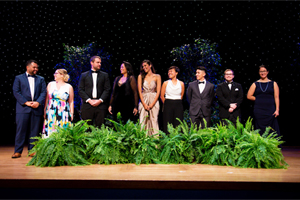 Western University of Health Sciences’ biggest annual fundraising event honored one of its founders and shone a spotlight on its stars – the students who will become compassionate health care professionals.

More than 600 guests at “A Tribute to Caring,” held Nov. 3, 2018 at the Disneyland Hotel in Anaheim, California, helped WesternU raise money for student scholarships. The University honored osteopathic pioneer and one of its founders, Ethan Allen, DO, as well as entrepreneur Leo Chu.

“These initiatives, and the bright future they reflect, are made possible because of the support and friendship WesternU has enjoyed from all of you and others who share in our mission, vision and values,” said WesternU President Daniel R. Wilson, MD, PhD. “Our festivities tonight acknowledge the outstanding work being done by our amazing students, faculty and staff. They are also a vivid demonstration of support for them.

“But we are here also to celebrate you,” he added. “By supporting A Tribute to Caring and WesternU as a whole, you help ensure our University continues to produce highly skilled healers, biomedical researchers, and community servants, all in a tradition of compassion and care and our ethos of humanistic science. Your support helps light the way for generations of caregivers – and care – to come. For this we thank you profusely.”

International entrepreneur and philanthropist Leo Chu received WesternU’s Global Health Education Ambassador Award. Chu was born in Shanghai and raised in Hong Kong. His father received only a fourth-grade education and could not communicate with foreign customers at his textile business because he did not speak English. He implored his son to get a good education and learn English. Chu did both, immigrated to the U.S. in 1975 and started a successful clothing company, and then went into the casino business, becoming the first Asian American to own casinos in California.

Chu has served as a board member of the Special Olympics for 24 years, and is chairman of the Morning Light Foundation, which builds schools in poor and remote areas of China and provides 400 scholarships every year. Education and health care are most important in life, he said. Health care improves people’s lives and the U.S. attracts the best people in the world with education.

“Eighty to 90 percent of them stay here and become American citizens. Immigrants make this country, still today,” Chu said. “We make the world a better place to live by educating other people, not just ourselves.”

Chu said he met WesternU Founding President Philip Pumerantz in the 1990s, and he re-established his connection to WesternU by meeting with Dr. Wilson and touring the campus recently.

“We look forward to deepening our relationship with you in the future,” said WesternU Vice President for University Advancement Diane M. Abraham, PhD, CFRE.

“Without the finances, no matter how smart you are, you can’t accomplish what you want to accomplish,” said Palmer, who is in the Master of Science in Health Sciences program. “I couldn’t have done it without financial help from others. Every generation is changed (by scholarships). Now my children go to college because people helped me be the first person to go to college.”

College of Optometry student Joshua Dalley said he felt blessed to be able to receive scholarships and to be part of the event.

WesternU honored osteopathic pioneer Ethan R. Allen, DO, with the Lifetime Achievement Award. Allen was a pivotal advocate for doctors of osteopathic medicine (DOs) maintaining their degrees and licenses in California when some chose to convert to MDs in the 1960s. He was a major force in the creation of the College of Osteopathic Medicine of the Pacific, which helped re-establish osteopathic medical education in California, and has served on the COMP (now WesternU) Board of Trustees since its inception in 1977. He retired from practice after 65 years and continues to teach COMP students Osteopathic Manipulative Medicine (OMM) techniques during his volunteer Saturday sessions.

WesternU Board of Trustees Treasurer Ethan R. Allen, DO, is honored with Lifetime Achievement Award during WesternU’s 38th annual “A Tribute to Caring” gala Saturday, November 3, 2018 at the Disneyland Hotel. #ATributetoCaring #WesternUWay

Allen graduated from the University of Wyoming in 1943 with an electrical engineering degree and made electric motors for the B-29 airplane for General Electric. He was recruited, along with 30 other young engineers, for the Manhattan Project to develop the atomic bomb. He was drafted into the military in 1944 and trained in the Navy in San Diego and Corpus Christi, Texas. He served in the Navy Air Corps as a radio and radar technician.

He was discharged in 1946 and obtained his DO degree in 1951 from the College of Osteopathic Physicians and Surgeons in Los Angeles.

His career change from engineer to osteopathic physician took place because of a “happenance,” which Allen explained is a conversation, a book, or an event that changes the course of your life.

He was talking with another engineer about the book “The Phenomena of Life: A Radio-Electric Interpretation” by George Crile. His colleague said, “Well, if you’re thinking about your electrical engineering being able to help people, maybe you ought to become a doctor.”

That book and that conversation changed the course of Allen’s life, and as a result, affected all who graduated from and work for WesternU.

“So I hope sometime you may look back on your lives, each and every one of you, and think about what happened, by someone, or some event that changed the course of where you were going and have a happenance,” Allen said. “And I hope even this evening with all of the students and their activities and their participation and their visible presentations, that all of you have a happenance tonight.”