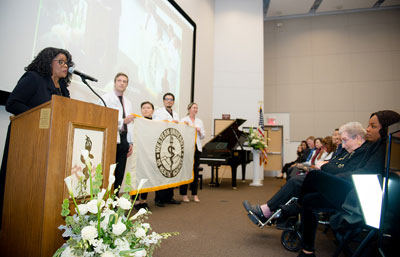 In bringing to life his “impossible dream,” Western University of Health Sciences Founding President Philip Pumerantz, PhD, impacted the lives of thousands in his university family and touched millions through the healers he helped train.

WesternU faculty, staff and students joined community leaders and family February 28, 2018 at a Celebration of Life for Dr. Pumerantz, who passed away Dec. 26, 2017. Through inspirational words and personal stories that brought laughter and tears, they testified to Dr. Pumerantz’s humanism, vision, and the importance of family – both the support he received from his own family and the WesternU family he created.

Dr. Pumerantz founded the College of Osteopathic Medicine of the Pacific (COMP) in downtown Pomona in September 1977. COMP became Western University of Health Sciences in 1996 and was joined by eight additional colleges, as well as a campus in Lebanon, Oregon. Dr. Pumerantz retired in September 2015 and took on the role of President Emeritus.

WesternU President Daniel R. Wilson, MD, PhD, said succeeding Dr. Pumerantz was akin to taking over the Globe Theatre after Shakespeare’s departure. Dr. Pumerantz was a remarkable man who had an indomitable quality but was also very sweet, Wilson said. He was a man of ready action, but also had a big heart.

“I hope we can achieve half or even a tenth of what he has achieved,” Wilson said. “And I use the present tense because although he is gone from us, his achievements live and thrive and will have a very bright future.

“All the remarkable good that he achieved will live after him and shine brightly,” Wilson added. “Phil, WesternU celebrates you and your remarkable life even as you look down on us with a cute grin and eyes a-twinkle, and I really want to thank you for building this wonderful institution.”

Osteopathic leaders Ethan Allen, DO, and Donald Dilworth, DO traveled to Chicago to recruit Dr. Pumerantz to lead COMP. They gifted him a brightly colored “California” tie as an enticement to take on this unique challenge. His son, Richard Pumerantz, PhD, who served as master of ceremonies, wore the tie to the Celebration of Life.

“As an emblem of his commitment, he continued to wear it. He wore it at many events and religiously wore this tie to every Commencement ceremony in particular because of its importance,” Pumerantz said. “It was only appropriate today that I wear it so that everyone have an opportunity to see his commitment, even to the end, and his belief in the family of WesternU.”

COMP Dean Paula Crone, DO ’92, said she remembered how much pleasure and pride Dr. Pumerantz took in handing out diplomas to WesternU graduates at Commencement. WesternU has graduated more than 14,000 health professionals.

“He truly loved his students and he loved his graduates,” Crone said. “He loved the fact that he got to stand up there on that stage with his deans and see the future of health care walk before him and know that he helped to create it and helped to shape it.

“His impact will always be felt by every patient treated by a WesternU graduate and by every subsequent trainee who goes on to train others,” she added. “Multiply 14,000 by all the patients our WesternU graduates see. You can appreciate the multiple millions of lives that this one man’s legacy already represents. These are lives changed, lives impacted, lives saved. A very proud legacy indeed.”

Dr. Pumerantz established WesternU with humanism as its core principle. College of Pharmacy Associate Professor and alumnus Micah Hata, PharmD ’07, said he first defined humanism as treating patients as a human being with feelings and emotions rather than as a medical condition or a problem to solve. But spending time with Dr. Pumerantz taught him that humanism means much more.

“It meant developing relationships with the people around you. It was not only seeing someone as an individual human being, but inviting them to be part of your community,” Hata said. “And he didn’t just preach this philosophy, he lived it.

Dr. Pumerantz was excited to learn Hata and his wife were having triplets, and after their birth he always asked how they were doing, Hata said.

“Dr. P, I know my story is one of many and I appreciate the opportunity you have given me as one of your students and one of your faculty. But what I appreciate most is you didn’t see me as just another student, or just another alumnus or just another faculty member or even just another employee,” Hata said. “You took a sincere interest in me as a person and made me feel like a part of your and Mrs. P’s community. And that to me is being humanistic. And it’s how I try to interact with my patients each and every day. So rest assured that your legacy lives on. And it is something I will try to teach my students and to my kids. Thank you, Dr. P, and wherever you may be, whatever adventure you’re tackling next, Godspeed my friend.”

Dr, Pumerantz served as a mentor, friend and partner to many community leaders in Pomona and beyond. University of La Verne President Devorah A. Lieberman, PhD, said Dr. Pumerantz invited her to his office soon after she became president in 2011.

“He talked to me about what does it mean to be a university president. What does it mean to always focus on the mission of your institution and on the students of your institution,” Lieberman said. “And he began that day to talk to me as a friend, a mentor, a colleague and a peer. I’ll never forget that, because his reaching out made me feel welcome in this community and showed me that I had someone to whom I could turn when I had difficult situations. And someone who would be honest with me, tough with me but always support me.

Dr. Pumerantz was told after completing his Army service that he was not smart enough for college. But his mother encouraged him to become the first in his family to graduate from college, Richard Pumerantz said.

“So he went to college and he listened to this song as inspiration that he could dream these impossible dreams,” Pumerantz said. “A man who was told it couldn’t be done, we are now honoring today.”

WesternU Deputy Chief Operating Officer and College of Allied Health Professions Dean Stephanie Bowlin, EdD, PA, said Dr. Pumerantz encouraged her and many others to dream big, be visionaries and to look far into the future without any limits. She and many others praised the true partnership between Dr. Pumerantz and his wife, Harriet.

“Their devotion to one another, to family, to community and the work they shared created the foundation from which WesternU has grown and will continue to grow for generations to come,” Bowlin said. “Their legacy of humanism, excellence, and health care will endure through every faculty, administrator, staff, student and alum. At this time, we tend to be sad at the loss of a great man. But as friends of Dr. P and Harriet, we honor him most by choosing instead to be happy for having known him. We are blessed with the opportunity to continue to realize his vision for WesternU and forever be grateful to have been a part of his legacy.”

The “Pumerantz Partnership” between Dr. and Mrs. Pumerantz brought WesternU to where it is today, said WesternU Vice President for Enrollment Management and University Student Affairs Beverly A. Guidry, EdD, who then addressed Harriet directly.

“So much of who we are as a university was forged in COMP’s earliest days, when you worked side by side with Dr. Pumerantz to ensure that the college would succeed for years to come. And that it would always be a warm, welcoming, sophisticated, sublime environment for every person who joined the university family,” Guidry said.

She presented a WesternU flag, one of the first created after COMP became WesternU, to Harriet Pumerantz.

“I am honored to present this flag to you, Mrs. Pumerantz, on behalf of a grateful university community and on behalf of all those blessed by the compassion, expertise and human touch of a Western University of Health Sciences healer,” Guidry said. “Your shared vision, your shared determination, your endless hours of sacrifice and work, your high standards, all are the foundational fabric of this university, as essential to what we are today as gold and brown thread are to this flag. We are here now because you were there then, and we thank you and we love you.”

Richard Pumerantz closed by saying that he always encouraged his father to write down the story of WesternU so future generations could learn from it.