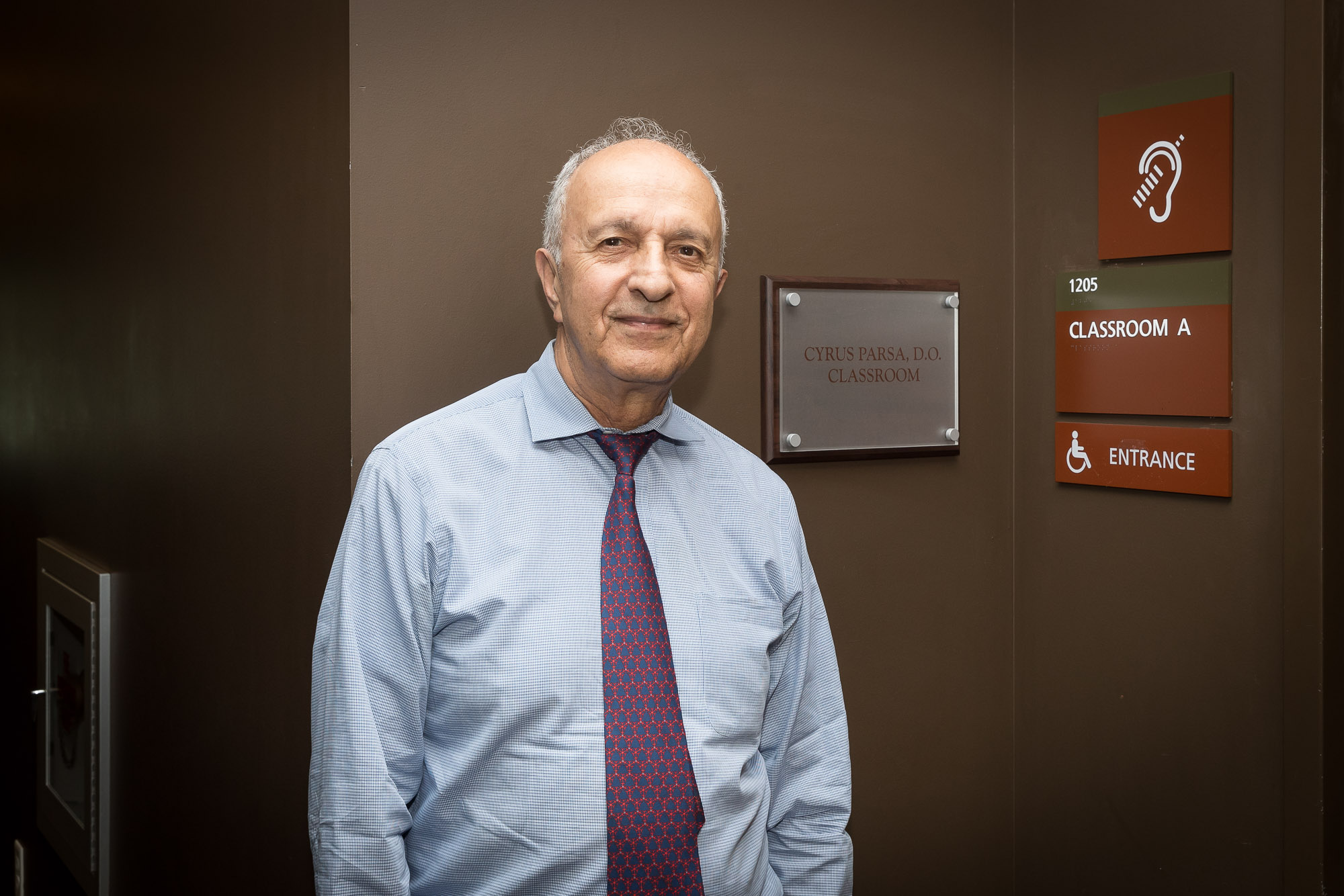 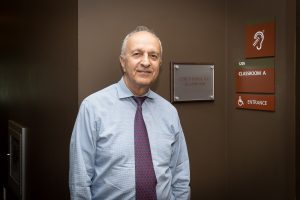 COMP Chair and Professor of Pathology Cyrus Parsa, DO, stands outside of the classroom dedicated in his honor. (Mirza Hasanefendic, WesternU)

Western University of Health Sciences honored an inspirational teacher and mentor by dedicating a classroom in his honor.

WesternU dedicated Classroom A of the Health Education Center to Cyrus Parsa, DO, Chair and Professor of Pathology at the College of Osteopathic Medicine of the Pacific (COMP), at a ceremony May 5, 2017.

Parsa has inspired students to believe in themselves and to follow their passion, said COMP Dean Paula Crone, DO.

“He’s helped support their dreams so that their dreams could become a reality, and he does it in such a way that they walk away feeling empowered, cared for, loved and feeling part of our WesternU and COMP family,” she said.

Parsa also served as a special friend and mentor to Crone, she said, helping her first when she was a COMP student and now as dean.

“He would very quietly and gently come into my office and sit down and have a conversation, providing support, guidance and mentorship,” Crone said. “He does nothing but allow us to learn and grow and be the best that we can be.”

Parsa is board certified in Anatomic and Clinical Pathology and in Surgical Pathology and Laboratory Medicine. He also chairs the Continuing Medical Education Committee and practices pathology at Beverly Hospital in Montebello.

Every institution has a few truly special people who propel things forward in the right direction, and Parsa is one of those people at WesternU, said WesternU President Daniel R. Wilson, MD, PhD.

“Although the signs outside the doors are discrete and elegant and modest, it reflects a standard of education you helped establish, and the bar is set quite high,” Wilson said.

He inspires his students to think about evidence-based medicine.

“He teaches the students to be enthusiastic about medicine and lifelong learning, and more than anything, to develop those skills of humanistic attention to his fellow man and women’s needs with great equality,” Orlando said.

Parsa’s daughter, Ronna Parsa, DO, graduated from COMP in 2011. She said her father has been one of her greatest inspirations and taught her to value all life. He is proud to be a DO and holds his profession dear to his heart.

“He’s so dedicated to giving his students the best possible education, from the years he spent organizing and carrying around these heavy cylinders of printed out slides to learning how to animate PowerPoint presentations,” Ronna said. “He loves continually improving his lectures and making them more interesting to facilitate the understanding of clinical and surgical pathology.”

Going to medical school with her father as her teacher was one of the most valuable assets she could have asked for, Ronna said. To this day, she frequently asks him for advice when working on research projects or manuscripts. 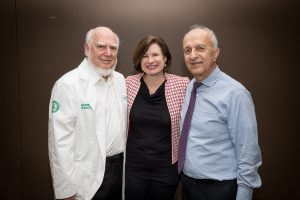 “Thank you, Dad, for everything you have taught me about the art of medicine and of life, and making me the best physician and person I can be,” she said. “I would be honored to continue such an amazing legacy as the one you’ve created here at WesternU.”

Parsa, who walked into the classroom to a standing ovation, said he doesn’t deserve this honor “because I got more out of this than the students did.” He also joked that this type of appreciation is usually spoken at a person’s funeral.

“But when you’ve passed on, its OK, you’re gone, but now that they’ve said this, what am I going to do?” Parsa said. “I’m grateful for this honor and I hope I’m able to live up to it.”

“We look forward to many, many, many more years of service, dedication, and most importantly, teaching your students,” Crone said.