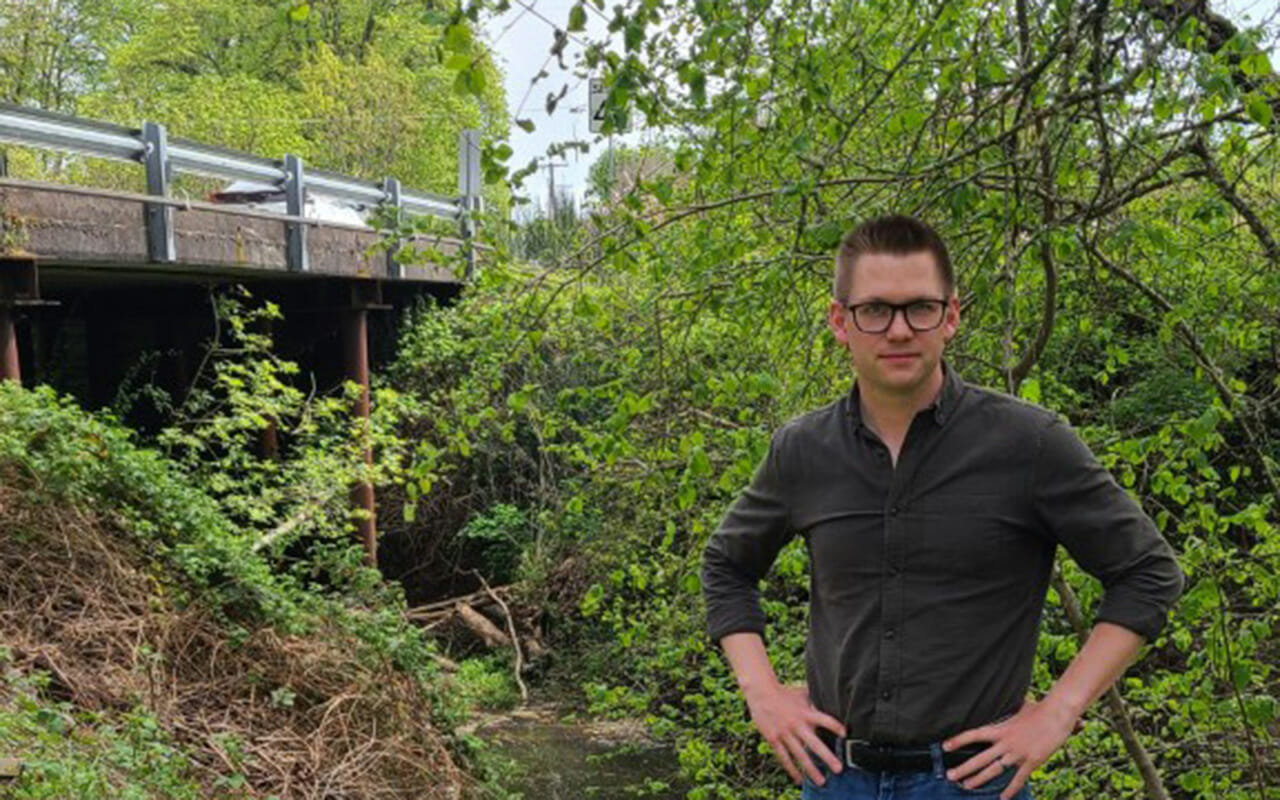 Jacob Fletcher – who will graduate from Western University of Health Sciences College of Osteopathic Medicine of the Pacific-Northwest (COMP-Northwest) on May 21, 2021 – is being called a hero after he helped rescue two injured people from an overturned car that crashed into a creek near his house in Lebanon, Oregon. 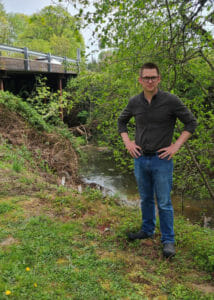 Jacob Fletcher at the crash site on his property in Lebanon, Oregon.

Fletcher, who is also a second lieutenant in the U.S. Army, said that he and his wife were sitting in their living room watching TV on Monday, April 19, 2021 when they heard a noise in the background. They looked out one of the windows of their house on 6.4-acres of land toward the creek that runs through their property and saw smoke.

“It’s kind of a drop-down, so I couldn’t really see down into it, so I threw on some shoes, ran outside, looked down, saw a car upside down in the creek,” Fletcher said. “I ran (back to the house) and grabbed a little hand sledgehammer because I figured I would need to smash a window or something.”

By the time he got back to the car with the sledgehammer, a handful of people were there trying to bring the car upright. Fletcher jumped in to help.

“When we flipped the car over, the passenger door came open and a girl popped out and she was conscious, terrified and crying,” he said. “I could see the driver through the driver’s side window had been smashed. I could see his gray tongue sticking out. He wasn’t breathing, He looked pretty bad, so I went over to him.”

Fletcher used the sledgehammer to smash out more of the windshield so he could reach in and feel for a pulse. He noticed he was alive and gave him rescue breaths and sternal rubs to wake him up. The driver eventually started coughing and breathing. Fletcher asked him his name several times and eventually, he was able to say his name.

Fletcher said that the guy’s legs were pinned by the car roof which made it difficult to get him out.  A short time later the EMTs showed up and traversed the slope to get him out.

“I went over and started treating the girl who was cut up pretty bad on her legs,” Fletcher said. “My wife had brought out the first aid kits and I started to bandage her up. She was in shock, so we got some blankets. EMS eventually got the guy out, got him on a backboard, and safely out. Then they actually gave me the backboard to put the girl on.”

Fletcher was able to get the girl on the backboard, place her in a cervical collar, and quickly checked her out for any internal bleeding and broken bones.

The EMTs took them to the hospital.

“I do believe that if it had not been for the outstanding performance from the civilians on scene that the outcome would have had a dramatically different ending,” said John Tacy, Lebanon Fire District Division Chief of Operations. “It is the outstanding performance of the citizens involved in this dramatic rescue that make the community of Lebanon one of the greatest places on earth to live.”

Fletcher says the 20-year-old male driver stopped by his house the following day to thank him. Both he and the 18-year-old female passenger are out of the hospital doing well.

“Going through medical school at COMP-Northwest helped me during this situation as I was able to keep a level head in an emergency,” He said. “It allowed me to have a stepwise process approaching a crisis.”

Fletcher says his military background played a role in maintaining calm during this emergency.

He’s on an Army medicine scholarship through the Health Professions Scholarship Program (HPSP) attending COMP-Northwest. He matched into an OB-GYN residency at Womack Army Medical Center at Fort Bragg in North Carolina.

Fletcher, who was born and raised in Prineville, Oregon, has always lived in the state. He and his wife Katharina, 3-year-old Karoline, and 1-year-old twins Cassidy and Elijah are excited for what lies ahead during his residency.

“Jacob continues to make us proud,” said COMP-Northwest Assistant Dean Mirabelle Fernandes Paul, EdD. “He has gone through a lot in his young life, but he braved it all, including medical school. Now he is weeks away from serving his country and continuing his medical career as an OB-GYN doctor. What an honor for us to have been part of his journey.”