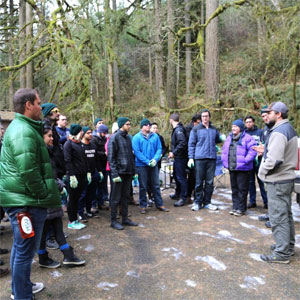 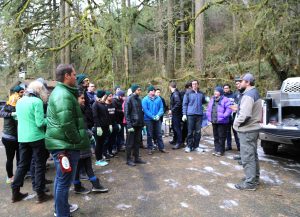 The conference for the Council of Osteopathic Student Government Presidents (COSGP) touched on a variety of topics, including mental health awareness, women in leadership, and political advocacy. The conference culminated with a student service project: trail maintenance at McDowell Creek Falls County Park.

“I know for them it doesn’t seem like much, but for us it really helps out,” said Brian Carroll, director of Linn County Parks and Recreation.

Medical students removed debris from trails that had been damaged in storms, helped repair a staircase at the top of the falls, and spread five yards of gravel at picnic table sites and in areas that were tripping hazards.

It took the 40 students about an hour to complete the work that would’ve taken a full day for two or three Linn County employees, Carroll said.

“Many hands makes light work, and that’s the truth in this particular situation,” he added.

The service project is a requirement for a school to host the COSGP conference. Dylan Rodgers, President of the COMP-Northwest Class of 2019, applied in September to have WesternU COMP-Northwest host. The Lebanon campus ended up welcoming 72 student government presidents and vice presidents, as well as an additional 12 students who had previously served as student government leaders.

“I knew that the family-centered culture of the students, staff, and faculty of COMP-Northwest would provide for an awesome atmosphere for the COSGP to conduct their winter meeting,” he said. “I have an enormous amount of pride for our college, the people who create such a welcoming culture, and the beautiful area that we live in. I also wanted to give our students the opportunity to network and meet other osteopathic medical students from across the nation.”

A research symposium for medical students was held in conjunction with the conference. More than 13 projects were submitted to the symposium.