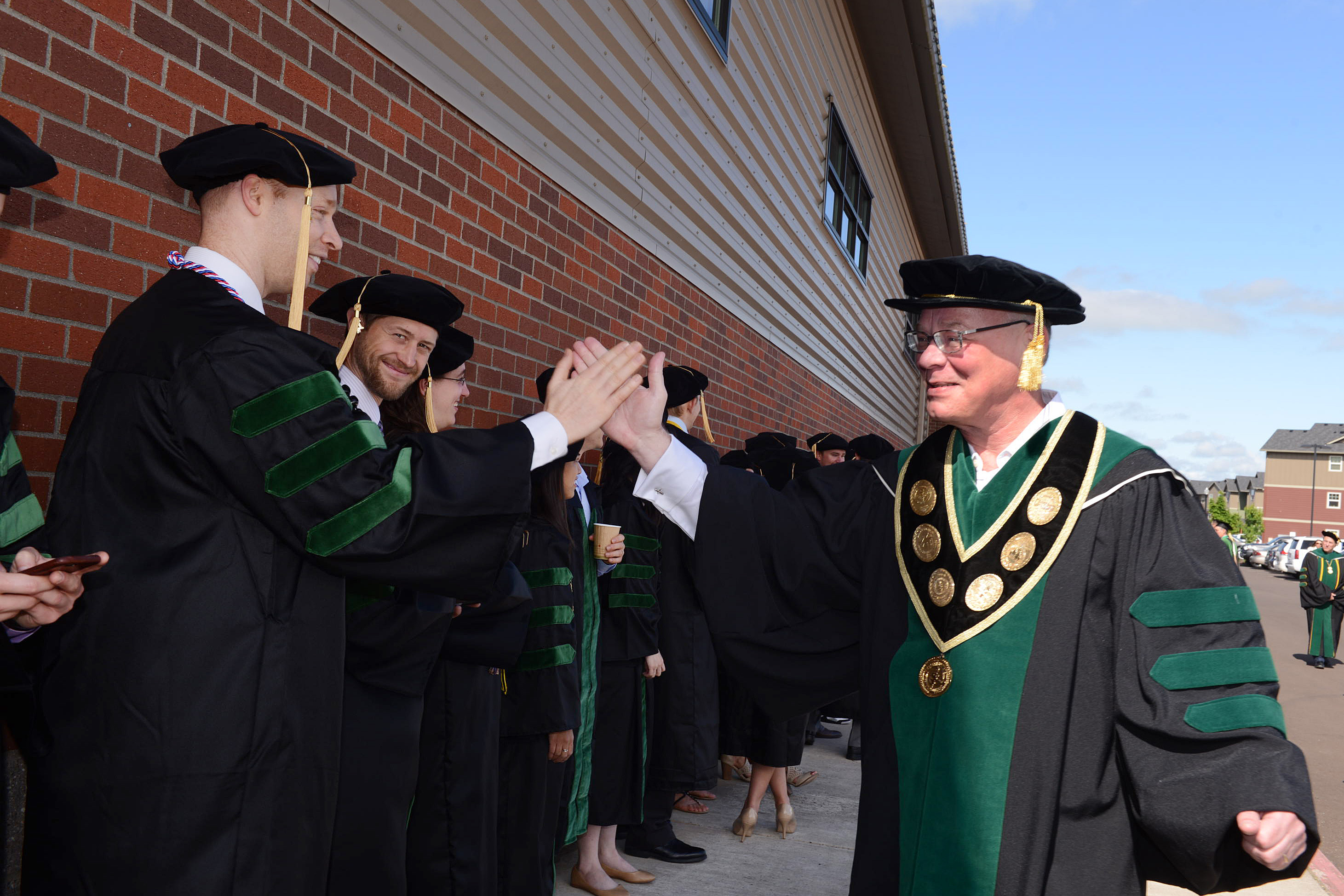 Ninety-four medical students were awarded doctorates in osteopathic medicine on Friday, June 2, joining the ranks of physicians dedicated to improving the future of health care. 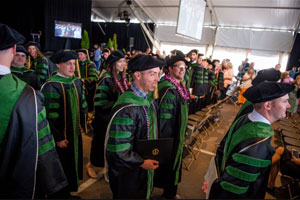 Click to view a slideshow of WesternU COMP-Northwest’s 2017 Commencement ceremony.

Glyn and Colleen Westlake traveled from Sparks, Nevada to celebrate Commencement with their son, Babe Westlake, DO ’17. Babe was injured while playing high school football, and an orthopedic surgeon helped him recover. That sparked his interest in medicine, and now he will enter an orthopedic surgery residency at Good Samaritan Regional Medical Center in Corvallis.

The Westlakes still remember the voicemail message from Assistant Dean John T. Pham, DO, telling Babe he was accepted into the university.

“He said how happy he was to welcome him,” Colleen said. “It was a wonderful message, so open-armed. It made you feel really good.”

Standing on stage with their son and hooding him was a special moment, Colleen said, because his parents knew everything that went into his accomplishment.

“As a parent, you’re so excited for him, but you also see it takes a huge toll. You can see the exhaustion and the stress, and you’re just trying to be supportive without acting too worried,” Colleen said. “To see your child succeed and be able to realize their passion and to know what an accomplishment this is that he’s achieved, it’s an honor to be his parent.”

Babe is one of 32 COMP-Northwest graduates who will complete residency training in the Northwest – 15 in Oregon, 12 in Washington, four in Idaho, and one in Wyoming.

A total of 62 students from the Class of 2017 will go into primary care fields including family medicine (32), internal medicine (20), pediatrics (seven), and OB-GYN (three).

COMP-Northwest graduate Sarah Crowe, DO ’17, who is going into primary care, said graduating feels surreal, exciting and scary. Crowe is entering a family medicine residency at Skagit Regional Health in Mount Vernon, Washington, and plans to practice in Sweet Home, Oregon, where her husband grew up. About two-thirds of the COMP-Northwest Class of 2017 is entering primary care; one of the recruiting goals for COMP-Northwest, and a key reason why WesternU established the Oregon campus, is to train primary care physicians to serve rural areas.

“I think osteopathic medicine in general embodies primary care in that it’s a whole-body approach,” Crowe said. “Specialists tend to look at specific things. We look at the whole picture and try to solve the root cause.”

Having the title of “doctor” in front of her name is exciting and scary, she said.

“You know you’ve done the work, but at the same time that’s a lot of responsibility,” Crowe said, adding with a laugh, “I keep telling friends and family I’m afraid people are going to start listening to me now.”

The importance of having the title “physician” was stressed in the Commencement address delivered by Adrienne White-Faines, MPA, CEO of the American Osteopathic Association.

In her address, White-Faines emphasized the importance of the graduates connecting with their future patients. The new physicians are entering medicine with unimaginable access to data and technology, she said, but individual touch and compassion remain osteopathic medicine’s calling cards.

“No technology can replace your ability to see and engage the person within the patient,” she said.

White-Faines told a story about ordering Starbucks at O’Hare International Airport in Chicago, and how since her name is always mispronounced, she asked the barista to just write the number 10 on her cup. A few moments later, a barista repeatedly called out the name “Pauline,” who she happened to be standing next to. She told White-Faines that she was returning home from the funeral for her sister — her last living relative — and she had no friends. She just wanted to hear someone say her name.

White-Faines asked if she could give her a “big osteopathic hug,” and has never forgotten Pauline.

“I am asking you, as Dr. A.T. Still envisioned for you, embrace your opportunity to create change. Never before in history has there ever been a better time to be a DO,” she said.

WesternU honored another pioneer of osteopathic medicine during Commencement. WesternU President Daniel R. Wilson, MD, PhD, recognized Ethan R. Allen, DO, DSc (Hon.), treasurer for the WesternU Board of Trustees, for his service to the University. Dr. Allen retired May 31 after more than 60 years of practicing medicine.

“Without Dr. Allen there would be no Western University of Health Sciences and we would not be here today,” Wilson said, alluding to Allen’s role as a co-founder of the College of Osteopathic Medicine of the Pacific in Pomona, California, in 1977. COMP is now the flagship college of WesternU.

To close the ceremony, COMP and COMP-Northwest Dean Paula M. Crone, DO ’92, asked the newly-minted physicians to continue being leaders in their communities.

“The patients in your communities will come to recognize you as one of the special physicians – those caring, compassionate, humanistic doctors that no one expected still existed. I am proud to say they still do, and all of you will carry that forward,” Dr. Crone said.

In addition to family and friends, several leaders from the Lebanon community attended the celebration.