WesternU
College of Osteopathic Medicine of the Pacific – Northwest Campus

LEBANON, Oregon – Student-doctors from Western University of Health Sciences were honored with scholarship awards at the school’s Awards & Recognition Ceremony on Tuesday, May 3 at the Boulder Falls Center in Lebanon.

FamilyCare Health Plans awarded $100,000 in funding to students from the College of Osteopathic Medicine of the Pacific-Northwest through the J. Scott Heatherington, DO Scholarship and the Arthur O. Rott, DO Scholarship.

Jeff Heatherington, LHD (Hon.), president and CEO of FamilyCare Health Plans, presented the scholarships alongside Robin Richardson, DO, chairman of FamilyCare’s Board of Directors.

“These are two giants in the profession,” Dr. Heatherington said of his father, J. Scott Heatherington, DO, and Arthur O. Rott, DO. “We hope we have some more giants sitting here in the crowd.”

Second-year medical students who earned the FamilyCare scholarships will receive $20,000 annually for the remainder of their education at COMP-Northwest. The Heatherington and Rott scholarships were created in 2012 with a focus on investing in future physicians who plan to practice medicine in Oregon. 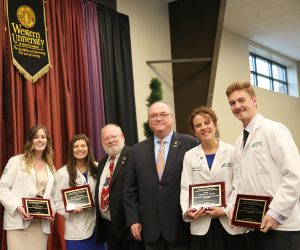