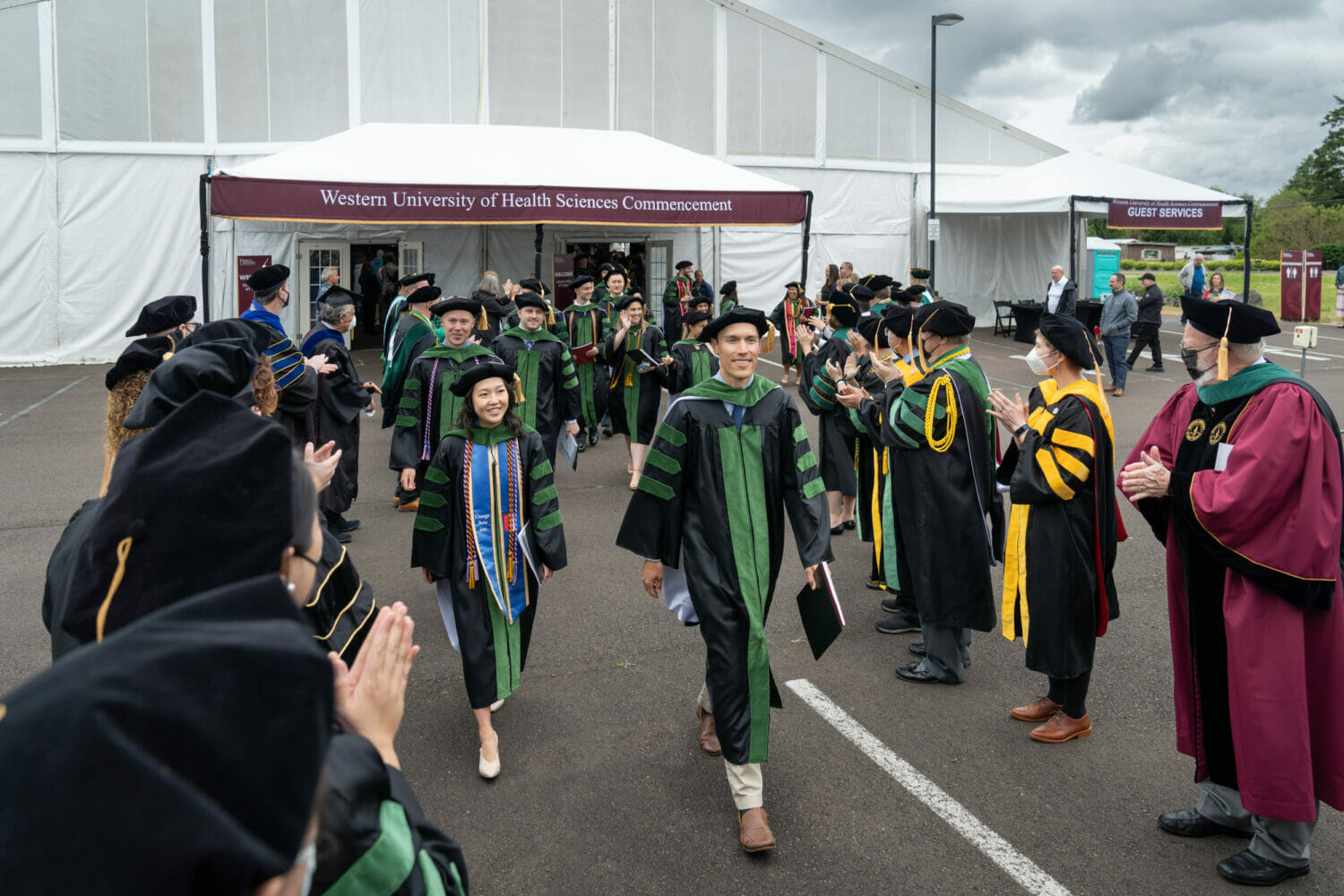 2022Alumni and GivingCollege of Osteopathic Medicine of the Pacific – Northwest Campus

Western University of Health Sciences celebrated 104 College of Osteopathic Medicine of the Pacific-Northwest graduates at Commencement May 27, 2022, held in Lebanon, Oregon. 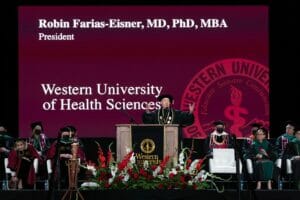 WesternU President Robin Farias-Eisner, MD, PhD, MBA, presided over Commencement for the first time as president and provided the keynote address. COMP-Northwest’s Commencement was the sixth and final WesternU ceremony, in which the University conferred degrees on more than 1,000 graduates. This comes during an exciting time for WesternU in Lebanon, and Farias-Eisner said he loves the opportunity to serve this fine community in the Willamette Valley.

“I am 500% committed to the growth and expansion of COMP-Northwest and for PT, OT, and all that will come in the future. I am 500% committed to you students, to the faculty, our staff, and to all here in this area and on this campus. I love what I see in Oregon,” Farias-Eisner said. “I am also immensely committed to rural medicine, equity, elimination of health care disparities, our rural communities, right here in Oregon. I am also committed to primary care, population health, community medicine, right here in Oregon. This year’s Commencement theme is gratitude, and I give gratitude to this community for the extraordinary support that you have given to these esteemed graduates. Please join me in recognizing this amazing feat.” 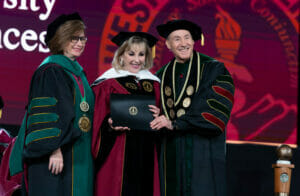 Farias-Eisner bestowed an honorary degree on the Vice Chair of the WesternU Board of Trustees, the Hon. Consuelo M. Callahan, LLM, JD, who joined the board in 2018. She was recognized for spending countless hours serving WesternU students and faculty through the challenging years of the pandemic and the years of transition to new leadership, Farias-Eisner said. 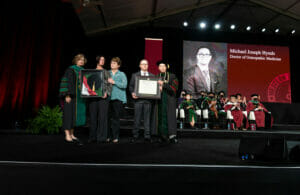 The first degree conferred was a posthumous degree to Michael Joseph Hynds, who passed away on Dec. 16, 2021. His parents, Ann and Philip Hynds, and his aunt, Dr. Karen Maloney, received his diploma, cap, tassel and cords on the Commencement stage.

Hynds’ family established the Dr. Michael J. Hynds Memorial Fund, and through the support of his family and friends and his COMP-Northwest family, the memorial fund has attained full endowment.

“Michael had a driving passion for medicine, developing a strong connection to surgery and he had a bright future as a surgeon. Extremely dedicated to his studies, Michael took pride in staying in the top 10% of his class and being on the Dean’s List year after year,” said WesternU Oregon Assistant Vice President and COMP-Northwest Assistant Dean Mirabelle Fernandes Paul, EdD. “Most of all, Michael wanted to serve his patients well. He dazzled his preceptors with impressive medical knowledge, great bedside manner and a natural ability to instantly make patients feel comfortable. Michael also demonstrated the attitude and professionalism that would have made him an exceptional osteopathic physician. Dr. Michael J. Hynds will forever live in our hearts and will be missed by faculty, staff and students who were touched by his laughter, humor and kindness. May all of our graduates carry his passion forward as they embark as future physicians.”

COMP-Northwest graduate Kun Woo Lee, DO ’22, said it felt surreal to finally make it to Commencement, and it represents the next step in becoming a physician.

“I remember four years ago at our white coat ceremony thinking, ‘what will it be like to be in this position?’” he said. “It’s a lot of responsibility you have to take on, but it’s definitely a rewarding moment.” 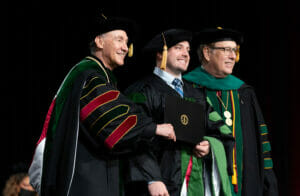 The COMP-Northwest Class of 2022 included two graduates who grew up in Lebanon – Whitley Nelson, DO ’22, and Austin Kleint, DO ’22. Kleint will enter a pediatrics residency at Baylor College of Medicine in San Antonio, Texas.

Kleint appreciates how COMP-Northwest and Lebanon have helped each other. Kleint served as a volunteer assistant wrestling coach his first two years of medical school. He volunteered at Riverview Elementary School and created a summer camp called Student Healthcare Immersion Program to help expose middle and high school kids to careers in health care.

“Lebanon has been extremely welcoming. Many small businesses have hosted events for students and given discounts and more,” Kleint said. “I will miss learning medicine in the town that I grew up in and made me who I am. I always thought I would come back to Lebanon to practice medicine but that is ultimately up to where God wants me.” 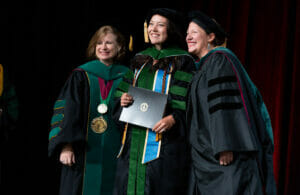 “I was drawn to surgery from the beginning of medical school, but I wanted to keep an open mind and focus on learning. As I moved through anatomy and clinical training, I had excellent attendings and mentors and my experiences confirmed my passion for surgery,” Nelson said. “My grandmother’s experience with cancer and the end of her life during my undergraduate years also had a big impact on me and my desire to go into surgery.”

She plans to do rural general surgery in Oregon, but for now is focused on the next five years of surgical training. Walking on stage while being addressed as “doctor” for the first time will be special.

“It will be a humbling moment as I reflect on the time it has taken to get here and all the patients who I have had the privilege of working with and learning from over the past four years, many of whom I will never forget,” Nelson said. “At the same time, I am very excited and eager to begin the next phase of my training.”