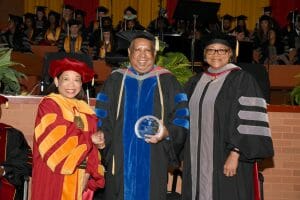 “I feel as if I’ve never left Tuskegee,” Nelson said. “I’m an active alum and I’ve always been appreciative of the opportunity.”

Dr. Nelson applied to veterinary school in a different era than today’s candidates. Women were actively discouraged from entering the profession and minorities were discouraged or blocked from applying save for some notable exceptions, he said.

“The racial norms were much different, particularly in the Deep South,” Nelson said. “I could not apply to every school. One school that I applied to actually called me when they received my application to remind me there was a ‘special school’ just for me, and they wanted to make sure I knew about that school because they weren’t going to allow me to apply to them.”

Dr. Nelson said being honored as an alumnus means even more to him because he appreciates that Tuskegee provided him opportunities that other institutions did not.

“I have a special place in my heart for Tuskegee because they were there for me, and I feel that Tuskegee is the safety net for minorities, if you will,” Nelson said. “The talk of the town right now, the political atmosphere that we’re going through now, reminds us of the threat of taking 10 steps backward and reminds us of the importance of having that safety net even though things have changed.”

The commencement ceremony was held in the Tuskegee University Chapel, which is world-renowned for its architecture. Dr. Nelson said he attended church services there as a student.

Dr. Nelson sees parallels between Tuskegee graduates of his era and graduates from WesternU College of Veterinary Medicine’s first decade of existence.

“We all (Tuskegee graduates) had chips on our shoulders, for different reasons,” he said. “The profession questioned WesternU’s approach to education. The profession even questioned the need of the existence of a new veterinary school. There are a number of corollary comparisons between Tuskegee’s history and WesternU’s recent history.

“I can only hope we develop the same kind of allegiance among WesternU graduates that Tuskegee seems to have developed with their graduates. I just hope we don’t need the external forces that contributed to that allegiance for Tuskegee here at WesternU.”

WesternU CVM graduates have proved the naysayers wrong as they have entered the profession and excelled, he said.

“We no longer suffer the slings and arrows of rabid critics, largely because our graduates have proven to be more than competent and qualified,” Nelson said. “I just hope that our graduates recognize the benefit of their education and the value of their diploma.”

CVM faculty remind students daily that they are aspiring to be a member of the elite class in society, and as such they have a responsibility to engage in society’s advances, needs and ills, Nelson said.

“There is no doubt that society needs veterinary medicine. The doubt is how they are going to engage in meeting those needs. While doing so, we expect them to open their arms and embrace the less fortunate. To use the considerable skills that they’ve learned to help them to pay it forward, just as they have been helped not just by faculty, but by people who did not know them but appreciated the impact of the skills that the profession has, to the point that they have contributed financially and through sweat equity to support their education,” he said. “We hope they understand that they did not do this alone and they did not just purchase a non-living piece of paper. Their degree simply represents what could be, and we’re interested in what they do with it.”