WesternU
CaliforniaCollege of Osteopathic Medicine of the PacificCollege of Pharmacy

The project focuses on the non-β-blocking enantiomer of a β-blocker, R-carvedilol, in preventing skin cancer linked to sunlight UV overexposure. The project’s goals are to determine the molecular targets, safety and efficacy of R-carvedilol against UV-mediated skin damage, inflammation, defective immunity and cancer development.

Dr. Huang’s research team includes co-investigators Dr. Bradley Andresen, Dr. Jeffrey Wang and postdoctoral fellow Dr. Ayaz Shahid from the College of Pharmacy, the pathologist consultant Dr. Cyrus Parsa from the College of Osteopathic Medicine of the Pacific, and external consultants Dr. Frank Meyskens and Dr. Kristen Kelly from the University of California, Irvine. Dr. Huang and her team initially received an NIH/NCI R15 grant of $409,223 in 2018 for an earlier phase of this project.

For the previous R15 project, “We needed to make sure we chose the right lipids as drug delivery vesicles,” Huang said. “We also needed to adjust the ratio of the drug versus the lipids to make sure the formulation is stable. The goal was to develop a stable formulation that works topically on skin.”

Such formulation was successfully made. In January 2022, the team published their key findings, “Topical carvedilol delivery prevents UV-induced skin cancer with negligible systemic absorption,” in International Journal of Pharmaceutics.

To achieve another goal of the funded R15 project, for the past three years, the research team has been working with a mixture of S- and R-carvedilol, which is the marked product of carvedilol, in comparison with the single isomer R-carvedilol in a pure form. To their surprise, the team has found that the R-carvedilol pure form prevents skin cancer despite not being a β-blocker.

In 2021, the team published the work “Prevention of skin carcinogenesis by the non-β-blocking R-carvedilol enantiomer” in Cancer Prevention Research. This work is featured on the cover of the May 2021 issue of the journal.

Carvedilol is an FDA-approved cardiovascular drug that has been in the market for three decades with no significant side effects reported, so safety is not too much of a concern. More importantly, R-carvedilol, which does not bind to the common receptors for β-blockers, justify the need to develop the single isomer as a cancer preventive agent for clinical use. This was one of the key factors for the project receiving a fundable NIH score from the reviewer, Huang said.

As the leader of a productive research team, Huang said, “I cannot get this award by myself. This is a good example of team effort. So many people have contributed to this.”

Huang is quick to thank her team of colleagues, her post-doctoral fellow and her current and former students for their contributions. 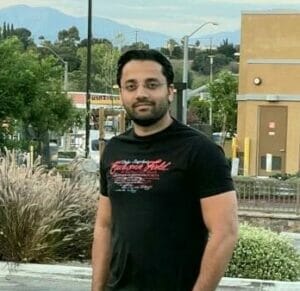 “Being part of this R01 is like a dream for me since Dr. Huang always inspires me to explore the unknown. This is a great opportunity for me to continue growing under her guidance until I become an independent researcher,” said postdoctoral fellow Dr. Ayaz Shahid, who joined Huang’s team in August 2019.

Furthermore, Huang is very grateful for the support from the University and the College of Pharmacy in providing research space, intramural funds to support graduate students, and “cost-sharing” the salary of her postdoctoral fellow. And the R01 funding is very important to further support the team and the research space, and to build a stronger research community within WesternU.