WesternU College of Pharmacy held its 25th Anniversary Gala Celebration at Noor in Pasadena Saturday, Feb. 26, 2022. About 200 guests, including many alumni, enjoyed the celebration.
Alumni and GivingCaliforniaCollege of Pharmacy

Western University of Health Sciences’ College of Pharmacy celebrated 25 years of accomplishments and student-centered growth and thanked the faculty, staff, students, alumni, and supporters who helped the College reach these milestones.

The WesternU College of Pharmacy (COP) welcomed about 200 guests to its 25th anniversary gala on Saturday, Feb. 26, 2022 at NOOR in Pasadena, California. The event provided the College with the opportunity to honor alumni, faculty and supporters for their contributions and to strengthen the connections between all COP stakeholders. 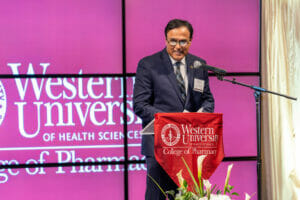 COP has grown from a charter class of 67 students to more than 3,000 graduates, from empty laboratory shelves to state-of-the-art equipment, with NIH funding that ranks the College amongst the top private pharmacy schools in the country, said COP Dean Sunil Prabhu, BPharm, PhD.

“Nothing would be possible without three key elements: one, our students and alumni who have made us proud as a college year after year with their high performance in board exams and successes in achieving great heights in the practice of the profession,” Prabhu said. “Two, our faculty who selflessly serve to ensure student and college success, and three, our staff that are the key to keeping the ship afloat. There is a lot of work left to do and challenges to overcome, but I am glad to be in the right place at the right time to keep moving our mission forward.” 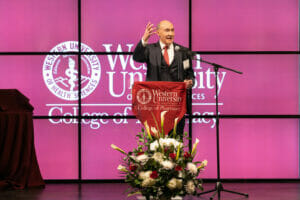 The gala featured many College and University dignitaries. WesternU President Robin Farias-Eisner, MD, PhD, MBA, who began his tenure as president on March 1, said he has met many stakeholders over the past several months.

“What these meetings corroborated for me, that we are truly a team aligned and united together behind the principles of humanism, caring, compassionate and patient-centered care in higher education, an integral part of what I see as the WesternU DNA,” Farias-Eisner said. “How incredible that our distinct colleges, the College of Pharmacy a shining example, share a common dedication to a humanistic approach – putting the patient first. Our quest is to achieve a transformative health for both people and animals, hence, to create a healthy society for present and future generations to come. Together, let us unify behind a special mission and vision and catapult WesternU to the national and international recognition, appreciation, and acclaim that it so deserves.”

The College of Pharmacy was built on trailblazing, innovative ideas, said COP Dean Emeritus Max Ray, PharmD, MS, who served as professor and dean from 1996 to 2006. The College was always a student-centered program, he said. One example is the block system, where students are completely immersed in one subject area for 18 days. This idea was the brainchild of founding faculty member Dr. Patricia Chase, who attended the gala.

“(Students) mastered that and then they moved to the next block,” Ray said. “This was one of the early initiatives in American pharmacy education in curricular integration. As the students went through the program the curriculum was integrated and each block reinforced with what they had learned previously.” 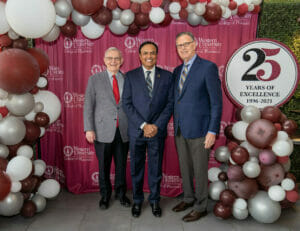 Ray had a hand in finding his successor as COP dean when he shared a cab in Boston with Daniel Robinson, PharmD, FASHP, who was dean of Northeastern University’s School of Pharmacy at the time. Ray had announced his retirement and he asked Robinson to consider applying to become COP dean.

“I was flattered, and I was so grateful for the opportunity to spend the last 15, almost 16 years at WesternU,” Robinson said. “It’s just been the journey of a lifetime. I have loved every moment of it. I’ll be retiring at the end of June, but I will continue to do things with and for the University in retirement. Thank you so much for making this such a great evening. I really appreciate you all so much.”

Robinson, who served as COP dean from 2006 to 2021 and continues to serve as a professor, received a standing ovation from the audience.

“We heard the term family time and time again (tonight). This is my family,” Robinson said. “I love you all, really.”

The evening concluded with awards and special presentations. WesternU Chief of Community and Governmental Affairs Jeff Keating, MA, presented to the College certificates of recognition from the Pomona City Council and state Sen. Connie Leyva. 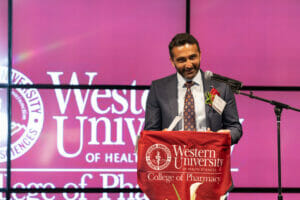 “I’m sure there are many alumni with a similar story as mine, so I urge all alumni to invest in their future by giving back to the College, whether financially or in kind, and increasing the intangible currency of the University’s reputation,” said Bhavesh Desai, PharmD ’02. “This will not only help future generations of pharmacists but also positively impact the University’s image in their community.” 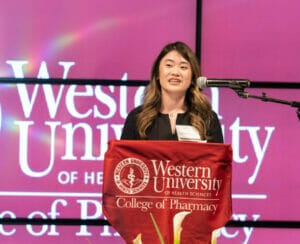 Stephanie Ho, PharmD ’17, said she believes her accomplishments are not entirely her own. Rather, they are the culmination of many years of mentorship. She thanked COP faculty Mark Nguyen, PharmD, Patrick Chan, PharmD, PhD, and Eric Gupta, PharmD, who served as the master of ceremonies, for their guidance and support.

“I wouldn’t be here today without any of my mentors,” Ho said. “I’m equally excited though for the many more years of success to come for WesternU College of Pharmacy. I often have debates with my colleagues on which pharmacy school is the best. In my opinion, it’s not a debate. It’s definitely WesternU College of Pharmacy. All of you here today really speaks to that and the mentorship that all of you provide to our future generations of pharmacists really will lead the profession of pharmacy.”

Prabhu closed by telling COP alumni that he has made connecting with them a priority as dean. He asked them to spread the word amongst their classmates to re-engage with the College through strategic planning, the Dean’s Advisory Council, town hall meetings and “Dinner with Dr. Prabhu,” among other activities.

“I need your help to train the next generation of pharmacists at your practice sites, I need your participation in recruiting and admitting our next classes of pharmacists,” Prabhu said. “There are many opportunities to get involved, and I realize all of us have busy lives, but your involvement will result in lasting impressions to future generations of pharmacists. Let’s work together to keep this college growing and moving forward.”