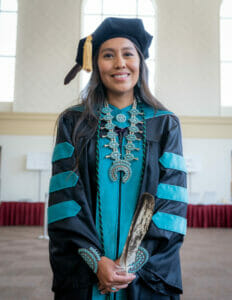 Western University of Health Sciences College of Optometry graduate Kaydee McCray, OD ’22, MSMS ’15, a member of the Navajo (Diné, Naabeehó) people, will soon begin a residency in ocular disease/primary care at the Gallup Indian Medical Center in Gallup, New Mexico, on the border of the Navajo Nation.

As a College of Optometry student, she completed two clinical rotations with the Indian Health Service (IHS), one on the Gila River reservation in Arizona and the other in Fort Defiance, located within the Navajo Nation where she could explain optometry terms to patients in Navajo. Working with Native American populations is dear to her heart, McCray said.

“It was really rewarding working with these communities. You have that connectedness and rapport you can build with patients,” she said. “You see a lot of the adverse effects of post-colonial life, which is one of the many reasons why you see certain systemic diseases come up in the eye. Having that background and understanding the generational traumas and challenges these nations go through gives you a better understanding of how you can provide care for them.”

“Growing up on a reservation, you see many communities working hard to address the diabetes epidemic. But to come back, as a student doctor, I saw it more frequently with each patient encounter. Certain populations are prone to certain diseases,” McCray said. “The need (for health care providers) is very high across most reservations. The Indian Health Service offers a loan repayment program which can contribute to the high turnover rate, but there are still some providers who do enjoy what they do.” 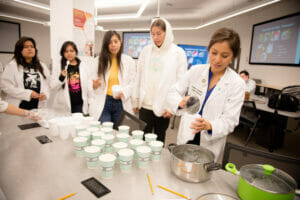 Caring for Native American people from other tribes is a continuing cultural learning process, McCray said. Some tribes are not as open with outside providers. There are some universal similarities, but differences as well. “It’s great when you understand the language and understand where your patient is coming from,” McCray said. “It sets the tone for the way an exam is run. You can provide other resources to help the patient, not just from an optometry standpoint, but for their entire well-being.”

The IHS is an agency within the Department of Health and Human Services that provides a comprehensive health service delivery system for approximately 2.56 million of the nation’s estimated 5.2 million American Indians and Alaska Natives, according to the IHS website.

Diseases of the heart, malignant neoplasm, unintentional injuries, and diabetes are leading causes of American Indian and Alaska Native deaths (2009-2011). American Indians and Alaska Natives born today have a life expectancy that is 5.5 years less than the U.S. all races population (73.0 years to 78.5 years, respectively), according to IHS.

McCray provided care to low-income, underserved populations as a WesternU CO student, so she understands how these factors contribute to eating habits, and how barriers for transportation might lead to cancellations and no-shows. “In that regard, WesternU does a good job,” she said. “WesternU has really set the tone for the kind of empathy you want to give your patients across clinical experiences.”

“We are all so proud of Dr. McCray and her accomplishments,” said College of Optometry Founding Dean Elizabeth Hoppe, OD, MPH, DrPH. “It has truly been an honor to assist her on her journey. We are very excited as she begins the next chapter in her residency dedicated to advancing her scope of practice while providing culturally and linguistically appropriate care to the residents of the Navajo Nation.”

McCray grew up in a small town of about 3,000 people in the New Mexico portion of the Navajo Nation. She attended Fort Lewis College on a running scholarship, then transferred to Northern Arizona University and earned her bachelor’s degree in biomedical sciences. She worked two years in private practice and then came to WesternU for the Master of Science in Medical Sciences (MSMS) program, which prepares students for a four-year doctorate program.

The MSMS program requires a capstone research project, so she conducted research under College of Optometry Professor Pinakin Davey, PhD, OD, FAAO. Among her projects included topics on contrast sensitivity, visual acuity and participating in a Phase III clinical trial for imaging devices.

“It’s great to have that in my arsenal of tools,” McCray said. “When I get immersed in my career, it’s something I would like to pick up again. Research in Native communities is something that I would like to pursue to create new opportunities for services or programs.” 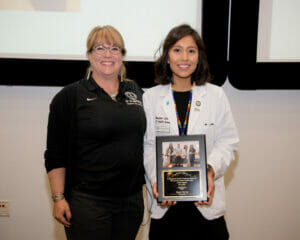 McCray also worked for the Center for Academic Community Engagement (ACE) in organizing the WesternU American Indian Health Career Ladder from September 2014 to May 2021. The AIHCL provides hands-on training and mentorship for Native American students interested in health care as well as providing cultural sensitivity and awareness for WesternU student volunteers.

“The American Indian Health Career Ladder kept me tethered to my Native identity by building relationships and cultural connectedness with Native youth and local presenters. The programing was drawn from my own cultural experiences and including presenters from surrounding Indigenous tribes,” McCray said. “When you have Native students looking up to you, especially as a minority, showing them they can be in the same position I am, it’s humbling and gave me strength as an optometry student too.”

“As much as we guided the development of her academic and clinical skills, Dr. McCray educated the WesternU community about Native issues and challenges,” said WesternU Associate Provost and Associate Vice President for Academic Community Engagement Elizabeth Rega, PhD. “Dr. McCray’s achievement represents the ideal culmination of WesternU health professions pathway programming.  She has come from a community with unique historical health and economic challenges. She is returning to that community with her doctoral expertise to work on local solutions appropriate to the people she serves. We could not be prouder or more grateful for the time we had together. We are looking forward to future collaboration with Dr. McCray.”

Throughout her time at WesternU, her mentors came through for her, including Dr. Rega, Dr. Tiffenie Harris, Dr. Pinakin Davey and Dr. Bradley Henson, who is Kaskaskia through his paternal grandfather and Lake Superior Ojibwe through his maternal grandmother.

“Both (Drs. Rega and Henson) of them were very understanding of what it meant to be Native American in higher education. They both understood where I came from, living in two uniquely different worlds as a Native American student,” McCray said. “They have really contributed in so many different ways to my professional and personal development. I think that was what has helped me to set new goals and I’m looking forward to the future.” 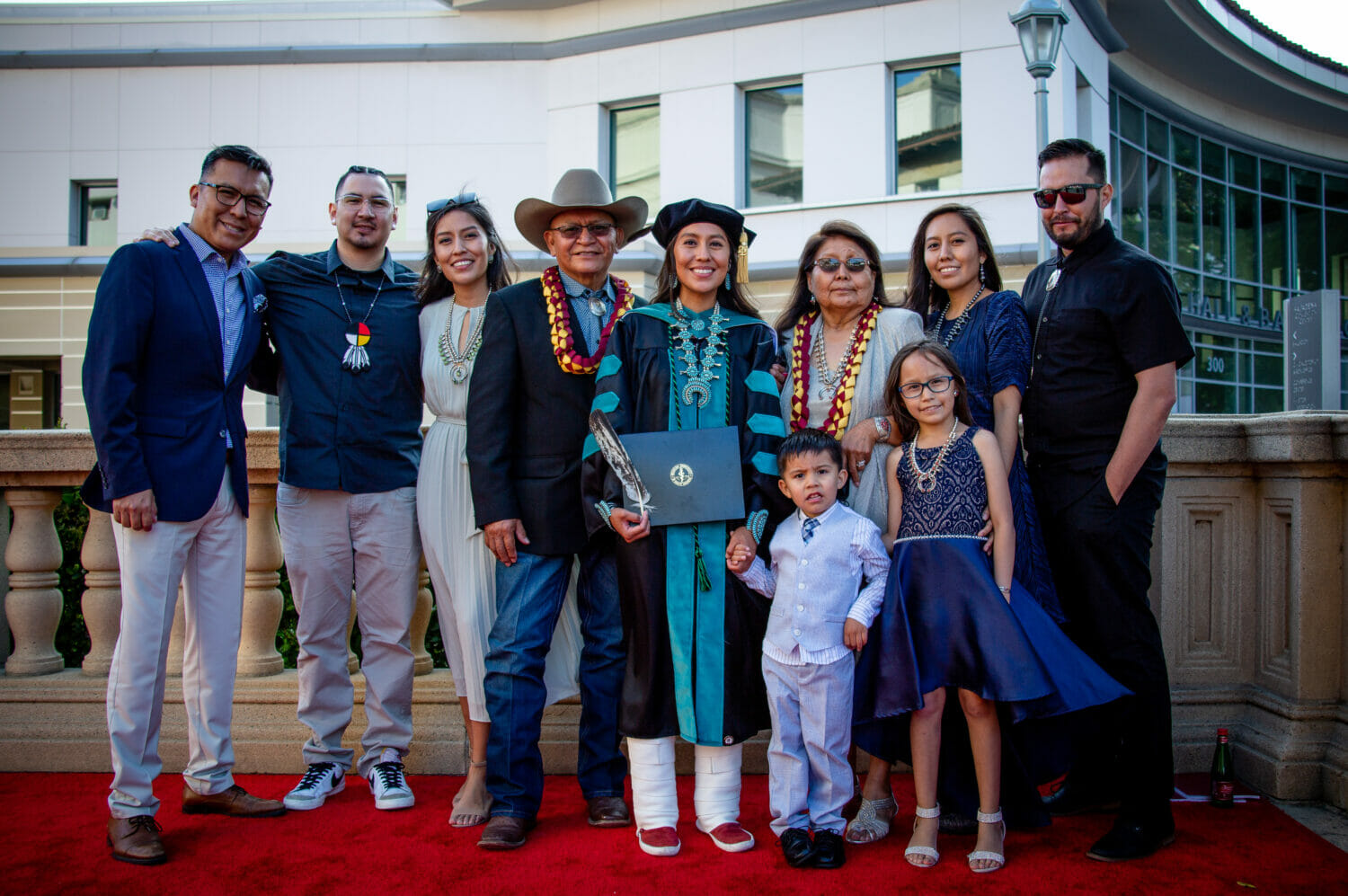