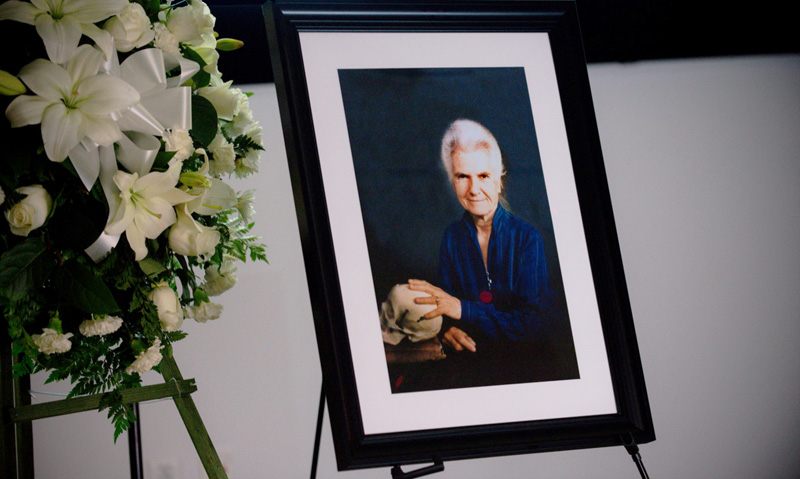 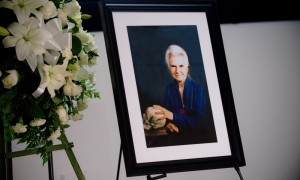 Western University of Health Sciences celebrated the life of Viola Frymann, DO, FAAO, FCA, a pioneer and legend of osteopathic medicine and founding board member of the College of Osteopathic Medicine of the Pacific.

“When you met Dr. Frymann, you went through a change in your attitude. She had the capacity to make you feel different, to make you feel better,” he said. “She was a model for a scientist and a humanist. I think that was an important part of her lesson to us, the science of cranial medicine and humanism coming together. I would say to her, ‘Thank you Viola, for all you accomplished and what you have taught us.’”

A mainstay of California’s osteopathic profession, Frymann was a founding board member of the College of Osteopathic Medicine of the Pacific in 1977. She also served on the Board of Governors of the American Academy of Osteopathy, and was a founding member and past president of Osteopathic Physicians and Surgeons of California (OPSC) and of the Cranial Academy. In addition to serving on COMP’s founding board, she chaired COMP’s Osteopathic Manipulative Medicine (OMM) Department, and continued to work as an adjunct faculty member until her retirement a few years ago.

Frymann played a pivotal role in the revitalization of the osteopathic profession in California in the 1970s. She was one of the Doctors of Osteopathic Medicine (DOs) who worked diligently to re-establish osteopathic education in California with the establishment of COMP in 1977, said WesternU Interim President Gary Gugelchuk, PhD.

“So in fact Dr. Frymann is an important founder of this entire institution, and her DNA is about as strongly established a part of this institution as the others you see on the walls of this building,” he said. “My recollection of her goes back to 1986, when she was still chair of the OMM department. When I first met her, the sense you saw from her immediately was determination, forcefulness and discipline. But there was also a real warmth and caring. You couldn’t help but love her.”

Frymann was a true legend of osteopathic medicine and an example of a rich life well lived, said COMP Dean Paula Crone, DO ’92.

“She leaves behind a long-lasting impact, a legacy that will live forward, in all the students that she trained and all the patients that they subsequently treated,” Crone said. “We lost one of the giants in our osteopathic profession, one who’s shoulders many have stood upon. Thank you, Dr. Frymann, for all you did for our profession.”

Frymann’s many years in family practice in La Jolla were focused on the problems of children. In 1982, she founded the Osteopathic Center for Children. Frymann published research on newborn babies, the cranial rhythmic impulse, learning disabilities of children, and the effect of osteopathic manipulative treatment on children with neurologic developmental problems. Her collected works were published in a book by the American Academy of Osteopathy in 1998. She also taught throughout the world, with emphasis on osteopathy in the cranial field, teaching courses regularly in France, Italy, Canada, Switzerland, Belgium, England, China, Japan, Latvia, Russia, Australia and Denmark.

Shawn K. Centers, DO, FACOP, worked closely with Frymann as medical director of the Osteopathic Center for Children. Children were able to live better lives under her care, and she accomplished what many would call miraculous, he said. As a student and fellow when he was rotating with Frymann, he thought she had a secret technique that she only taught to a special few.

“But what I learned over the years working with Dr. Frymann is that there was no secret technique. She practiced osteopathy simply, plainly, and precisely. Nothing more and nothing less,” Centers said. “I learned from Dr. Frymann that if we practice these same techniques diligently, consistently and precisely, we would get the same results. The so-called miracles were not miracles, but simply the expected result if one used their hands and practiced true osteopathy.”

Lorane Dick, DO, who succeeded Frymann as COMP OMM Chair in 1986, said she enjoyed watching a video of Dr. Frymann at work because watching her hands (which felt “like vise grips”) was always amazing.

“One of the things she would say if she were here today is she would bless each of us on our journey, and then she would ask that we carry the love and joy with us to our patients,” Dick said. “She was always intent on forwarding the vision of osteopathy, and for each of us to continue the work of osteopathy.”

To emphasize this point, Rebecca Giusti, DO ’03, COMP Chair of the NMM (Neuromusculoskeletal Medicine)/OMM Department, asked everyone in the audience in Pomona and at COMP-Northwest in Lebanon, Oregon, who were watching via live video feed, to stand up if they were mentored or treated by Dr. Frymann. Most of the audience stood up. She then asked students to stand up.

“She’s no longer with us physically, but she’s here in this room. And she’ll continue to go on in all of us as long as we continue to hold those principles dear to us, and as long as every day we go out and do our best, whether it’s  treating our patients, caring for their families, educating our students, being mentors, being preceptors,” Giusti said. “That’s how this all works. And that’s how this all carries forward. That’s how every day, people’s lives are optimized and improved.”