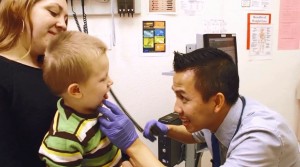 Western University of Health Sciences alumnus Kelvin Vu, DO ‘08, made one the best decision of his life when he applied for and received a four-year National Health Service Corps (NHSC) scholarship before entering medical school.

The College of Osteopathic Medicine of the Pacific (COMP) graduate knew that NHSC would provide him with financial freedom coming out of medical school after completing his residency by agreeing to provide primary care in an underserved area for four years.

Vu heard about the NHSC scholarship and repayment program when he was studying for his MCAT.

“Thanks to the NHSC, I had no debt. I was able to choose where I wanted to work based on what type of medicine I was going to practice and based on the population that I wanted to serve, and that freedom is very hard to get nowadays,” Vu said. “I based my decision on my heart and on my passion to help the underserved.”

As a WesternU student, Vu had several primary areas to choose from, including pediatrics, OBGYN, general surgery and family medicine. He knew he wanted to go into primary care, but it wasn’t until his rotation under the guidance of COMP Department of Family Medicine Professor Alan Cundari, DO ’85, MSHPE ’92, that he felt family medicine was right for him.

“That’s where I felt I was going to make the biggest impact,” Vu said. “I felt it was important to able to see any patient that walked through the door, whether they were pediatric, healthy adult, or from the geriatric population, so during my fourth-year rotation I knew I wanted to be a family physician.”

While Vu was a student at COMP he was active in the Pomona Community Health Action Teach (PCHAT) and the Pomona Homeless Outreach Program (PHOP), serving in leadership for both clubs.

Being part of a team in PHOP exposed him to the homeless population, which has helped Vu succeed as a practicing family physician at Open Door Community Health Centers (ODCHC) in Humboldt County, California. He is also medical director of Mobile Health Services, which is one of 11 ODCHC clinics.

“PHOP and PCHAT were where I was able to develop and gain a passion for working with the undeserved population,” Vu said. “Now I’m part of this community in Humboldt County, using a mobile van to provide acute care and chronic and disease management to our homeless and indigent population.”

Vu and his wife, Tara, who is also a physician practicing in Humboldt County, have a 14-month-old son, Iver. They have settled down in the area and plan to offer care to the community for a long time.

Vu has learned a lot over the last five years living in a community that desperately needs health care professionals and better access to care.

“By interacting with them, I feel like I’m getting a glimpse into each of my patients’ lives and I’m growing with them,” Vu said. “The most enjoyable part is providing care to people of all walks of life (and) giving access to people who would normally not get care anywhere else.”

Vu was featured in a video produced by the NHSC. Click here to watch it on YouTube.

The scholarship pays tuition, fees, other educational costs, and provides a living stipend in return for a commitment to work at least two years at an NHSC-approved site in a medically underserved community, according to its website.

The application cycle for the NHSC Scholarship Program opens in March 2016 and closes on April 28.