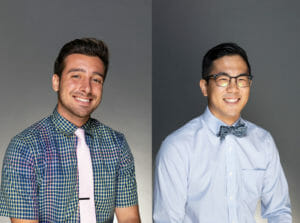 “They have utilized social media as a means of connecting with other current and aspiring dental students to learn and give advice. Only in their 20s, these ‘dental student influencers’ below have made long-lasting impacts on others and are just getting started,” according to the magazine.

“We are excited to see two of our College of Dental Medicine student ‘influencers’ recognized for their positive portrayal of the dental profession and WesternU via their strong social media presence,” said CDM Dean Steven W. Friedrichsen, DDS.

CDM students Michael Yoo (@smilesforyoo) and Kamran Pakdamanian (@smileswithkammy) were among the top 10, and CDM was the only dental school with two students listed.

“Incisal Edge leadership reached out to me and other America’s Top 40 Under 40 Dentists alumni a few months ago to nominate a few of our students with positive social media presence. I asked students who were interested through my social media platform @slavasanidds and submitted their information,” said CDM Associate Professor Setareh Lavasani, DDS, MS. “I am very pleasantly surprised that out of so many nominations, we are the only school with two nominations in the 10 students that were chosen! The students were ecstatic for this recognition! I was too. The reality is that social media is one of this generation’s favorite communication tools and the sooner we acknowledge its power to educate and inspire, the larger collective positive ‘influence’ we could have as educators, dental students, future dentists and practice owners.”

Third-year CDM student Michael Yoo uses his social media platform to share his story to inspire others. He applied to dental school three times before being accepted. He started posting tips for pre-dental students on YouTube.

“I’m immensely grateful that students have resonated with the content I’ve put out on the internet. I’m also super thankful for my classmates and faculty that have supported me in this mission to educate and bring hope to our pre-dental community,” Yoo said. “Being featured in the Incisal Edge Magazine is a tribute to all the impact my colleagues and I have made in the lives of future dentists.”

Rather than influencing or being an “influencer,” Yoo said he would like to encourage students to take pride in their own stories and to be proactive about their goals.

“For that matter, I’ve tried to redefine being an influencer as someone who could educate, console, and inspire. In doing so, my colleagues and I have guided many pre-dental students during such an uncertain time in their lives,” Yoo said. “Through highlighting my journey alongside the unique stories of my classmates, pre-dental students have begun to see that there are multiple ways of getting into dental school. In doing so, pre-dental students have been inspired to embrace their own dental school applications. Additionally, applicants have started looking up to WesternU dental students as a resource for mentorship and growth. This is because WesternU students strive to be the best and value humanistic growth. I hope that continuing with my social media will propel WesternU as one of the top dental schools in the nation and impact the lives of many aspiring dentists.”

Being an “influencer” in today’s platforms can have different meanings, said second-year CDM student Kamran Pakdamanian. “Influencers” are either promoting products for different companies or they are showcasing their journey throughout the endeavor they are facing.

“For me, while showcasing my journey, being named an ‘influencer’ shows me that my story resonates well with many people in the field of dentistry,” he said. “Along with the connections that I have made with my followers, I have been able to collaborate and work with big companies such as Henry Schein, Orascoptic, and Kilgore International.”

Social media can be a double-edged sword because of the power of the platform.

“I am sure many of us have witnessed how it can be used for good and for bad, demonstrating its underlying power. But for many, including myself, it is a tool used to spread positivity and awareness. It is a platform in which we may also heal others, and promote wellness,” Pakdamanian said. “Think about it. You can literally speak to anyone in the world in an instant! Isn’t that amazing? I bring this up because of the value it brings to any future business owner. By promoting yourself on a platform, and allowing your work to be displayed, you are helping yourself gain the recognition you deserve. So take advantage of it! Go out and show the world what you are made of.”