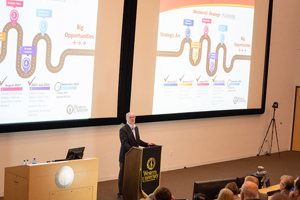 The state of WesternU: robustly healthy and future ready

The state of WesternU: robustly healthy and future ready

Western University of Health Sciences was built on an audacious vision, and with a new Strategic Plan in place is poised to reach new heights.

“We have sound operations and a broadening reach. We have bright horizons and a wealth of opportunities from which to select here in California and Oregon and elsewhere in the United States and internationally,” Wilson said. “We are blessed with truly talented, loyal and creative people. I have not been in an institution that has such a strong mission-driven culture and close-knit familiarity. It’s very special here.”

The WesternU Board of Trustees approved the strategic plan about seven months ago.

“Since then a robust movement of the plan into the hands of the University community has taken place in a way that is strikingly speedy not just for a university community but even for a corporate community,” Wilson said. “(Faculty and staff) have embraced it so quickly and fully, and that, I have to say, really warms my heart, because this is where the talent and energy of a broad range of people across the University gets mobilized to help author further chapters in our strategic plan with perspective, wisdom, and sometimes interesting ideas.”

The Strategic Performance Group (SPG), made up of more than 100 WesternU faculty and staff, is moving the strategic plan from concept to consequence in five areas: strategy, academics, finance, brand and innovation.

“They are examining and evaluating readiness assessments in a number of key areas, gap analyses, what do we need to put in place to perform better, project charters, action plans and projected outcomes across these five critical areas,” Wilson said.

“How much of what we do really expands our mission?” Wilson said. “We are an educational research and service nonprofit, but if we do things as efficiently as we can, we can have more consequence in the cities that we reside in, and even nationally.”

Wilson wants to invite innovators, inventors and progressive-thinking people to WesternU to help promote their ideas, and in turn help promote the University. WesternU is actively pursuing partnerships with industry and other universities in the innovation arena, including Cal Poly Pomona.

Addressing Pomona Mayor Tim Sandoval, who was in the audience, Wilson said, “I don’t mean to put my good friend the mayor on the spot, but if I were mayor I would try to have a critical mass of university operations flourishing together in downtown Pomona.” Sandoval responded with a hearty, “Yes.”

The master plan for WesternU’s Pomona campus envisions not only the University’s needs but also what can happen in partnership with the city, Cal Poly Pomona, hospitals and other enterprises, Wilson said.

“I think we can build a true university village here,” he said. “I can even imagine over time some of these commercial buildings could be converted into bioscience and biotech startups if we work together and plan.”

Wilson emphasized the importance of bolstering WesternU’s culture of philanthropy. The university needs to build a benefaction engine, which will take years to accomplish, he said.

“We have a wonderful story to tell. We’re not as well known as we can or should be,” Wilson said. “When people hear about WesternU they are amazed, and rightfully so. We have a long way to go. We will ramp this up, and that is vitally important.”

The success of WesternU – Oregon shows that the University must remain nimble and willing to adapt.

“WesternU in Oregon was not in the strategic plan,” Wilson said. “Sensible, sincere, creative parties came together and built an absolutely remarkable ecosystem, again in the WesternU way, out of thin air, or in the case of Lebanon, out of an old field of grass and hay.

“That was an opportunity that was seized and, in retrospect, was a brilliant thing. The success of Oregon makes me believe we have a duty to look for other places where we might expand our mission, whether it’s another campus in the U.S. or perhaps internationally.”

The total economic impact of WesternU, when taking into consideration all its alumni spread throughout the world, is close to $6 billion. “From a boarded-up J.C. Penney 40 years ago — and simply a dream of creating a college of osteopathic medicine through energy, ideas and effort — all of this has been built. Remarkable,” Wilson said.

“We are a very creative community (of) great character, and we are now future-ready for big opportunities,” Wilson said. “We will embody a culture of audacious, nimble innovation that will sustain our future success, and we will do it the WesternU way, with our vision and values intact: caring, respect, empathy, trust, and inclusion.”