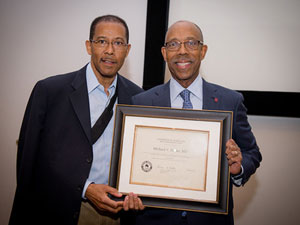 Michael V. Drake, MD, who assumed Ohio State’s presidency in 2014 after nine years as chancellor at the University of California, Irvine, was the featured speaker at the second annual College of Podiatric Medicine’s Dean’s Distinguished Lecture. Drake, whose medical specialty is ophthalmology, had “Higher Education, Health Care, and the Future of America” as his theme.

In higher education, as in medicine, “people really do tell you the truth, for the most part,” Drake said. “In a lot businesses, and especially the higher your level, the less likely you are to hear the truth. People don’t want to upset you. They just agree with whatever you say. So it’s a privilege to be part of something where truth and honesty are a daily part of what we do.

Those qualities earmark medicine and higher ed as “nearly infinitely good things” for society, Drake said, because their objectives – more education and better health — are well-motivated and clear, and depend largely on truth, facts and data, rather than personal preference, misinformation or groupthink. Even so, work remains to ensure both higher education and medical care are accessible, fair and balanced for all who seek them. Drake said one key to meeting those standards is to use data for higher education the way it has started being used for health.

Citing an example from the Yellow Cab Co. – which nearly 40 years ago mounted a third brake light on the trunks of some its cabs to see if using more, and more prominent, rear lights reduced accidents compared to cabs with the standard two brake lights – Drake said medicine has adopted a “reasonable standard” method of determining, through analysis of data culled from diverse patient populations, what standards and practices are most effective and should be implemented broadly. “We now take tons of data on patients and compare it,” he said.

Yellow Cab learned that its three-light cabs were involved in far fewer accidents than the two-light versions, and subsequently equipped its entire fleet with three brake lights. The U.S. auto industry embraced Yellow’s data, and since the mid-1980s has produced (mostly) cars with three brake lights as standard equipment.

“It’s good to take that data and use it to learn how to be better,” Drake said, and it should work the same way for education. Citing personal experience, he said his choice of four-year colleges after high school was not based on data or even on price comparisons, but on whether his options were “good” schools by reputation, had certain programs, high graduation rates, etc. Once in college, he said his class choices were not based on the quality of instructor or class, but on other factors, including what it took to meet graduation requirements and what worked best for his schedule. “A class at 8 a.m., ooh, no,” he said to audience laughter. “How about one at 10, or even better, three in a row for an hour each starting at 10 on Monday, Wednesday, Friday, so I have the rest of those days and Tuesday and Thursday free?”

In hindsight, he said, he might have dug deeper to learn graduation rates (only 9 % of U.S. four-year colleges have a 6-year graduation rate of 70% or better), what credentials instructors in his areas of interest possessed, and what his college’s graduate employment rate was. (“How often did I take a class based on the quality of the instructor? Zero times.”) But his lack of interest in that information was not unique for that time, and is not unique now, Drake said: High school graduates have access to lots of data they can consult to pick the best college fit, but many either don’t know it’s there or don’t use it. “There are lots of programs out there to help people, but they don’t know about them,” Drake said.

To address that disconnect, colleges and universities are taking a different tack. Rather than sending around teacher evaluation forms each terms so students could comment on the quality of instruction, the university started tracking instructional outcomes. How did economics majors who took a certain economics class do in ensuing economics classes? How many opted out of economics altogether? Conversely, how many non-economics majors who took the classes decided to switch to economics because of the class and its instructor? The idea, Drake said, was to gauge the “real, lasting effect of quality of instruction” rather than assessing it via a snapshot in time.

How does that translate to health care? “If we had doctors who we just knew weren’t getting good outcomes, wouldn’t we do something to help people from making a mistake?” he asked.

“It’s a wonderful privilege to be part of both. My hope is that we’ll take the responsibility of that privilege and keep pushing ourselves to do the best we can.”