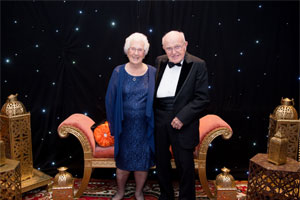 Osteopathic pioneer and WesternU founder Ethan Allen, DO, retires after 65 years in practice

Osteopathic pioneer and WesternU founder Ethan Allen, DO, retires after 65 years in practice

Click to view a slideshow of Ethan Allen, DO

An osteopathic legend has retired.

Ethan Allen, DO, a key figure in the resurrection of California osteopathic medical education in the 1970s, has retired from practice after 65 years. He will continue to serve as Treasurer on the Western University of Health Sciences Board of Trustees, and will also continue to teach WesternU College of Osteopathic Medicine of the Pacific students Osteopathic Manipulative Medicine (OMM) techniques during his volunteer Saturday sessions.

Allen first started in a group practice in 1952 and had been in solo practice since 1985. His health coupled, with the opportunity to sell his practice, led him to retire.

“I have a staff that’s been with me a long time, one of them 20 years, and I’ve seen great meaning in having loyal workers, so it changes their lives, too, when I retire,” Allen said. “The company that bought (my practice) also hired my staff, which was nice.”

One reason he practiced for so long was his commitment to providing Osteopathic Manipulative Treatment (OMT) to his patients.

“For many of my patients, I provide a service that is not abundantly done by other DOs that don’t use the manipulative side of their practice as completely as they should,” Allen said. “I want to make sure we keep the skills so people get the service that they should have.”

Allen’s commitment to preserving and maintaining OMM training will continue with his regular voluntary teaching sessions at COMP. Four times each semester, he teaches a Saturday session for students who want to improve their skills in high velocity-low amplitude technique (HVLA).

“I have some techniques that are slightly different than what is taught in the regular curriculum,” Allen said. “So I frequently have graduates some years later say, ‘I remember your Saturday sessions and I still use those techniques.’”

Allen is a dedicated student educator, a doctor’s doctor, and a fine example of knowledge, compassion, commitment and patient-focused care, said COMP alumnus and Associate Professor David Redding, DO ’93.

“He was my first choice in rotations when I started third year, and it was a great month,” Redding said. “He is a great example of integrating OMT and the rest of medicine into a medical practice. I still look up to him as a fine example of medicine practiced at its best.”

Allen said he will continue to serve on the board of the Los Angeles Centers for Alcohol and Drug Abuse, which he founded with his wife, Alice.

“We have anywhere from 35 to 40 people in treatment for six months to get off their addictions. That is a program that I want to see continue,” Allen said. “It’s a strong program today and has been most rewarding. We feel like we save lives with our treatment program.”

He also wants to write an autobiography. “There are several events in my life I want my kids to know about,” he said.

Allen continues to lead a remarkable life. He graduated from the University of Wyoming in 1943 with an electrical engineering degree and made electric motors for the B-29 airplane for General Electric. He was recruited, along with 30 other young engineers, for the Manhattan Project to develop the atomic bomb. He was drafted into the military in 1944 and trained in the Navy in San Diego and Corpus Christi, Texas. He served in the Navy Air Corps as a radio and radar technician.

He was discharged in 1946 and obtained his DO degree in 1951 from the College of Osteopathic Physicians and Surgeons in Los Angeles. Allen was a pivotal advocate for DOs maintaining their degrees in California when some chose to convert to MDs in the 1960s. He also was a major force in the creation of the College of Osteopathic Medicine of the Pacific, which helped re-establish osteopathic medical education in California, and has served on COMP’s (now WesternU’s) Board of Trustees since its inception in 1977.

“Dr. Allen has had a remarkable career in every respect, notably 65 years as a medical practitioner as well as a superb teacher and model of professionalism to generations of students,” said WesternU President Daniel R. Wilson, MD, PhD. “Ethan is a true gentleman and a fine physician who had a pivotal role in the renewal of the profession in California. Without him, there would be no Western University of Health Sciences.”