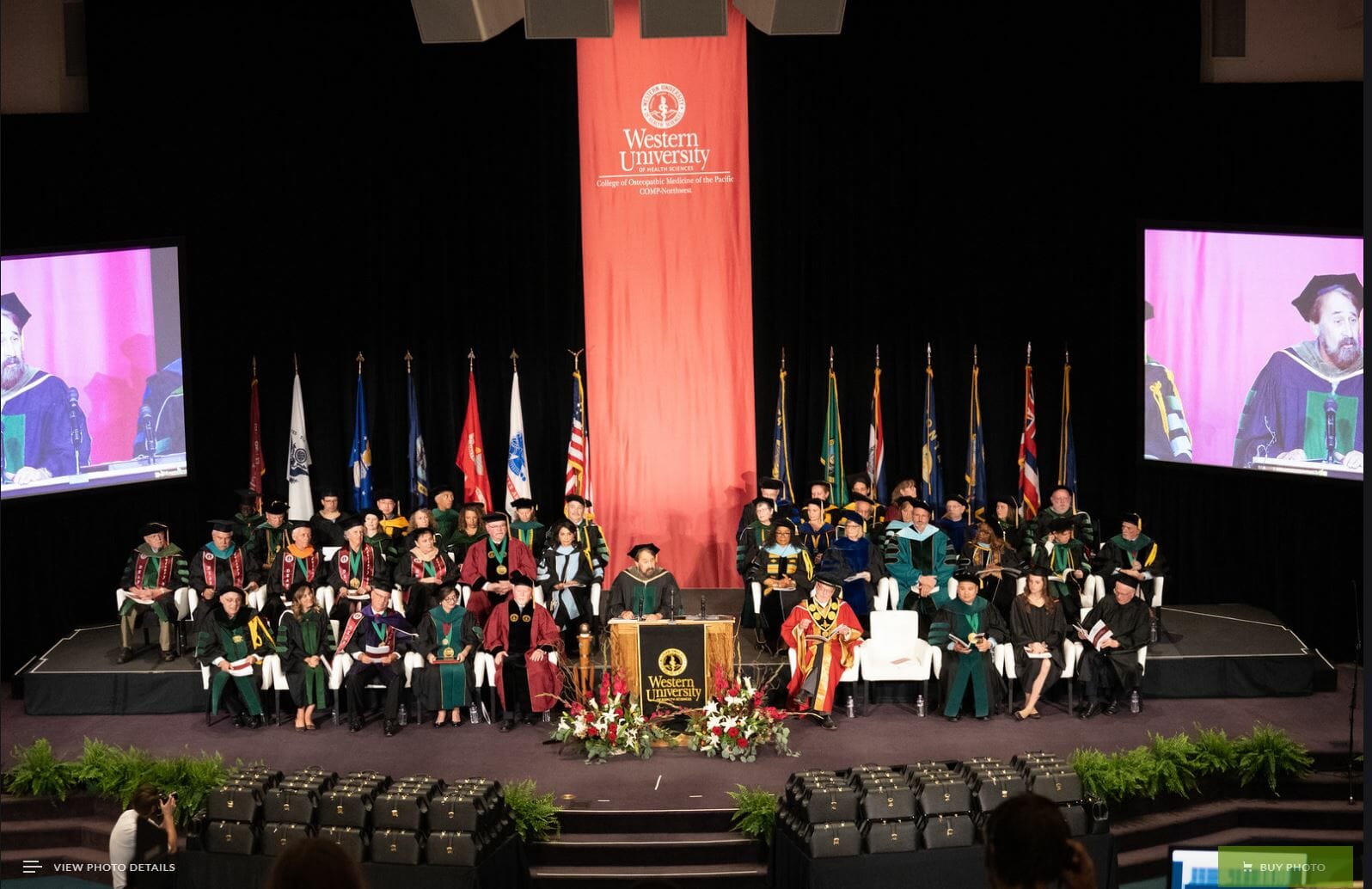 By Michelle Steinhebel  •  3 years ago

The ninth class of osteopathic medical students at Western University of Health Sciences College of Osteopathic Medicine of the Pacific-Northwest marked the start of their health care careers on Friday, Aug. 2, 2019, receiving white coats at the University’s Convocation and White Coat Ceremony.

“I want to assure each and every one of you: We are all in this together,” he said. “A family-like culture has ever been and will forever be a hallmark of WesternU.”

The Oregon campus welcomed 103 students into the Class of 2023. Almost three-quarters of the new class is from the Pacific-Northwest, with 47 of calling Oregon home. The students from Oregon hail from a wide range of communities, from large metropolitan areas such as Portland and Eugene to small towns including Powers, Estacada, and Glide.

Adrienne Koos, from Scio, Oregon, with a population of less than 1,000, is part of the incoming class of medical students.

“It’s great to be back home,” she said. “I feel very welcome here, so it takes some of the stress out of going to medical school.”

Her sentiment was echoed by Jonathan Holland from Powers, Oregon.

“One of the main reasons I chose Lebanon is that being from a small town, I got to know the people I went to school with and all of the members of my community,” Holland said. “It has a family feel here. I loved every second interviewing at the school, and the community and people I’ve had the chance to meet.”

New student Pingting Li looks forward to being back in a small town after living in downtown Chicago the past few years.

“I wanted to make my way back to a small city,” Li said. “Being from a place that has less than 5,000 people in China is actually unique because China has so many people. But I really liked the feeling of knowing everyone.”

She hopes to stay in a small city when she completes her studies. “I want to give back to small town places someday and to help provide health care access.”

The 103 incoming osteopathic medical students were chosen from a field of about 4,200 applicants, said WesternU COMP-Northwest Vice Dean John T. Pham, DO. During the White Coat Ceremony, Pham spoke to the students about the significance of their new white coat.

“Many physicians have worn this coat, and wearing it is a privilege bestowed upon all those who earn a place in the healing arts,” Pham said. “With great privilege also comes great responsibility for to your future patients, to your profession, and to your community. You all represent the glowing flame of the future for osteopathic medicine in Oregon, our nation, and the world.”

Faculty members and close family or friends who are physicians bestow the fresh white coats on incoming students. Incoming student Grant Gerstner had his grandfather, Phillip Gerstner, MD, a retired general surgeon, place his white coat on him. The incoming student calls Keizer, Oregon home and is excited to attend medical school in his home state.

“I’m very excited for today,” Grant Gerstner said. “Everything in my educational career has built up to this moment.”

After receiving their white coats, each student received traditional black doctor bags sponsored by individuals – primarily in the Lebanon community – as part of the Tools of the Trade program. Bags contained notes from their sponsor, wishing them luck on the start of their educational journey.

This year’s Convocation keynote speaker was Michael G. Cowgill, JD. Cowgill is the founding chair of the WesternU COMP-Northwest Dean’s Advisory Board and is president of the Albany law firm Weatherford Thompson. Weatherford Thompson is the oldest law firm in Oregon with continuous family ownership.

The Dean’s Advisory Board was founded before the medical school was even built and had only architectural renderings to examine in the early days. Cowgill gave the medical students a snapshot of the Advisory Board’s accomplishments over the past 10 years, including raising more than $5 million in less than five years when the medical school opened. The board also helped fund WesternU Health – Oliver Station in Portland’s Lents Neighborhood, which opened earlier this year; the WesternU COMP-Northwest Medical Anatomy Center; and the Bryan Leadership Institute.

Cowgill is from Lebanon and graduated from its high school in 1971. He went on to earn his bachelor’s degree

from Oregon State University, and his Juris Doctorate degree from the University of Oregon Law School in 1978, but his roots to Lebanon remain strong.

“I grew up on a family farm on Tennessee Road. It’s about two miles northeast of the medical school,” Cowgill said. “My 40 years here in Lebanon were some of the best years in my life. I have a true appreciation for what’s happened here, and how COMP-Northwest has led to regenerate this community in a relatively short time period.”

His roots in Lebanon, and Oregon as a whole, have led Cowgill to continue to lead the Dean’s Advisory Board.

“I’m excited for all of you,” he said. “Study hard. Go forth and change the world. I know all of you will be successful, so let your journey begin.”