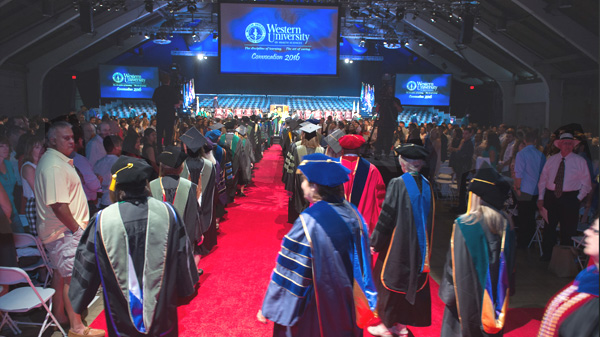 By Rodney Tanaka and Jeff Keating  •  6 years ago

Wilson started work on July 1 as the permanent successor to Dr. Philip Pumerantz, who founded the College of Osteopathic Medicine of the Pacific (COMP) in 1977, and retired in September 2015. COMP was reorganized into Western University of Health Sciences in 1996. Dr. Wilson also presided over the Convocation and white coat ceremony for COMP-Northwest in Lebanon, Oregon July 29, 2016.

After a short video introduction separate from the main Convocation video, and following the initial faculty and administration processional, Wilson, his wife Sandy, and their daughter, Victoria, entered the Convocation hall and greeted Dr. Pumerantz and his wife, Harriet. Wilson then opened and presided over the main ceremony, identifying himself and his wife, Sandy, as “new matriculants” along with the incoming class. Sandy Wilson also briefly welcomed the students and their families, reminding them that “We’re all in this together.”

Bruce Chernof, MD, FACP, president and chief executive officer of the Senior Care Action Network (SCAN), provided the keynote address at the Pomona Convocation ceremony. He welcomed WesternU’s new students “into a wonderful professional future, into a life that has given me so much. Each of you has worked incredibly hard for this day. In being here today, we celebrate all that you have done, and all that you will do, to bring life, health, and dignity to all.”

Chernof, whose Los Angeles-based organization advocates for a coordinated and easily navigable system of care services to help older adults maintain independence, said that despite its massive, and expensive, health care system, the United States lags behind many other countries in health outcomes because it remains focused on diseases rather than on “whole person” care. Fortunately, he said, “There is a growing understanding among health sciences professionals of all sorts that we need to focus on health, and not just health care.”

WesternU is at the vanguard of this movement because of its longstanding commitment to humanism, to helping entire communities achieve access and equity in health education and care, and to an interdisciplinary philosophy that fosters a “team” approach to health and wellness, Chernof said.

“For almost 30 years, I’ve been trying to answer the same questions … How do we make lives better for the most vulnerable among us? How do we use our precious resources more effectively? And how do we create the next generation of leaders? You are all part of the answer to that last question.”

New students had high praise for the faculty they met during Welcome Week. First-year College of Allied Health Professions student Marissa Huma, DPT ’19, said everyone she has met has been very inviting.

“It’s a school, but it does feel more like a family,” she said. “I’m coming to a school where faculty are learning your name. They want to get to know you and they care about you.” 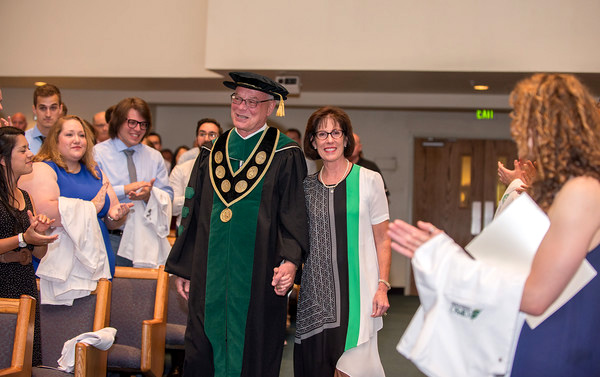 Alissa Craft, DO, MBA, vice president of accreditation for the American Osteopathic Association, and formerly COMP-Northwest’s vice chair of pediatrics and director of curricular outcomes, served as the keynote speaker for COMP-Northwest’s Convocation ceremony.

Likening the duties of a physician to those of a golf caddie, Craft encouraged the Class of 2020 to “keep your eye on the ball” and to not be afraid to lean on the faculty and administrators who have experienced what they are about to go through as students and, eventually, professionals. These “caddies” know how to play osteopathic medicine’s course, and how to avoid its accompanying hazards and traps, she said.

“Let me introduce you to the uniform of the caddie – these caps and gowns, but also scrubs, and white coats. Beginning today, the people who wear those uniforms, sitting on this stage, are your caddies. We are here to help you navigate the longest round of golf you will ever play – your career in osteopathic medicine.”

Following Convocation, new students in each of WesternU’s nine health professions colleges attended separate ceremonies where they were cloaked with the short white coats that acknowledge and emphasize their commitment to scientific excellence, compassion, and caring.

First-year College of Podiatric Medicine student Karanjot Kaur, DPM ’20, said donning her white coat for the first time meant a lot to her.

“For a long time I didn’t know if I would make it in the path I had chosen,” Kaur said. “It took awhile. But it’s a dream come true and a very touching moment for my parents. Hopefully I will fulfill the responsibilities that come with my white coat. I’m very thankful, humble and grateful for everything.”

In addition to their white coats, COMP-Northwest students received their first medical bags, a tradition started by the Lebanon Chamber of Commerce and the community, and now sustained by Osteopathic Physicians and Surgeons of Oregon.

First-year COMP-Northwest student Ali Abu-Alya and his 5-year-old son, Amir, worked together to open his new medical bag after the ceremony. Amir wore a matching white coat in honor of his dad. Abu-Alya said he loved the Convocation ceremony.

“I learned a lot about what it means to be here and my role in the future,” he said.

Abu-Alya said he loves COMP-Northwest’s family environment and knows the next four years will be tiring, challenging and stressful, but worth it. His son had a positive outlook on his future.