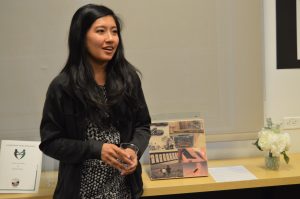 Elysia Chin, DO ’17, presents her LC3 capstone project reflecting on the four years she spent with Sherryl, her LC3 patient. (Thomas A. Fox, WesternU).

It started with Oreos.

College of Osteopathic Medicine of the Pacific graduate Elysia Chin, DO ’17, was paired with a WesternU Western Diabetes Institute (WDI) patient as part of COMP’s Longitudinal Chronic Care Course (LC3). Chin spent four years with Sherryl, who was diagnosed with diabetes and had many other health issues. The first time Chin visited Sherryl at her assisted living facility in Claremont, Sherryl broke out a bag of double-stuffed Oreos.

“I told her, ‘Sherryl, you’re not supposed to have that at the dining table,’” Chin said. “She sneaks me a couple and she says, ‘Well, since I can’t have them then I guess you can have them.’ She’s always been a little mischievous that way.”

Sherryl had suffered a stroke 10 years prior, had coronary artery disease and had suffered a pulmonary embolism. In her first year in the LC3 program, Chin would visit Sherryl every week, have a meal with her and check her blood pressure.

“With a patient dealing with so many chronic issues, it’s easy to feel down and discouraged,” Chin said. “It’s important to start with small goals that could be accomplished. She would show me her plate and tell me, ‘I made a good choice today. I chose wheat toast instead of the dinner roll.’ She knew what the right decision was. She just wanted incentive to do them.

“The real strength in our relationship was not necessarily working on health goals. We were able to be companions,” Chin added. “A lot of the time when we talked, it had very little to do with health care and more to do with her mood, talking about things that made her laugh and made her spunky personality come out. That offered her more encouragement and more indirect help with her health because her spirits were better.”

The LC3 program pairs COMP students with a patient for all four years of the students’ schooling.

“This program is centered around pairing a student with an individual patient that is living with a chronic disease with the goal of gaining the patient’s perspective of living with that disease and also giving them an environment to begin communicating with patients, sharing in their individual patient’s view of what type of health care they would like to see, and also serving as a health care coach to improve their overall care,” said COMP Assistant Dean of Longitudinal and Experiential Learning Edward Barnes, MD, FACP.

The COMP Class of 2017 was the first class to complete the four-year LC3 program.

“They are very near and dear to my heart because I’ve seen them grow, and they’ve also helped LC3 grow,” Barnes said. “They took the risk on a pilot program that had no real foundation at the time and they helped build it into the success that it has become today. 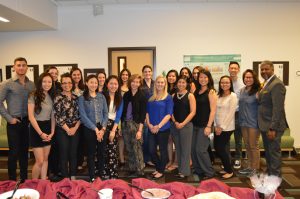 COMP Class of 2017 students were the first to join the four-year LC3 program. (Thomas A. Fox, WesternU)

The LC3 program is now one of a growing number of Longitudinal Track Programs on COMP’s two campuses in Pomona, California and Lebanon, Oregon. COMP also offers the Lifestyle Medicine Track, the Global and Community Health Track and the Rural Health Track. Other tracks are in development or just starting, such as the Applied Anatomy Track.

“With the introduction of the Longitudinal Tracks Program, we immerse them into the community very early in their training, and with that immersion they get experiences with patients, they get experiences with different communities, they get experiences in kitchens. We found that by making them eager about their general interest, it’s really benefited their performance in the classroom,” Barnes said. “We’ve also found that they are able to retain empathy a little bit better, because when you’re in a classroom environment, you’re not always ready to then flip a switch and start speaking to patients by the time you hit your third year of training. So it’s important our students are out there engaging, interacting and practicing a lot of the skills they’re learning in the classroom.”

COMP graduate Serena Shen, DO ’17, was paired with a WDI patient who has lived with type 1 diabetes most of her life. Her patient could not always afford to buy insulin. She juggled a couple of jobs. They would text each other weekly, and Shen would ask about her diet and sugar levels.

“She was very open with me. She was a very friendly person,” Shen said. “We did talk about her, what’s going on with her life, the struggles she was facing. We also talked about my life. I was trying to get to know her better as she got to know me better.”

Shen joined LC3 because she wanted to know more about her patients than just their medical condition.

“With LC3 you get the opportunity to get to know a patient really well. Medicine is only a tiny part of their life,” she said. “They have a lot of other stuff to deal with. I think it’s a really cool program. It’s like gaining another friend.”

Sometimes her patient’s insurance wouldn’t go through. She would miss appointments or medication. But she’s pulled herself together and is in a positive place, Shen said.

“So many times we just see patients maybe 10 to 15 minutes during an appointment. You can make small talk, but you’re not actually getting to know them,” Shen said. “With the LC3 program, you really get to know a patient and understand the trouble they go through with a chronic disease like diabetes, and the practical aspects of how to work with the disease.” 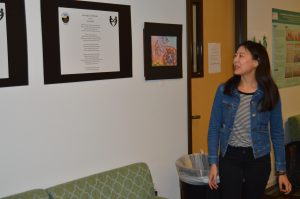 The Longitudinal Tracks are voluntary, extracurricular programs for COMP students. They give their free time to meet with patients, teach cooking classes and travel overseas to provide care to underserved communities.

“They come in on evenings, Saturdays and their lunch time,” Barnes said. “We spend a lot of time together really trying to grow experiences. When we started the Longitudinal Tracks programs, we had about 30 students enrolled that first year and now we have upwards of 350 students on both campuses enrolled. Each year we have to turn a significant number of students away as we grow the number of programs we have.

“So for the future we’re looking toward growing programs in the areas of military medicine. We’re also looking to add programs in biomedical/clinical research. Finally we’re looking at health care leadership as a possibility, too,” Barnes said. “And these ideas really come from the students and what they’re eager to learn more about. And the beauty of it is they help us build each and every one of these Longitudinal Tracks Programs so they put their own personal touch on them.”

Sherryl was diagnosed with glioblastoma in August 2016. She moved in with her daughter and granddaughter for hospice care, and her family decided not to have any rules anymore.

“There were no restrictions on what she could and couldn’t eat, so I brought a pack of Oreos for her,” said Chin, who visited Sherryl every week until her death a month later.

“It was an extremely humbling experience. I felt honored and really overwhelmed. Her family was so open to me being there and being part of such intimate discussions and encounters,” she said. “I’m more grateful to Sherryl. She allowed me to be there with her in the end. I hope I was able to bring her some happiness and great conversations and laughter.”

“Every time I saw her during her month in hospice we made sure to talk about everything fun. We reminisced about our old memories and little inside jokes. She told me about her favorite things and her upbringing,” Chin said. “That month was just a celebration of her life. She helped me to see death doesn’t have to be so grim. It could be a celebration of someone’s life, all they have gone through and endured, the happy and bad times.”

Chin graduated in May 2017 and is in the first year of a family medicine residency at Loma Linda University Medical Center in Loma Linda, California.

“I would say this experience definitely cemented my decision to go into family medicine and primary care,” Chin said. “Because of the type of relationship I built with Sherryl, that’s what I want with every single patient going forward. I know it’s not always going to be the case, but I’m still a bright-eyed, bushy-tailed, fresh graduate and I hope I never lose that. I definitely want to be able to develop these types of relationships with my patients and their families and their loved ones, because I think a powerful way to get people to care about their own health is if you show you actually care about them on all levels.”