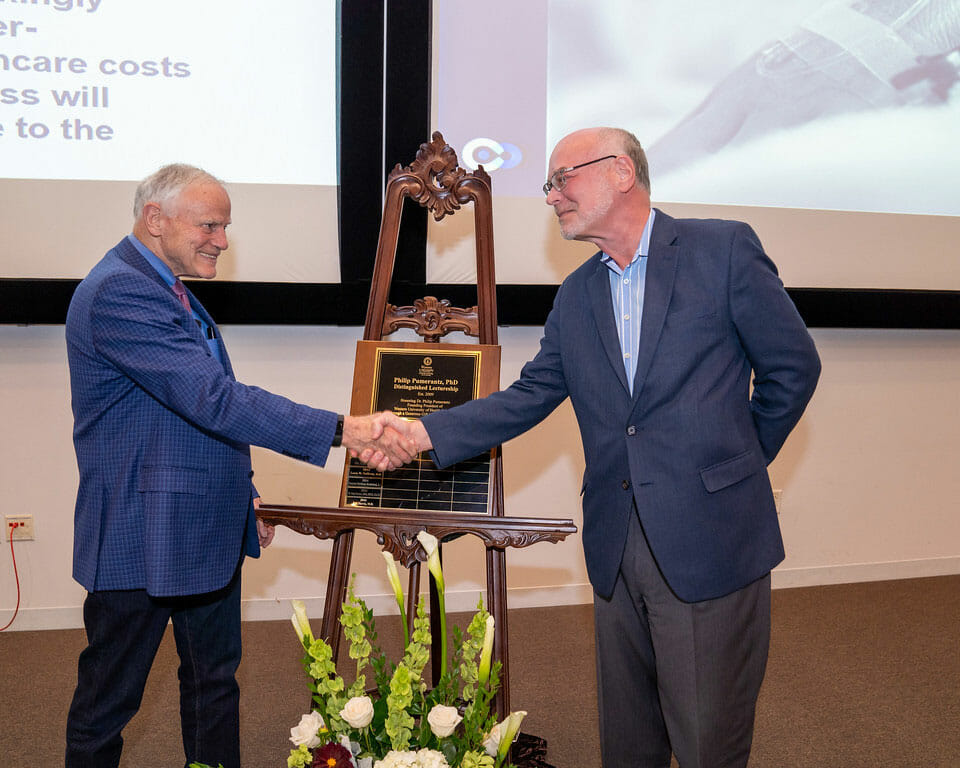 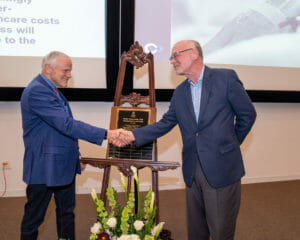 The future of medicine in the 21st century will focus on wellness, mapped and tracked down to the genetic level, resulting in people living longer, healthier lives. But it will be up to each individual to make healthy choices and maximize their extra time on earth.

Hood participated in seven paradigm changes in biology that set the foundation for modern molecular biology, including the development of the automated DNA sequencer. He played a significant role in the Human Genome Project, an international effort to map and understand all the genes of human beings. He co-founded the Institute for Systems Biology in 2000.

“Systems biology is this fascinating idea that when you look at biological complexity and study it, you can’t do it one gene or one protein at a time,” Hood said. “You have to think about it in terms of the systems that operate in the biological organism and how you can assess whole systems and not just whole genes.”

Hood and his collaborators pioneered techniques in systems approaches to biology and disease. He developed systems medicine as the fundamental tool for dealing with the complexity of pathology and the idea that health care should be predictive, personalized preventative and participatory (P4 medicine).

In the past 100 years, medicine underwent two big paradigm changes. The Flexner Report, published in 1910, reviewed medical education in the U.S. and Canada and found much of it to be abysmal. As a result, many medical schools closed and the profession turned to science to train physicians and treat patients, Hood said. The sciences in the 20th century created medicine that focused on identifying and fixing disease but ignored wellness, he said.

The next paradigm change is happening now, with a more global approach toward the complexity of disease. P4 medicine is strikingly different from contemporary medicine in almost every way, Hood said. It is proactive, not reactive, and is all about the individual.

“Everyone is going to be uniquely treated and uniquely assessed,” Hood said. “It’s really about understanding wellness, understanding disease, and understanding the transitions between the two so you can reverse them immediately.”

What systems biology gave systems medicine was two important intellectual concepts. One is dense phenotyping, where billions of measurements are taken on an individual to provide a key to understanding that person’s wellness and disease, and the transitions between the two. The second realization is that complex biological systems operate by virtue of biological networks that are interactions of proteins and other informational molecules that are the mediators of development, of physiological responses and of aging, and if they become disease-perturbed, they cause disease.

“If you can see how a disease-perturbed network differs from its normal counterpart, you get deep and fundamental insights into how to create biomarkers that can detect the disease or drug targets that might be able to cure the disease,” Hood said. “The networks can be derived from the dense phenotyping measurements that you make. So the two are beautifully interrelated.”

This P4 approach can change how clinical trials are performed, Hood said. The fundamental assumption made in all trials is each of the individual units (humans) are identical. But we are not identical. We are different genetically and environmentally, he said.

“We think that clinical trials in the future ought to be done as N-of-1 (single subject) experiments,” Hood said. “In a cancer trial we can use the individual data clouds to actually identify biomarkers that distinguish the responders from the non-responders. Then what we will do is a second trial of 50 patients with all responders. And if you get a 98 percent response rate, the FDA will approve your drug in the blink of an eye. You go from spending $1.5 billion on a clinical trial to spending hundreds of thousands of dollars on a clinical trial.”

Hood and his collaborators completed a study that used dynamic data clouds to improve wellness. “A wellness study of 108 individuals using personal, dense, dynamic data clouds,” published in Nature Biotechnology in 2017, involved collecting the complete genome sequences of 108 volunteers, including Hood. The subjects each gave blood draws every three months to measure 1,200 analytes of three classes: clinical chemistries, metabolites and proteins. They measured gut microbiome every three months and used Fitbit and other devices for digital health measurements.

“What these gave us for each individual was longitudinal data clouds that, when analyzed, led to actionable possibilities that if executed by the individual could either improve their wellness and/or let them ameliorate or avoid disease,” Hood said. “The big question in all of this is: How do you change social behavior? What we used were wellness coaches, trained in psychology and nutrition and nursing, who were magnificent. They would elicit from the individual exactly what they wanted in their health objectives, and this is not easy to do.”

Hood said he has a “gruesome family history of cardiovascular disease, diabetes and Alzheimer’s. Those are things you want to be aware of as you’re optimizing your wellness. I lost weight really easily by looking at my genetics and seeing how optimally I can eat to lose weight without really dieting.

“I changed my exercise regiment,” Hood added. “You can look at your genes and see how to optimize your energy output. You can use continuous glucose monitoring to experiment with different foods and what they do to your glucose level.”

His participation led to one realization.

“Wellness or health is all about you,” Hood said. “That participatory piece is really critical.”

Those who participate in scientific wellness and have data prior to the diagnosis of any disease can have that data used as a baseline, allowing health care practitioners to detect early transition points from analytes, disease-perturbed networks, and other factors, Hood said.

“I would say in a five-year period, we will have the diagnostic earliest markers for virtually all of the major chronic diseases, and we will be well on the way to using those markers to determine what therapeutic targets we can hit at that earliest transition point,” Hood said. “It’s going to be an extreme form of preventive medicine in the 21st century. This changes us to this new N-of-one approach to disease, where your wellness is specified by your early parameters. We will see your transitions and we will be able to see the increase in networks, and we will look for the therapies that can reverse the earliest kinds of transitions.”

In 2007, for the first time, half the children born can expect to live to be 100, Hood said. This generation will have to go through a series of job transitions as they age so they have enough money in their later years.

“I think what the 21st century will give you is the ability to age really well, and to be well,” Hood said. “Also, the ability to see early transitions to disease and reverse them. This is going to staggeringly reduce the cost of health care.

“Alzheimer’s costs us half a trillion dollars a year today,” Hood added. “Suppose in five years we’ve reduced it to 10 percent of what we have now. You’re talking about hundreds of billions of dollars in savings.”

“As we migrate to wellness, we’re going to migrate from big hospitals, with complicated buildings, to the home,” Hood said. “We are going to have a tricorder in 10 or 15 years that can prick your thumb and make 5,000 measurements on a drop of blood, send that information to an analytics center, and they will send it to your coach and to your physician. You will get everything done at home easily, checking it once a month or two months.

“The really important point is you are going to have a chance, all of you, to live a lot longer,” Hood said. “Take advantage of it.”

The lectureship, in honor of WesternU Founding President Philip Pumerantz, PhD, is made possible by a gracious donation from the Sarkaria family of Orange, California.