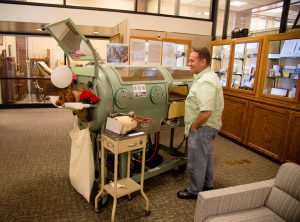 The Southern California Medical Museum invites you to travel back in time to when polio patients were encased in 500-pound iron lungs to survive – a time before vaccines eradicated many preventable diseases.

The museum, housed in Western University of Health Sciences’ Nursing Science Center, acquired an iron lung through the generosity of Rancho Los Amigos Medical Center in Downey, California. The Drinker-Collins iron lung was used in the 1950s for treating adolescents and, later, was rented out for television and movies, said museum Director Bert “Hans” Davidson, MD, PhD.

The cumbersome mechanical respirator reminds modern-day museum visitors about the ways physicians commonly treated patients with paralyzing diseases like polio starting in the mid-1920s. Rows of iron lungs filled hospital wards at the height of the polio outbreaks of the 1940s and 1950s, helping children and adults with polio. Some polio patients with paralysis up to the chest spent various lengths of time inside the iron lung, an airtight metal chamber that forced air into patients’ lungs using negative pressure.

In most cases, patients would not be in an iron lung for more than two or three weeks. But some were badly affected and never recovered. Guinness World Records cites June Middleton of Melbourne, Victoria, Australia as the longest iron lung patient. She contracted polio in April 1949 and relied on an iron lung to keep her alive for more than 60 years. http://www.guinnessworldrecords.com/world-records/longest-iron-lung-patient.

The development of modern ventilators and polio vaccination programs rendered the iron lung mostly obsolete, and polio is almost completely eradicated. In 1959, there were 1,200 people using the lung in the United States, but by 2004 there were only 39, according to the National Museum of American History.

Dr. Jonas Salk developed the first polio vaccine in 1955. Between 1955 and 1957, incidences of polio in the U.S. fell by 85 to 90 percent, according to the National Museum of American History.

“We are excited to showcase this spectacular vintage machine. It’s a prime example of the advances that have been made in modern medicine. Our iron lung is a fascinating peek into history,” Davidson said. “But, more important, it is a reminder how infectious disease could ravage the population and the danger of the current opposition to vaccination by some people unencumbered by knowledge or insight. Diseases like polio could return with devastating consequences.”

Advanced reservations are required to visit the Southern California Medical Museum. To schedule your tour or inquire about dates and availability, please contact Debbie Long at dlong@sbcms.org or 909-273-6000. The Nursing Science Center is at 350 S. Garey Ave., Pomona, Calif. For more information, visit the Southern California Medical Museum website at http://www.socalmedicalmuseum.org/