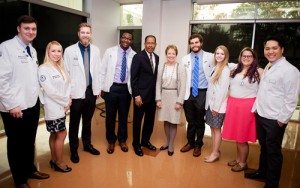 Julie A. Freischlag, MD, has lived a life filled with accomplishments and unexpected turns. She encouraged others to find their own path, become leaders and make their mark on those they meet during her keynote address at the inaugural Western University of Health Sciences College of Podiatric Medicine Lawrence B. Harkless Dean’s Distinguished Lecture March 3, 2016 in Pomona, California.

Freischlag is Vice Chancellor for Human Health Sciences and Dean of the UC Davis School of Medicine. She oversees UC Davis Health System’s academic, research and clinical programs, including the School of Medicine, the Betty Irene Moore School of Nursing, the 1,000-member physician practice group, and UC Davis Medical Center.

She has served as a vascular surgeon and chair at some of the most prestigious medical schools in the country, but she comes from humble beginnings. One grandfather was a coal miner and the other built boilers for the railroad. Her grandfather told her that she could do anything she wanted, regardless of what others might say. She then passed on this advice to those in attendance.

After completing her bachelor’s degree at the University of Illinois, she was accepted to Rush University Medical College in Chicago. She wanted to be a pediatrician until her first surgery rotation in her third year.

“I walked into my first operating room, rotating on orthopedic surgery, and my world changed,” she said. “I was really good at surgery. I could operate. I had great hand-eye (coordination). I loved everything about it.”

She completed her surgical residency and vascular fellowship at the David Geffen School of Medicine at UCLA. During this time she also became more familiar with podiatric medicine. The first podiatry resident she worked with told her he became a podiatrist because he used to go to the podiatrist with his mother. The podiatrist made his mother feel so good and so comforted.

“Her feet didn’t hurt. She worked as a waitress,” Freischlag said. “He was so impressed.”

She then went to UC San Diego for her first job and worked with her first professional partner, Dr. Bob Hye, who died last week. Hye taught her a valuable lesson early in their practice. His daughter had an ear infection and needed to have it lanced in the emergency room. Hye was in the middle of a case, and he asked Freischlag to finish it for him while he helped care for his daughter.

“He was one of the best people in the world. He taught me for these 29 years what a first partner is like, what a best friend is like,” she added. “So tonight this is all for Bob. He really made me understand priorities and made me a better surgeon.”

Her professional career and personal life took many turns. She went to Milwaukee, then returned to UCLA, then went to Johns Hopkins Medical Institutions. She got divorced, remarried, and had a son through in vitro fertilization.

There are two things that make a great leader, partner, or friend, she said.

“You have to have your people’s back, your friend, colleague, patient, everyone’s back. And  you have to make people a little better,” Freischlag said. “When you leave, you want them to be able to say what you made a little better. Also, make sure when you leave an institution, they have a party for you before you leave rather than after you’re gone.”

She recommended reading the book “Drive: The Surprising Truth About What Motivates Us,” by Daniel H. Pink.

“The happiest physician you’ll ever be is a passionate one who knows why you come to work every day,” she said. “He also talks about your sentence. As you go through school and you are in your position, you need to know what your sentence is. If you go around and yell at people and pound on desks, your sentence isn’t going to be a good one.”

She decided to leave Johns Hopkins when she started reviewing the strategic plan and realized her division chiefs could do a great job without her. Eight of them had already left to become chairs at other institutions.

“I needed to do something bigger. I wanted to help health systems. Even though people say we have a system that is broken and it’s not good, I’ll tell you, our system works better for more people than in many countries,” she said. “Many countries have decided that health system delivery is not a right, it’s a privilege. And in many countries the poor get no care. We’re really trying to get care for everyone.”

She now works at UC Davis, which serves a diverse population in Northern California. It is important to recognize diversity, she said.

“I have seen surgery become much more diverse. I have not seen leadership become diverse,” Freischlag said. “All of you need to lead something, whether it’s an office, your lab, or your parent group. We need you to lead across differences. You need to help us make diversity just what we do – not a program, not something we manage. It’s a competency that you need to learn. I know for a fact that diverse populations do a better job and make better decisions. The more diverse the team, the better decision you’ll make.”