CVM veterinarians provide valuable services for the pets of the homeless

By William Reinhard  •  1 month ago

CVM veterinarians provide valuable services for the pets of the homeless 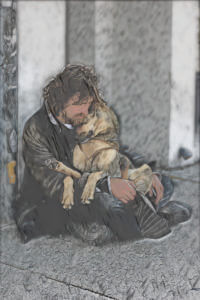 Homeless man bonds with his dog.

Dr. Gabe Rosa bends down to meet her next patient and the patient’s owner. The small terrier appears a bit frightened, but submits willingly to the examination.

“How have you been doing, Princess?” Dr. Rosa says, as she gently checks the dog for signs of illness or distress. It is a warm day at the end of June, with the Fourth of July just around the corner.

“She’s been getting scared of the fireworks at night,” the dog’s owner said. “And she’s been hot. She used to go through three bowls of water a day. Now she’s going through six.”

Dr. Rosa, DVM 2015, of the Ellevet Project, is conducting her work as she would if she were in a clinic, save for the more limited array of medications and other tools at her disposal. She is performing street medicine, examining the pets of homeless individuals. This particular exam is taking place at Hope for Home, a shelter in Pomona.

Dr. Rosa began performing street medicine with Ellevet last year, and during spring and summer served as the program’s head veterinarian, traveling to shelters and encampments throughout California to examine and assist those who cannot afford to bring their pets to a clinic at regular intervals. 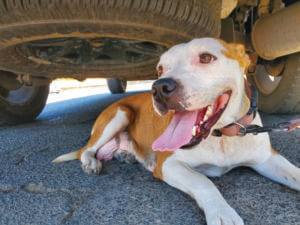 A dog finds a cool place under a car as he awaits his examination at a California homeless encampment.

Street medicine for the pets of economically disadvantaged owners is a relatively new concept, with initial outreach programs launching more than a decade years ago. The American Veterinary Medical Association began recognizing the issue a few years later, and in 2018 held a pop- up clinic in Denver to coincide with its convention.

Dr. Clyde Sharikova-Sudarma, DVM 2018, began working as a street veterinarian earlier this year for the Elica Health Centers in Sacramento. He’s part of a mobile outreach team that travels to shelters and encampments, stopping at any point in between to help homeless people with their pets.

“At first the individuals at the stops hesitated to come forward with their pets,” he said. “They assumed we were authority coming to take away what belonged to them. After the reason for our being there is clarified, they’d ask if they’d have to pay for services, but are delighted when we tell them that there is no change.”

The message to the clients is simple. “‘We aren’t providing an entire clinic or hospital, but what we have, you can have.’ Once one comes out from their tent and works with us, more gather,” he said. 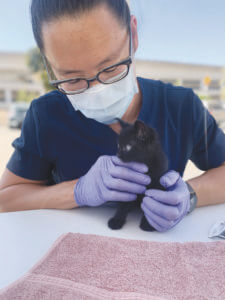 Dr. Clyde Sharakova-Sudarma examines a kitten on a recent trip to a homeless encampment.

Pets come with people and “by connecting with people and their pets, you also have a way to connect to the person,” Dr. Sharikova-Sudarma said. “So we have the opportunity to let them know that (his organization’s, Elica Health Centers) medical team goes out throughout the week, and that the team can follow up with the needs of the owners.”

Homelessness is not a new issue. The term first appeared in the US more than 150 years ago, and was used to describe itinerant workers who took to the road in search of employment in the late 19th century. The problem began to explode in the 1980s, and some scholars point to the deinstitutionalization of the mentally ill as a major contributing factor.

“We know that, for some of the homeless, their animals have prevented them from committing suicide,” Ms. Frederick said. “The animals provide comfort and unconditional love. They are non-judgmental.”

Ms. Frederick first noticed that some homeless individuals had pets while on a trip to New York City in the early 2000s. Until that point, she said, “I was one of those people who walked down the street with blinders on.”

Oblivious no more, she researched the issue, reached out to homeless advocates and agencies, and in 2008 launched Pets of the Homeless. It began modestly, as a way to gather donated pet food for food banks. By 2020, it had grown to a national network of wellness clinics and donated pet medical services, and nearly 17,000 pets have been served by the organization’s wellness clinics over the years.

Ellevet Sciences, a developer and manufacturer of CBD-based products for dogs and cats, also recognized the growing need for services for the pets of the homeless. Amanda Howland, co-founder of the company, spent more than two months last year traveling to homeless shelters and encampments in California with the Humane Society and volunteer veterinarians to serve animals and get a ground-level view of the issue.

“We always knew we wanted to give back to the community when we started Ellevet,” Ms. Howland said. “We totally guessed on the amount of supplies we needed and hit the road.”

“We always knew we wanted to give back to the community when we started Ellevet,” Ms. Howland said. “We totally guessed on the amount of supplies we needed and hit the road.”

The need for the services became immediately apparent. The onset of the pandemic meant that some service options that used to be available to low- income individuals had dried up, at least temporarily. The Ellevet Project was launched as a stand-alone nonprofit organization by the company, working with the homeless population in California.

At this point, the Ellevet Project is operating only in the Golden State, but Ms. Howland knows the need is everywhere. “Our goal is to expand the program nationwide,” she said.

Ms. Howland said she is hopeful that more current students and graduating veterinarians become interested in serving the homeless. “It is so important to energize veterinary students in this issue,” she said. “We want them to gain an awareness of homelessness, and join us in giving back to the community.”

Dr. Rosa helped mentor a WesternU student this past summer. Simon Ettenger, DVM 2024, worked with Dr. Rosa at a number of Southern California clinics. Ettenger had worked in other clinics in the past that served unhoused individuals and their pets, making his work with Ellevet a natural extension. 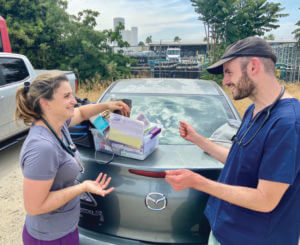 “Those were always the clients who were most grateful for what we were doing, and certainly the most satisfying to work with,” Ettenger said of his previous experience working with low-income pet owners. “The bond between those clients and their pets is so obvious and so important.”

Dr. Sharikova-Sudarma finds similar satisfaction in working with the homeless population. “When a vet comes into the life of a homeless person and says, ‘This is for you; I am here for you,’ that person is just thankful,” he said. “That’s what I’m here for. I’m not here to start a business or see how much money or fame I can get.”

The move to street medicine came after Dr. Sharikova-Sudarma felt burnt out by traditional clinical medicine. He was working more than 40 hours a week, and believed his work pace was not sustainable, especially with the hope of settling down and starting a family. He now only works part-time for Elica Health Centers.

“Financially, I know, this is not a solution for student debt. And practice- wise, I’m sure people have higher hopes. But this could be a good supplementary position,” Dr. Sharikova-Sudarma said. “We’re financially stable enough, and I believe this supports my relationship with my wife and the community, so it works out.”

Dr. Rosa has found the move to street medicine to be a good match for her lifestyle. She had done a research project on the effects of CBD products on pets while at WesternU, so when the position with the Ellevet Project became available, a classmate suggested she apply.

“There was an instant connection, for me,” Dr. Rosa said.

Dr. Rosa also had spent several years in a clinical setting, but always had a desire to give back to the community.

“Unfortunately, there is a big need for this service,” she said.

One place she’s returned to several times is Skid Row, the neighborhood in central Los Angeles with one of the largest stable populations of homeless in the nation. The area has been known for its steady homeless population since the 1930s – nearly a century.

“The residents of Skid Row were there prior to the pandemic, but once the pandemic hit, their issues increased,” Dr. Rosa noted. “From my experiences last year to my experiences this year, the disparity and the poverty we were seeing has increased 100-fold. It was unbelievable; you wouldn’t expect that.” 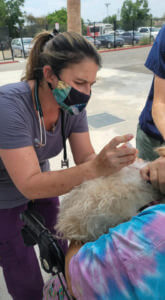 Dr. Rosa administers medication to a pet of a homeless person.

Ms. Frederick agrees that the need for services continues to grow.

While there may be a greater need for services, veterinarians working with the homeless note that most of the pets they see are well treated and do not suffer from chronic health issues. The most common: dental and dermatological problems

“I had expected to see a larger population of troubled pets, but I actually see mostly generally healthy pets,” said Dr. Sharikova-Sudarma. “With the limited involvement, my aim is to help make little changes each time to encourage better lives.”

Likewise, Dr. Rosa has been surprised and pleased by the health of most of the animals she sees in her work. While interacting with clients, she offers health-improving—and potentially money-saving—tips, such as spay and neutering advice or dental strategies.

At the shelter, a client asks how to entice her dog into consuming medicine.

“Is there anything that she really likes that you can sneak it inside? Maybe some cheese?,” suggests Dr. Rosa.

The client responds that her fellow residents at the shelter always give the dog chicken, and Dr. Rosa has already cautioned her that too much poultry may not be such a good thing.

“Sometimes we get bacon; we can try bacon,” the client says.

Again, Dr. Rosa thinks there may be a better way. “I think there’s got to be some cheese around here that might work best,” she said.

“I do get cheese in my sandwiches every day; maybe I can try that.”

Dr. Rosa smiles and nods. The client, armed with a new strategy, moves along with her dog in tow.

“What’s the lesson here, Simon?” Dr. Rosa asks her young colleague. “Always be prepared,” says Ettenger, as he packs up some of the supplies.

“Simon has been great working with us,” Dr. Rosa adds. “He just kind of jumped right in and helped out. Simon is going to be a very good vet someday.”

“It is sad form me to say just how much this help is actually needed,” she said.  “It says a lot about just how poor our poor people really are. The poverty and the disparities are evident.” 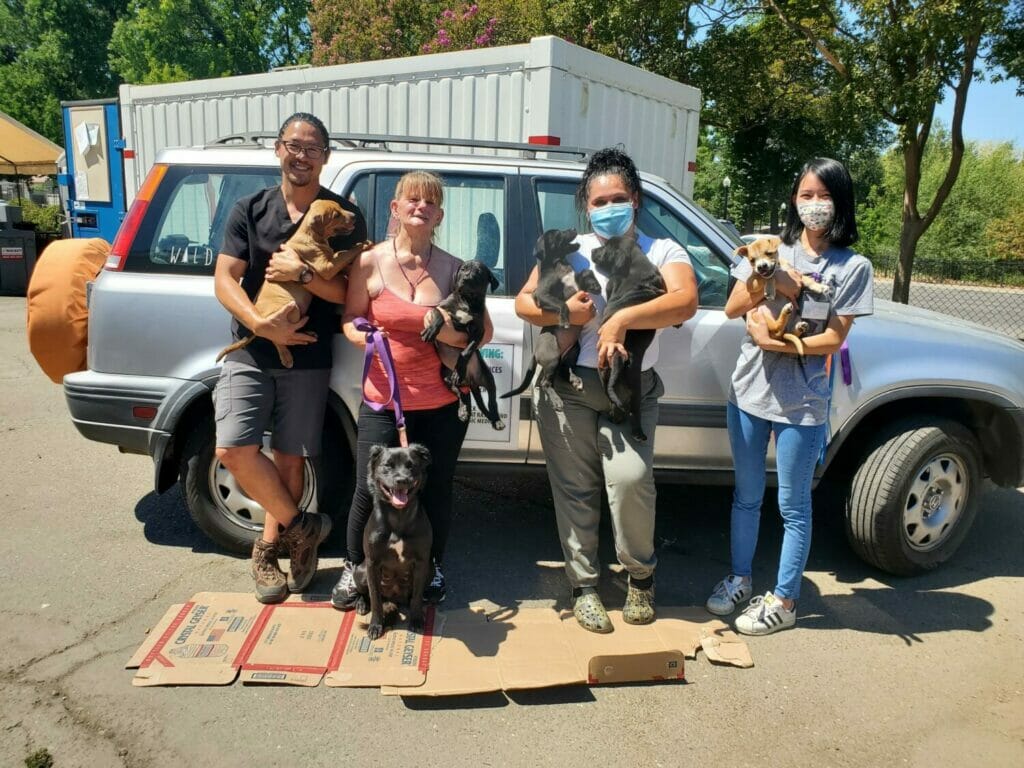