WesternU
College of Osteopathic Medicine of the PacificMedical SciencesProspective Students 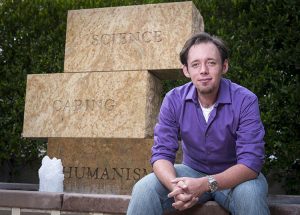 Shortly before his 19th birthday, Sean Wyman started blacking out. Everyone was concerned about his health, but what concerned them most were his blue lips. His 19th birthday became a life-altering event: He was diagnosed with pulmonary hypertension (PH). Having blue lips (and nails) is a fairly common symptom, called cyanosis, of PH.

PH is a rare pulmonary disease that occurs when there is a buildup of pressure on the right side of the heart, typically due to constriction of the blood vessels within the lungs. High pressure sends many patients into heart failure.

Wyman, a second-year student in Western University of Health Sciences’ College of Osteopathic Medicine of the Pacific, and a 2012 Master of Science in Medical Sciences graduate, realized there were few resources available for children with PH.

Inspired to communicate to kids about this condition, Wyman created an animated series about the potentially deadly disease and fittingly called it “Lips Painted Blue.” It’s aimed at giving children and teens with pulmonary hypertension a tool to better relate to and understand the disease.

“I’m looking at these videos as a resource for people who may not be able to explain this outside of medical jargon,” Wyman said. “Children, teens, parents and clinicians can visit this website and watch these videos to get a perspective on pulmonary hypertension disorder in layman’s terms.”

Wyman applied for the Tom Lantos Innovations in Community Service Awards through the PHA, and was awarded $5,000 to produce the animated series.

“Lips Painted Blue” is composed of four videos that document the life of a young boy, Jeremy, and his family as they find out about his diagnosis with the disease.

In the first video, “The Great Race,” Jeremy and his little brother, Shane, race in their backyard but Jeremy has problems running and collapses. His parents know something is wrong with their son, and wait for the next day’s doctor appointment to get answers.

In the second video, “Unveiling PH,” Jeremy’s mother takes him to the doctor with Shane in tow. They learn about what PH is, and what it means to the family.

In the third video, “The New Normal,” Jeremy uses a video blog to discuss what changes PH has brought for him, and looks to help other people like him deal with PH.

In the fourth video, “We’re not alone,” Jeremy introduces you to a few friends who have PH.

“It’s serious, because the arteries in the lungs may thicken, making it harder for blood to circulate properly,” said Dr. Richardson, a fictional pediatric PH specialist in the “Unveiling PH” video.

Dr. Richardson then goes on to tell Jeremy that he shouldn’t participate in sports right now because he won’t have enough oxygen in his body for them, and that contact sports should be avoided.

The video series took more than a year to make. The entire award amount went to animator Phil Harding and his writing team.

Wyman found the voice actors through Steve Van Wormer, a PHA board member who does professional voice over work and whose son, Lucas, has PH. Van Wormer recruited his son and some friends to volunteer their voices, including Charles Klausmeyer, Liam Lecuona, Bellina Logan and Masasa Moyo.

“Many patients refer to pulmonary arterial hypertension (PAH) as coming to terms with ‘the new normal,'” said Rino Aldrighetti, President & CEO, Pulmonary Hypertension Association. “This is particularly true for children.”

The Pulmonary Hypertension Association estimates there are 20,000 to 30,000 PH cases in the United States, a small portion of which are children, said Aldrighetti.

“As a patient himself, Sean Wyman understands the disease and the profound impact on those living with it,” Aldrighetti said. “To use a cartoon format to engage children and their families in the phases of approach to their new normal is to create a great service and to reduce the isolation of this disease.”

Wyman said he’s been able to manage his PH with several medications, which are described in one of the videos. He feels fortunate that he’s currently too healthy for a lung transplant, but knows one day he will need one.

Wyman is excited to see the cartoons deployed on the website. He says a lot of people, especially the animator, writing team and voice actors, deserve special thanks for their hard work.

Wyman would like to see the animated series made into different languages, starting with French and Spanish, and he would like it made into a smartphone/tablet app.

Wyman has created a team for the O2breathe Walk on Nov. 15, 2014 at El Dorado Park’s Golden Grove in Long Beach, California.

“The team I started is ‘WesternU COMP,’ if you would like to join,” Wyman said. “It would be amazing to have one of the largest teams there representing the importance of medical research for rare conditions like this one.”