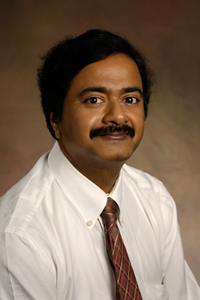 Western University of Health Sciences College of Osteopathic Medicine of the Pacific Professor Vishwanath Venketaraman, PhD, served as editor for a recently-published textbook on tuberculosis, published multiple papers and received funding for his research.

Several of his publications feature the same collaborators, including master’s students with aspirations to enter WesternU doctorate programs. Venketaraman mentors and encourages students to co-author publications to help them with their career goals.

“These publications make their CV very competitive,” Venketaraman said. “Master’s students see benefits short term and long term — getting into the doctoral degree program of their choice and then for residency. Having publications helps medical students when they are applying for competitive residency programs.”

Hicret Islamoglu worked in Venketaraman’s lab while earning her master’s degree from Cal Poly Pomona. She is now a first-year student in the WesternU College of Dental Medicine. Her Cal Poly Pomona adviser, Dr. John K. Chan, recommended she get into research and introduced her to Venketaraman. She is first author on the publication, “Effects of ReadiSorb L-GSH in Altering Granulomatous Responses against Mycobacterium Tuberculosis Infection,” which was her master’s thesis. The authors are Islamoglu, Ruoqiong Cao, Garrett Teskey, Karo Gyurjian, Sebastian Lucar, Marcel P. Fraix, Airani Sathananthan, Chan and Venketaraman.

Venketaraman made a point to introduce Islamoglu to College of Dental Medicine faculty while conducting research in his lab, knowing her goal was to become a dentist.

“Dr. Vishy is an amazing mentor,” Islamoglu said. “He is in the lab every single day. On days we needed him he’d sit for an hour to help us come up with solutions.

“Whenever we accomplish something he pulls you aside to congratulate you. He’s very supportive,” she added. “Being in his lab was an amazing experience. He got me interested and passionate about research.”

“(The publishers) asked me to put together a book on tuberculosis,” Venketaraman said. “TB kills two million people annually worldwide. There are 10 million active cases of TB recorded every year. TB is considered the No. 1 killer disease, killing many people in developing countries. They wanted me to put together a textbook that would compile state-of-the-art, cutting-edge findings and the most recent breakthroughs in TB, whether in diagnosis, treatment or understanding pathogenesis.”

Venketaraman received $50,000 from Your Energy Systems. The company has provided funding for his research for 10 consecutive years, totaling $425,000.

“I’m very grateful to them for giving me committed, consistent support over the past 10 years,” Venketaraman said.