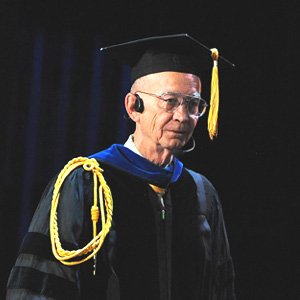 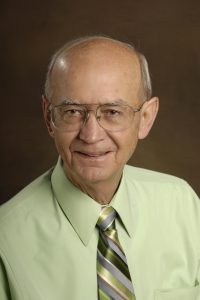 As the architect of Western University of Health Sciences’ Commencement ceremonies, the designer of its anatomy labs, and an early adopter of computers on campus, College of Osteopathic Medicine of the Pacific Anatomy Professor James May, PhD, has had an impact on just about every student who has walked the campus Esplanade.

“Dr. May has been a consummate leader here at WesternU.  He was an early pioneer in the effective use of computers in the teaching of histology, and for several terms served as chair of the faculty senate,” said WesternU Provost and Chief Operating Officer Gary Gugelchuk, PhD. “When issues arose, his calm, careful approach always gave me the confidence that, working together, they could be solved. The University has benefited greatly from his 35-plus years of dedicated service. His efforts have been a key component in building the University that it has become today.”

May, who also chairs COMP’s Anatomy Department, joined COMP in August 1981 and will retire today, January 3, 2017. He earned his PhD from the University of Southern California and worked for several years at Louisiana State University School of Medicine in New Orleans. COMP administrator Nadir Khan, PhD, was recruiting faculty members at an anatomy meeting in Florida in April 1979 and invited May to take a tour of campus. May, a Southern California native, toured COMP while visiting family later that year.

“I was eager to join a new upstart school and help it grow,” May said.

May worked as a bank officer at Bank of America for 10 years prior to going to graduate school. He took management training courses and also had a background in computer programming. When he first joined COMP he bought an Apple II computer in Pasadena.

COMP’s registrar at the time was recording grades in a journal and converting them to grade point averages, which was time consuming. During one Labor Day weekend, May wrote a prototype program that kept track of students’ grades and calculated GPA. He was the Supervisor of WesternU’s Willed Body Program in Pomona and Lebanon and developed a modernized database for those departments. He developed the early software for the Offices of Clinical Rotations and Admissions. He also developed software for a Scantron system that COMP used to score exams for 20 years, and he designed COMP’s anatomy labs in Pomona and Lebanon with a CAD (computer-aided design) program.

“If you can do it, a computer can also do it, but faster,” May said. “It’s a matter of telling the computer what to do and how to do it. The bottom line is some people sit and work crossword puzzles as relaxation. I write programs. It’s a very good self-accomplishment when it works.”

In 2008, May digitized his Kodachrome slides and created a web-based histology atlas. Students can view the atlas at home or in the classroom using a web browser, instead of having to buy a microscope and block out lab time.

“We use a computer as if it were a microscope,” May said. “With microscopes, some people had a hard time focusing. They would get headaches. Now, the tissue is on the screen with much better resolution. Whenever I get evaluations from students on course lectures, they always indicate how much they love virtual histology.”

May joined COMP’s Commencement committee before the first ceremony in 1982. The next year, WesternU President Philip Pumerantz appointed him committee chair, a position he held for two decades before passing the torch to Vice President for Enrollment Management and University Student Affairs Beverly Guidry, EdD.

Guidry started in September 1982 as a university recruiter. She had an office next to May, and he introduced her to computers.

“When I was working on my master’s degree, Dr. May mentored me and assisted me in analyzing my data using the computer,” Guidry said. “He took a lot of time he didn’t have to take, a lot of personal time to make sure the data analysis for my master’s thesis was correct. I really appreciate that.”

May decided to retire while he’s still healthy. His wife wants to travel to Ireland and Scotland, and they will spend time with their son, daughter, five grandchildren and great-grandchild. May said he enjoys teaching and will miss it, although he already has plans to return in February for a guest lecture.

“I tell faculty, ‘Basically, you’re an actor. You have to command the attention of the class, the audience,’” May said. “The philosophy I have is we’re not teachers. High school teachers are teachers. Our role as instructors is to make the student’s studying easy by presenting material in an organized fashion. We give them the resources for them to learn it with quality study time. But I do enjoy the process of going through and enhancing students’ knowledge.”