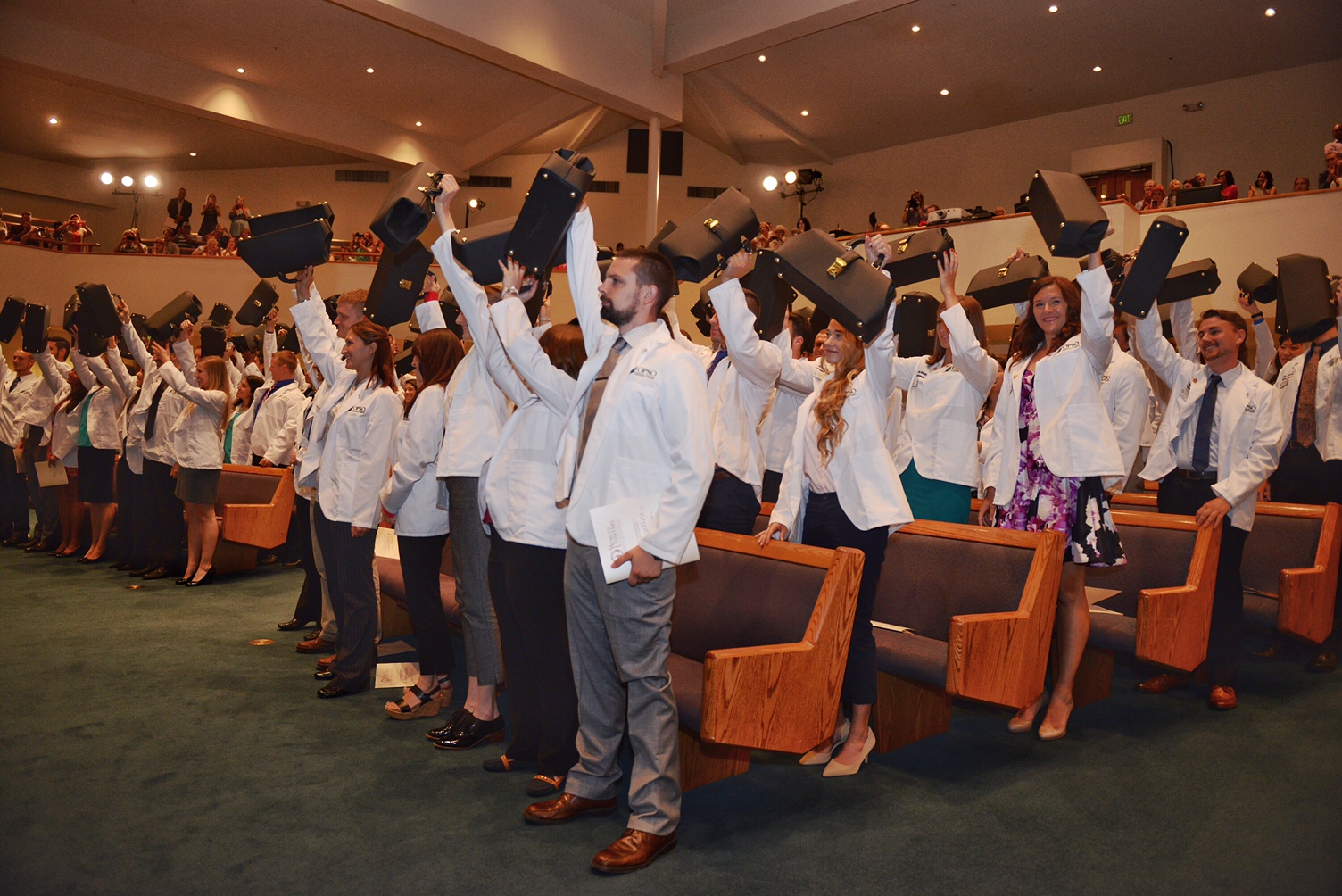 By Rodney Tanaka and Jeff Keating  •  6 years ago 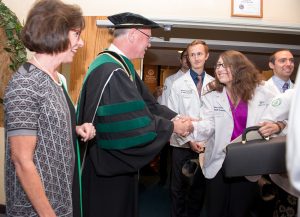 The Pacific Northwest campus of Western University of Health Sciences welcomed its newest class of osteopathic medical students Friday, July 29, 2016, including one new “matriculant” who presided over the ceremony, declared the academic year open, and otherwise continued to mark his first official event as president of WesternU.

Daniel Wilson, MD, PhD, welcomed all 108 members of the College of Osteopathic Medicine of the Pacific-Northwest’s Class of 2020 to the 2016 Convocation and white coat ceremony. He described how happy he was to be in Lebanon, and noted that “as it happens, Sandy (his wife) and I are also new ‘matriculants’ at WesternU, and share in the delights of joining the university family.” Sandy Wilson then welcomed the students and their families in brief remarks from the Convocation podium.

What the Class of 2020 has accomplished simply by making it to medical school is remarkable, said keynote speaker Alissa Craft, DO, MBA, vice president of accreditation for the American Osteopathic Association, and formerly COMP-Northwest’s vice chair of pediatrics and director of curricular outcomes.

COMP-Northwest’s newest students already stand out because they made it into medical school from an applicant pool of 21,000 – roughly three applicants for every open seat in a U.S. osteopathic medical school. More important, “you have spouses and significant others. Many of you have children. You have held jobs and attained careers. Your family and friends already are incredibly proud of you for everything you have accomplished, and everything you will accomplish. You inspire us all.”

Likening the duties of a physician to those of a golf caddie, Craft encouraged the Class of 2020 to “keep your eye on the ball” and to not be afraid to lean on the faculty and administrators who have experienced what they are about to go through as students and, eventually, professionals. These “caddies” know how to play osteopathic medicine’s course, and how to avoid its accompanying hazards and traps, she said.

“Let me introduce you to the uniform of the caddie – these caps and gowns, but also scrubs, and white coats. Beginning today, the people who wear those uniforms, sitting on this stage, are your caddies. We are here to help you navigate the longest round of golf you will ever play – your career in osteopathic medicine.”

The Class of 2020 also was welcomed by WesternU Board of Trustees chair Richard Bond, DO; Provost and Chief Operating Officer Gary Gugelchuk, PhD; and COMP Dean Paula Crone, DO, who reminded the nascent physicians “to always remember at the end of every action, every thought, every deed, there is a patient.”

The students then were cloaked with the white coats signifying their entrance into the health professions, and formally garbing them as healers. They also received their first medical bags, a tradition started by the Lebanon Chamber of Commerce and the community, and now sustained by Osteopathic Physicians and Surgeons of Oregon.

First-year COMP-Northwest student Ali Abu-Alya and his 5-year-old son, Amir, worked together to open his new medical bag after the ceremony. Amir wore a matching white coat in honor of his dad. Abu-Alya said he loved the Convocation ceremony.

“I learned a lot about what it means to be here and my role in the future,” he said.

Abu-Alya said he loves COMP-Northwest’s family environment and knows the next four years will be tiring, challenging and stressful, but worth it. His son had a positive outlook on his future.

DOs Howard Scalone and Charles Hundley led the students in the osteopathic Pledge of Commitment, and they were welcomed by Joshua Nelson, COMP ’19, executive vice president of the Student Government Association, and by Patricia Funk, COMP ’15, who addressed the class from an alumna’s perspective.

Students said they were attracted to COMP-Northwest by the friendly, caring atmosphere.

“I knew I wanted to go to an osteopathic medical school because of its principles, the way they approach medicine,” she said. “I wouldn’t trade the opportunity to practice medicine near my family for the world.”

But she didn’t choose WesternU just because of its proximity to family. COMP-Northwest has a great faculty that truly cares, Hansen said.

The Convocation and white coat ceremony will be repeated on Saturday, August 6 in Pomona, California, which is home to WesternU’s main campus. More than 1,000 students in nine health sciences colleges will participate in the ceremony and don their white coats that day.