Western University of Health Sciences’ College of Osteopathic Medicine of the Pacific and COMP-Northwest have taken a multi-tiered approach to Diversity, Equity and Inclusion (DEI), evaluating and modifying curriculum, recruitment, leadership development, fundraising and research.

COMP established an Office of Diversity, Equity and Inclusion (DEI), and the College’s curriculum is proactively being reviewed to examine implicit bias, explore social determinants of health outcomes and empower future physicians to be effective advocates for their patients. COMP’s DEI Council, comprised of faculty, staff and students, provides oversight and influence in all curriculum, culture and processes for the College. This DEI effort is two-pronged.

“There are Americans that have substandard care and health disparities because of their marginalized identity,” said COMP-Northwest Assistant Dean for Student Affairs and Chief Diversity, Equity & Inclusion (DEI) Officer Mirabelle Fernandes Paul, EdD. “We want to be able to prepare students to serve those people, even if they are not of the same identity. We want to expose students to as much diversity as possible and as much diversity of thought as possible so they can take care of those patients.”

“We have a very low number of Black males feeling like they can apply to go to medical school,” Fernandes Paul said. “There are many young people in this country who could go into medicine and make great doctors, but they do not feel like they can apply.” 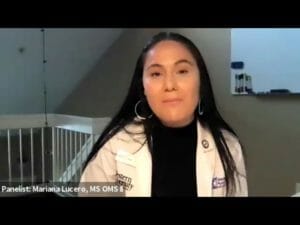 Second-year COMP student Mariana Lucero, MS, served as a panelist on the Diversity Talks discussion “Historic and current factors leading to health disparities among native American people in the US” on Oct. 12, 2020.

Data shows that cost is not the biggest hurdle to underrepresented minorities entering medical school.

“The bottom line is students of color are telling us they are not thinking about becoming a DO because they don’t see themselves (in the profession),” Fernandes Paul said. “If you don’t see more Black men or Native American women who are doctors, then you can’t see yourself becoming one. We decided role models and mentors are very important to sow the seed of physician careers in high-achieving students.”

“The experience of students of color on our campuses and in our facilities very much could add to or reduce the allostatic load that these students carry from their personal lives after they leave campus,” said COMP-Northwest Associate Dean and Anti-Racist Curriculum Director Edward Junkins, MD, MPH, FAAP. “We could add to that load, or we could decrease that load. I would like to think that COMP and COMP-Northwest is a safe space for students to learn, for faculty and staff to work and to thrive, and to help each other.”

The ultimate goal is developing competent physicians who know how to care for people from diverse backgrounds, and that includes students of color trying to address and take care of patients who may not be from a disadvantage background, said COMP Associate Dean and Anti-Racist Curriculum Director Edward Barnes, MD, FACP. DEI also ties into the osteopathic philosophy of whole-person care.

“Going in the room and caring not only about what you’re going to prescribe next or what therapy you’re going to give or even just going through the motions of getting a history and physical, you want to find out more about your patient,” Barnes said. “What are their social needs, what are their cultural needs, what about their psychological and spiritual needs? And all of that is intertwined in the Diversity, Equity and Inclusion curricula.” 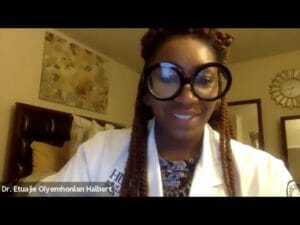 COMP alumna Etuajie Oiyemhonlan Halbert, DO ’19, was the moderator for the “Black men in white coats” Diversity Talks panel on Feb. 11, 2021.

COMP developed a series of Diversity Talks focusing on a variety of topics such as creating a safe and welcoming environment for LGBTQ+ patients, anti-racism work, and health disparities in Native Americans. COMP and College of Podiatric Medicine students who attend a set number of sessions are eligible to receive special recognition upon graduation, called notable characteristics. They must write reflection pieces on what they learned from the Diversity Talks material and complete a capstone project where they apply what they learned in the lectures to their clinical rotations.

Addressing DEI topics requires difficult, draining conversations in order to move forward and make real changes. Because of this, Junkins and COMP Associate Professor Stephanie White, DO, developed CARE teams. Students are assigned to a small group to meet following a DEI curriculum to digest the discussion, engage with each other, to feel safe with each other, and to navigate the topic further, Barnes said. There is no professor in the room. This is a space in time for them to have these discussions.

COMP will put in place a research model in the incoming Class of 2025 cohort to demonstrate the effectiveness of using passionate, trained student facilitators to help these CARE team conversations, which are an important part of learning the DEI content, Junkins said.

“Suffice it to say, a lot has come out in the past 12 months,” he said. “This is something I have been passionate about for decades. We feel like there has been really the infusion of enthusiasm, at the level of the executive offices and leadership of COMP and WesternU.”

DEI efforts have been ongoing in fits and starts over several years at COMP and WesternU. The development of a Humanism Strategic Performance Group at the University level was in motion. But the worldwide demonstrations and protests that arose following the murders of George Floyd, Ahmaud Arbery, Breonna Taylor and others sparked a renewed dedication to social justice at WesternU, driven by students who formed White Coats for Black Lives (WC4BL) chapters in Pomona and Lebanon.

“There is a renewed urgency, and it’s not only students, but faculty are starting to say, ‘I want to get involved in these research ideas,’” Junkins said. “There have been a lot of good conversations. It is similarly riding this wave of social justice, a focus that has been a long time coming.”

A branch of the Humanism SPG – The WesternU Humanism, Equity, and Antiracism Team (HEART) – began working on an overall structure for a new WesternU Office of Humanism Equity and Antiracism, as well as a job description for a Humanism and Diversity Officer – HEART VP.

“This work had been going on for many years,” Fernandes Paul said. “What happened this summer was that the students lit the fire under us. The time was ripe and it coincided with us having the data, so we knew what the status of our campus was. We knew what we needed in broad strokes.” 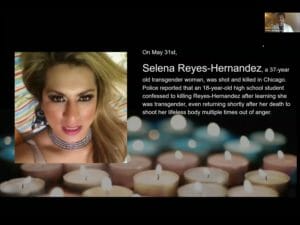 COMP-Northwest’s Equality Alliance Club held a Transgender Day of Remembrance Nov. 20, 2020. Students read the names of those in the transgender community who lost their lives to violence and held a candlelight vigil.

The student voice has been very important. The great thing about students is that they will be our ambassadors when they leave, Fernandes Paul said.

“While they are here, they see themselves as consuming a product at this University, and what they’re asking us is, ‘We need this anti-racism curriculum as an important element that hadn’t been included in their curriculum, which they see as a product,’” she said.

“They were so engaged and energized, we didn’t want to put out the fire and say wait for us,” Barnes said. “We let them run with the curriculum they wanted to put out.”

The DEI Council created a foundation and a structure, with the students in the lead.

“They were riding in a train that was going and we’re behind them trying to hit the nails on the track and make sure it’s staying in place and putting the boards in,” Barnes said. “When they come back around that track again next year it’s going to be a very sturdy, very stable track to deliver curriculum on, with integration of student facilitators.”

As part of WC4BL, students are holding the University accountable by submitting report cards on the progress of the requests they made as a club, Barnes said. Students had the opportunity to sit in University discussions and boards and present to deans.

“I don’t think they are going to lose their energy, but they are all here to get a health professions degree, so to make them continue that level of involvement would be unfair,” Barnes said. “They didn’t come here to drive this. It is our responsibility to make sure that it continues on and it has a strong infrastructure. But we have definitely benefited from learning from them and watching them go and having them help us accelerate the goals that we were trying to meet.”

COMP’s DEI progress has truly been a team effort. This is something everyone wants to see come to fruition, and COMP Dean Paula Crone, DO ’92, has empowered them to make these changes, Barnes said.

The goal is really to spread this responsibility, this calling, to everyone on the council who wants to work shoulder to shoulder, Fernandes Paul said.

“We have a lot of people who are of white identity who feel really strongly the buck stops with them. Racism stops with them. They are going to be part of the solution,” Fernandes Paul said. “We have been able to share that load with other people.”

Fernandes Paul said because of the silo she is in – Student Affairs – she might never have worked with someone in curriculum or anatomy. But she has collaborated with many of her colleagues on DEI issues.

“The thing about Diversity, Equity and Inclusion, it doesn’t matter what your background is,” Fernandes Paul said. “It is a lived experience. And it has brought us together and connected us in ways that could never have been possible if this council didn’t exist.”