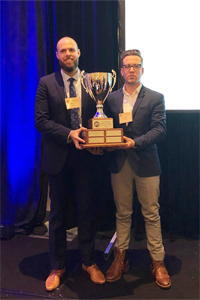 College of Osteopathic Medicine of the Pacific alumni Garrett Jones, DO ’16, and Karim Jreije, DO ’16, representing Community Memorial Hospital in Ventura, Calif. as surgical residents, won Surgical Jeopardy at the Southern California Chapter of the American College of Surgeons conference in Santa Barbara on January 25, 2019.

Special thanks to Assistant Professor of Surgery Marian Safaoui, MD, who attended the conference, and Department of Surgery Chair Vivian Davis, DO, for their mentorship and support.